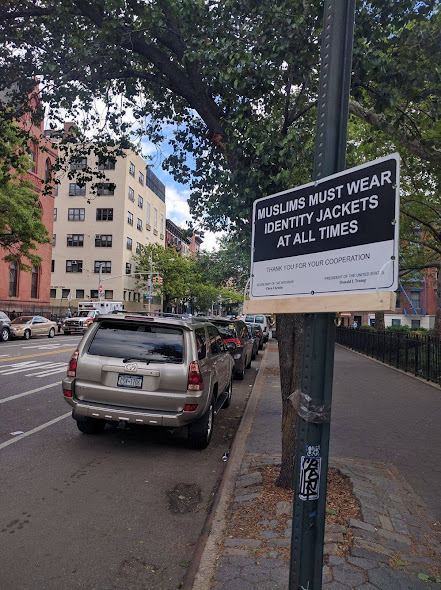 [Photo on Avenue from Monday by Karts]

That fake sign declaring that "Muslims Must Wear Identity Jackets At All Times" and signed by "Donald J. Trump, President of the United States" lasted about two days on Avenue A near East Ninth Street before someone removed it.

There was also one on Orchard Street, per The Lo-Down ... as well as other parts of the city.

The NYPD's Hate Crime Task Force is investigating a potential ant-Muslim harassment case after an outrageous sign was discovered on the Upper East Side.

Police are looking for the suspect who hung the sign that read, "Muslims must wear identity jackets at all times," and placed a yellow jacket next to it.

The sign was found near the ambassador of Yemen's residence.

Police have canvassed the area with signs asking for any help identifying who put that sign there.

Added: H/T to anonymous commenter on the previous post!
Posted by Grieve at 9:30 AM

Email ThisBlogThis!Share to TwitterShare to FacebookShare to Pinterest
Labels: Donald Trump, signs around the East Village

Its not hate speech, its commentary. Morons.

gee I accept that I'm not the most loved commenter around these parts but a hat tip would have been nice :(

Good. This was a bad idea gone wrong. The sign crossed the line by looking way too official, affixed to city property, without showing a hint of irony. Worse, it targets Muslims, who Donald Trump has already unapologetically victimized by calling for a total travel ban. Putting Trump's name on the sign in small letters doesn't make it a commentary on Trump as much as it scare Muslims, especially kids who probably wouldn't understand that the sign is fake. Some art student is about to get their 15 minutes of fame, in jail. What usually happens afterwards is some greedy PR hungry gallery over in Chelsea signs the artist, sells their work for way more than it's worth, and makes them even more famous. Let's hope it doesn't happen this time.

Either the NYPD (or somebody in the neighborhood) doesn't like/recognize political satire or there are a lot of Trump supporters in NYPD brass.

Shouldn't that be the ANTI-Hate Crime Task Force?


WTF? The bureaucratization of being a New York City Smart Ass, AND a COLLLLOSSAL waste of human energy, money and BRAINS!!!

@Ken at Ken's Kitchen: Sorry, wrong, they went way too far. They also posted way to official looking yellow flyers all over a few neighborhoods. It won't be hard for NYPD to track them down from all their pictures posted on social media. And if they didn't think this was bad thing they would have come forward already to explain the intent of their little art project and clear up any confusion. Instead they are posting anonymously bragging about their work. They only remain anonymous if they have something to hide.

Political satire is part of our freedom of speech true however one could argue that the "identity jackets" was never mentioned by Trump (that I know of) so was this sign really satire? The author of these signs went too far by placing one near the Yemen ambassadors residence at that point it appears more like hate speech intentional or not.

This isn't satire, it tells Muslims thay have to wear special Muslim jackets. How is targeting the same people that Donald Trump is targeting considered satire? And are any of these people, or those defending them, Muslim? I doubt they are. Had they directed the signs at Trump they woudn't be under investigation for a hate crime. Even if they only get charged for the illegal signs and not for a hate crime they can look forward at minimum to a big fine, a police record. plus legal fees and court costs.

Got it. It was people in the neighborhood.

Yeah, Some people here clearly don't get political satire.
The "artist" may have done a bad job at political satire, but that's what it is.
If police arrest him (like they would under a dictatorship) he won't be in court for more than 5 minutes.

Actually more of a commentary on the "Shariah Controlled Zone" posters, rather than on Donald Trump.

Is the burqa an identity jacket?

So ... if your government lies you into war after war, lies about your economy, lies about why it spies on each and every one of you ... is that not an express of hate by one group against another? They don't treat you like the imbeciles that you because they luuuurve you. Which is to say, in a sane world detectives Tubbs and Dunkin would be wouldn't be squandering resources on idiotic snark and investigating the real haterz.

@Ken at Ken's Kitchen, he's already had a couple of endorsements from police groups:

This is a really ham-handed attempt at satire. If you look at their yellow flyers on Buzzfeed, you'll see that they say that according to the Safe American Act, Muslims who don't wear their identity jackets are subject to 5 years in prison. They even use an official looking seal and the real signatures of Christie and Trump. I don't see any humor in this, and their political message is drowned out by the fact that their signs and flyers would likely be disturbing to many Muslims.

It may be over the line, (I went to the Buzzfeed link) bad taste, satire gone bad, etc.

But it's not a hate crime.

If the signs had said that all Jews or Blacks or LBGTs had to wear those jackets or face 5 years in prison, I don't think too many people would be defending this so-called art project. When these geniuses get arrested they will probably say it was a "social experiment" gone wrong without realizing that they themselves are the social experiment gone wrong.

Wait until the Super Size me voters of America elect Trump, those signs will be his first initiative.

Hate crime? This is so clearly and obviously a satirical art piece. Please.

Are the yellow jackets a reference to the yellow star worn by the Jews? [pink triangle if you happened to be gay]. Whatever the artist(s) intended, the satire fell flat. That the signs and flyers appeared in other parts of Manhattan probably means that this was a collective activity. Sometimes the best of intentions fall flat--this is one such case in my opinion.

Hate crime? Harassment? Don't you have to harass a particular person? But I agree this is social commentary. Giovanni, Ben, and various anonymous posters: do you expect all your art or commentary or political theater to come with a warning label? It's called a free country.

This sign is obvious satire and political speech. While some may think its in poor taste, whether you like it or not is irrelevant. It is protected by the First Amendment as it should be and any attempt to prosecute would be frivolous and likely result in sanctions against the city. They would be better off pursuing real acts of hate crime, e.g LBGT people who deal with thinly veiled insults and assaults almost everyday.

These signs are not protected by the First Amendment since they are illegally attached to City property. They can be charged with vandalism and graffiti. Since Donald Trump has been targeting Muslims the rate of hate crimes against Muslims has increased, so the NYPD has no choice but to investigate it as a hate crime. If they had spray painted swastikas on a Synogogue and called it art, would you still say it was protected speech? Of course not.

This sign is obvious satire and political speech. While some may think its in poor taste, whether you like it or not is irrelevant. It is protected by the First Amendment as it should be and any attempt to prosecute would be frivolous and likely result in sanctions against the city. They would be better off pursuing real acts of hate crime, e.g LBGT people who deal with thinly veiled insults and assaults almost everyday.

"City property," "over the top," etc etc are all true, but this is very very obviously a satirical, political act. If the NYPD wants to silence this effective commentary, it's because it does a good job of exposing their boy Trump for the effing racist pig he is.

Amazing how many squares there are living here now. Reading these comments, I felt like I had moved to the suburbs and was at a meeting of PC moms who didn't want Timmy's feathers ruffled.

The NYPD had better familiar itself with the First Amendment. That is protected, political speech 100%.

There's a long list of SVA and Parsons art students getting arrested y the NYPD for much less than this.

Disregarding the content on the signage, what exactly is the illegality of attaching an object to a city signpost? How can it be vandalism when nothing was ever damaged or defaced? I lock my bike up to these things all the time as do a lot of other people. What if my bike has an offensive sticker or two? Does that make me a vandal? Not trying to be an ass here just trying to parse exactly what kind of crime this is, or if it technically even is a crime. You have to be rigorous when interpreting the law. In my America at least.

Man I freakin hate Trump but you know what? I'm gonna watch what I say about him when I am out in public, and definitely when I am using my phone now. WTF is going on here.

Satire usually has some hint of humor which this stunt lacks. Why stop there. Why not draw a swastika on the sidewalk. Ass hats.

"what exactly is the illegality of attaching an object to a city signpost?" - this is likely covered by the DOT, S 1114 "Display of unauthorized signs, signals, or markings" and/or 1115 "Interference with official traffic-control devices, railroad signs or signals and other highway appurtenances." - details here: http://ypdcrime.com/vt/article24.htm#t1114

The only good satire is very obvious, so that even the most ignorant can "get it." Otherwise it isn't good satire. It is even better satire when the satire explains itself immediately after being made.

I guess we really need a review of the meaning of free speech. Oh wait a minute that was the previous local they thought to be America where free speech was the public discourse that lead to reason.