Historic 25 Bleecker St. one step closer to being demolished for a 6-story building (w/ penthouse) 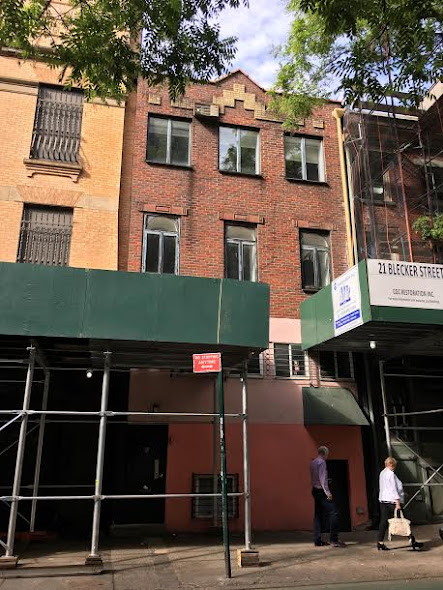 Over in the NoHo East Historic District, the Landmarks Preservation Commission approved a proposal to demolish the existing 25 Bleecker St. to make way for a new mixed-use building, as New York Yimby reported.

The existing three-story structure was originally constructed around 1830, though as NYY points out, its facade was heavily altered in 1984 ... there was also the addition of a rear extension.

Plans here call for a six-story (plus penthouse) mixed-use building with three residential units. Here's a look at a rendering... 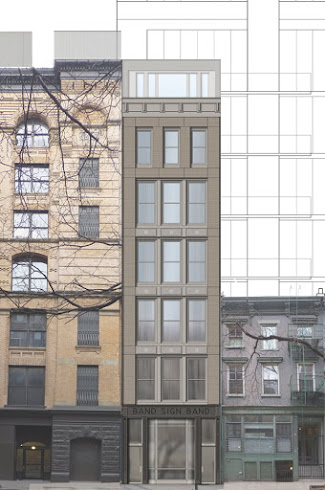 
Commissioner Adi Shamir-Baron struggled with what to do here, but in the end decided the approach was “excellent” and supported it.

On the matter of demolition, Commissioner Michael Goldblum said there was still some historic material there, but not on the front. He said the only case for maintaining the existing structure could be volume, not appearance. Of course, its neighbor is seven-stories-tall. “What are you holding on to?” he asked rhetorically, concluding that the remnant doesn’t rise to the “gotta keep it standard.”

Community Board 2 recommended against the approval, as did reps from the Greenwich Village Society for Historic Preservation and NoHo-Bowery Stakeholders, among others.

The plan still needs the approval of the Board of Standards and Appeals.

Head over to New York Yimby for more on the story, some renderings and a cool shot of No. 25 from the 1940s.

Previously
Posted by Grieve at 4:15 AM

Remember those t shirts from a few years ago that read "Go ♥ your own city"? We need an updated one that reads "Go develop your own city."

I sincerely doubt, when it's time to tear this middle finger of a building down, that a single voice will be raised in protest. NOTORIOUS, I second your excellent idea for a shirt.

"Progress! Embrace change!"
Progress as when Penn Station was demolished so we could get an arena and some more international style office buildings?
Progress as in no developer should be prevented from demolishing virtually any building so they can make a profit?
Change for profit never equals progress.

Define progress? Is progress saturating the market with buildings the majority of people can't afford to live? It's not progress, it's greed, collusion, and carpet bagging. Now please go ride your CityBike off into the sunset.

Hey the rendering looks like shit! I am shocked.

The building has been defaced. It's just not worth the trouble unless it would be restored. But why would anybody want to restore an ordinary building. get over it. There are other issues to whine about.

Is this near the old yipster cafe

I think the Landmarks Preservation Commission should be elected. Conversely I don't think unelected people should be given the power to give a thumbs up or thumbs down to a building like Mr.Goldblum.

What are we holding on to? A quirky looking, unique, interesting building. Or maybe we're not "holding on" we're holding OUT for a better replacement not the grim, ugly piece of shit that's going in this building's place.