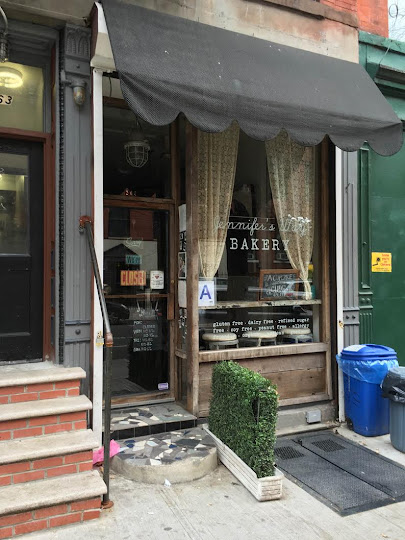 The actress, who was diagnosed with celiac disease five years ago, opened Jennifer's Way Bakery on East 10th Street between Avenue A and First Avenue in 2013. She responded to the report (also picked up by Fox News) on Facebook...


She also posted photos and a video of herself at the bakery yesterday.

As for the lawsuit, here's what Esposito had to say about it via Twitter...

What's even better? case has been DISMISSED entirely! No fleeing & the case dismissed? guess u got my name correct tho @FoxNews @PageSix

I think she left the country because she was about the be arrested by the Grammar Police. :-)

and people accuse vegans of being drama queens

Something tells me that Jennifer Esposito is a gluten for punishment.

It is sloppy. However, I like that it seems very human and emotional — from a real person rather than a scripted lawyer or other robotic mouthpiece.

I guess this is a slow news weekend. If anyone can explain to me why this story merits attention, I'd appreciate it. Who really cares?

I was watching Anthony Bourdain's episode on Denmark the other night and it looks annoying as fuck. Particularly the twigs and grass dinners they were meticulously arranging with tweezers before making it disappear with one bite. Maybe it's my Viking ancestry but give me a big plate and put a carcass on it.

What were we talking about? Jennifer Jason Leigh? Georgia was a great movie.

Yeah, the Denmark Parts Unknown should have remained unknown. I stll have the Rolling Stone issue that has Jennifer Aniston almost naked on its cover.

Been in that place many times and have never seen her. Never. Not even once.

Uh, obvs she was in the back picking the gluten out of the flour!?

Anon 9:46am: I've seen her in there baking. She's very pretty and nice.

I always wondered why Jennifer Garner never really made it big.

L7 was my favorite band in the 90s. Good to see Jennifer Finch hasn't lost her moxie!

Moxie, isn't that the name of the hotel being built by Webster Hall?

Anyway, Jennifer Finnigan, who starred in The Bold and Beautiful (remember when NYC was full of soap opera stars? Now it's full with Moxie hotels and mixologists) speaks fluent french, fyi.

Don't be fooled by the celiac she's got, she's just Jenny from the block!

Bummer Jennifer Love Hewitt left Criminal Minds. I was just starting to like her character.

I read Jennifer Lawrence tripped at the Oscars on purpose for both the publicity and to demonstrate she's a "regular person" like us. Interesting theory.

@ NOTORIOUS- I liked her in "Last Exit to Brooklyn".