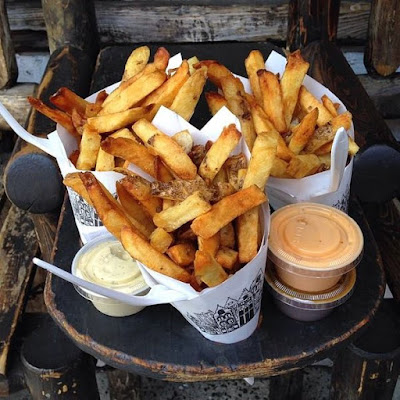 She bowed her head and her shoulders heaved with sobs. The two young men, Mr. Locón and Mr. Figueroa, she said, are constantly on her mind.

“I don’t want it to be an opening with fireworks and fanfare,” she continued after a pause. “We are insignificant compared to the impact this had, compared to what happened to the families and loved ones. We’re French fries.”

They will be running with limited staff and hours for the next two weeks, per the Pommes Frites Facebook page.

The new location is at 128 MacDougal St. between Bleecker and West Third Street.

Previously on EV Grieve:
With space too expensive in the East Village, Pommes Frites will reopen on MacDougal Street
Posted by Grieve at 1:00 PM

God bless you Susan. You are a beautiful human being.

Lots of love for Suzanne and her business. I'm touched by her comments:

“We are insignificant compared to the impact this had, compared to what happened to the families and loved ones. We’re French fries.”

I am also moved by her comments. She sounds like a caring, thoughtful person.

This is the West Village's gain, and the East Village's loss. Ms. Levinson represents the best about NYC - she is the opposite of the introverted narcissists who increasingly populate our city.

I wish Pommes Frites success in their new location. The owners are the kind who help make a neighborhood great (just like the people at B&H, Stage, etc.).

What scummy landlords & developers will never comprehend is this: it takes really GOOD PEOPLE + TIME to make a great neighborhood. The landlords who count on people only living in an apartment for a year or two (for quick rent increases on fast turnover) fail to understand that enabling transient residents on such a large scale negatively impacts ANY neighborhood.

Thank you, Pommes Frites owners, for your concern and compassion. Let us never forget the lives lost on that awful day in March 2015.

Hey 9:08pm there are dorms in the West Village on University Place, Mercer Street, Washington Square Park West, and I think another street or two, and they receive zero complaints. There's also an NYU dorm on Lafayette Street a couple of blocks below Canal Street which also gets zero complaints. Therefore NYU dormers outside of the EV behave. I'd even include the dorm on E.14th in the old Palladium space as I consider that part of Union Square not the EV.

There's an NYU dorm on Third Ave. between 23rd and 24th Streets. No problems with those students.

Almost all below 14th street up to Chambers St. are NYU dorms.

- Ben's Pizzeria (better slice than ANY in the EV)
- Generation Records, Bleecker Street Records, and Rebel Rebel (record stores better than any on the EV save Other Music which is closing late next month)
- Frank's Hairstylist (Italian run barbershop so oldschool they have their phone number with letters in it) vs. overrated Astor Place,
- The original Mamoun's Falafel (better than the one on St.Mark's Place but the new location looks like and both are kings of the NYC falafel)
- IFC Center, Film Forum & Angelika Theater vs. what filmhouses for independent and underground movies in the EV
- Cozy Soup 'N' Burger, Waverly Restaurant, Washington Square Diner, and Hector's Diner vs. ZERO
- Cafe Reggio and Cafe Dante (new ownership for the latter but still nice and more or less the same place with some expected new aspects)
- West 4th Street basketball courts
- Papaya Dog
- Washington Square, Leroy, and Abingdon Square Parks (first one buries Tompkins Square Park, sorry - no fake homeless/homeless til it hits under 50 degrees Farenheit crusty pieces of shit there either)
- Joe's Pizza
- Generally well behaved NYU students and people under 30.

The West Village has for the most part kept itself intact architectually. Wayyyy more businesses which have been around for decades and longer than I've been alive. It's just more interesting and energetic.

Chloe Sevingy is really stupid as she could've simply moved from the East Village to the West Village and had an even better pad and neighborhood than Park Slope yet still remain in Manhattan. LOL @ her moving to Park Slope. She's a Park Dope :)