So long to the Yaffa Cafe mural 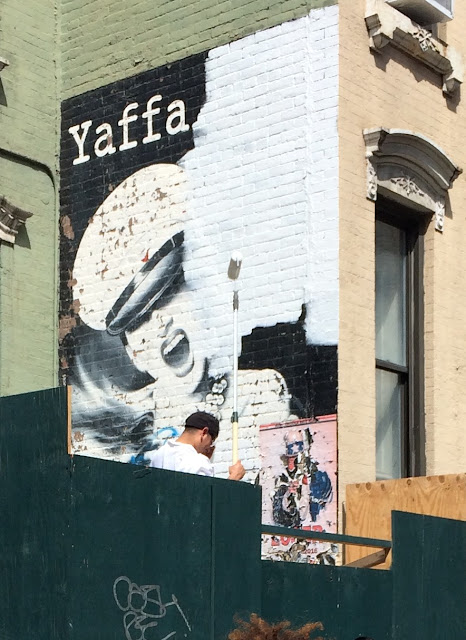 Earlier today, a worker painted over the Yaffa Cafe mural on St. Mark's Place between Avenue A and First Avenue, as this photo by Allen Semanco shows.

Not really a surprise. The cafe closed for good after 31 years in September 2014, as we first reported.

The mural went up in 1993. It was a portrait of Lika Ramati, the former co-owner of Yaffa Cafe. The New York Times has more about the history of the mural in this article from 1999. 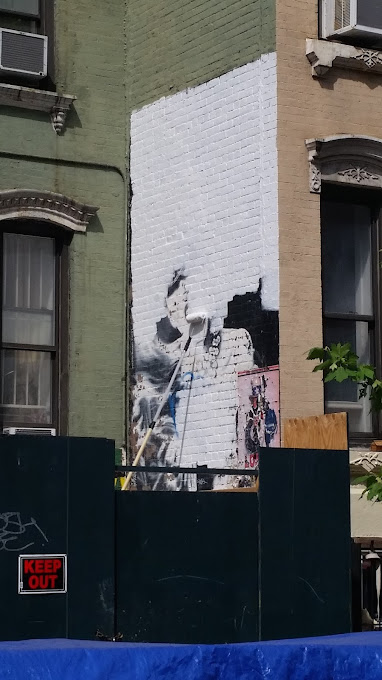 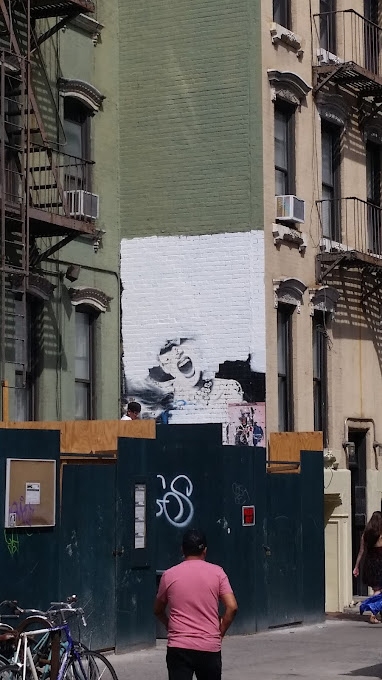 The owners of St. Dymphna's down the block are reportedly opening a Portuguese restaurant called Taberna in this space. 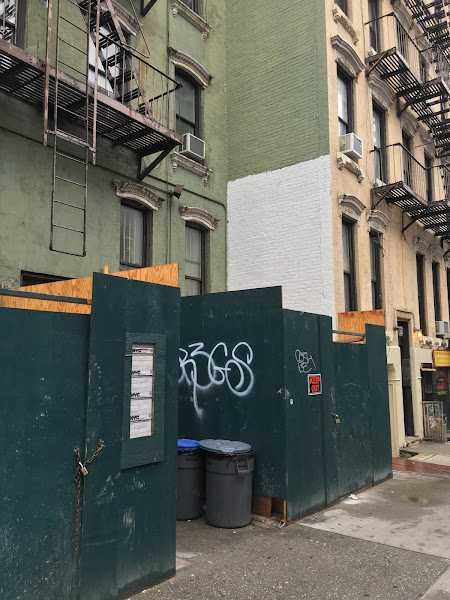 Wow. That's another little piece of 'my' New York gone.

This hurts almost as much as Hollister painting over the iconic DKNY mural.

If memory serves me, that was the third Yaffa mural at that location. The first was identical to the one being painted over, and the second was a mural of the proprietrix in a fancy headdress.

what's the point of doing that? what harm does it do to the building owner to preserve a little bit of history? unless they are going to use/sell the space for advertising, i guess. still, it's sad.

Self-portrait? You mean she painted the very mural herself? If not, it is a portrait.

Out with the old, in with the new, I always say.

Yaffas was crap. Sure, lots of you are still remembering the yaffaa of the 90's. But seriously? Had you been in there in the last 10 years? It sucked!

I would feel bad if Yaffa had remained the great place it was in the 90s. But the quality of food and service took a nosedive in recent years. It's too bad.

Yes, I ate their frequently and was served the last meal the day they were shutdown. The food was good, service friendly and the space possesed a neighborhood authenticity Cafe Beetle Juice would kill for.

Why did it go downhill? Was it the same management all along? It is so sad what happened to this place. I also used to love Old Devil Moon. That place was also great for years, but then the owners started taking a hands-off approach, leaving the employees to run the show, and the once delicious food got really bad, and it wasn't unusual to wait for 45 minutes for your dinner to arrive.

I never like this mural if I'm allowed to voice my opinion, looked like Sandra Bernhardt pinching one out.

They should have painted it the same color green as the rest of the building. It looks weird now. Weirder.

The owners used to live in the apartment above Simone. Once they moved out of the neighborhood, things went downhill at both restaurants. Managers don't usually care as much as owners.

SO loved this mural. It was one of the principal visual posts of the East Village to let you know that you were definitely in the East Village. I remember the one before it as well and I have print postcards of both stashed away somewhere. Every time I walked down St. Marks to either go to Yaffa or whatever destination nearby, I always looked up at it as if I were seeing it for the first time. As an artist myself, I appreciated the style. Black and white that seemed to suggest color and energy of movement. A face of a happy, quite possibly drunken reveler enjoying her viva la vida loca.

Now, I understand the mechanics of clearing the old to make way for the new, biz changing hands and all that...but I have to wonder...if nothing goes up to replace it to make that space more than just a painted-over brick section that will surely mismatch the already dismally grimy pea green of the building, what could've been the harm of leaving it up there to fade away gracefully by the elemental touch of time like old-school wall signage from days of yore?

Glad to have known this place with my five senses before it all becomes glass and greyness, ey!

Old Devil Moon was the best! If Rob Zombie ever opened a burger joint, it would look like ODM. God it's depressing to think about the places we've lost.

And to rub salt in the wound: Dojo

Always hated that thing. Somehow represented a shift from understated to overstated cool.

@NOTOIOUS I went to Dojo on West 4th St over the weekend. The Soy Burger Dnner is still amazing, and the carrot ginger dressing is as good as ever.

I am going to need therapy for this now :(

"Always hated that thing. Somehow represented a shift from understated to overstated cool."
So well said, thanks.

If it was not Ok to paint over it, then when would it be? Two years? Five years? Ten? I say this as someone that really liked the mural, but nostalgia should not hold the present and future hostage. Things have moved on and there's no point to maintaining a grave to Yaffa on the wall.

From 1993-2016 there that mural was. I never remember it being tagged or defaced. It was one of my FIRST East Village memories as I was staying on E 9th between 1st and A in '98 and Yaffa Cafe, Little Poland, 7A, Odessa, Vesleka, Cafe Gigi, Cafe Mogador etc were our late night (and early breakfast) hangouts.