East Village is No. 1 in Lower Manhattan for garbage, noise and rodent complaints, study finds 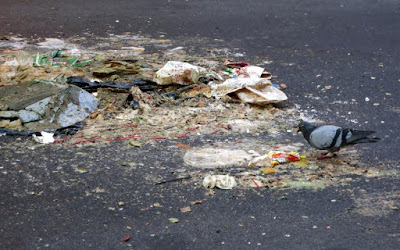 DNAInfo has the results of a RentHop study tracking 311 complaints in six Lower Manhattan neighborhoods.

Here's how this neighborhood stacks up vs. No. 2 Chinatown:

You can find an interactive map and more results from the survey here.
Posted by Grieve at 8:10 PM

aren't we also number one in number of bars?

This study is brought to you by Chloe Sevigny.

Is this data reliable? Has anyone actually walked around the two neighborhoods and not noticed Chinatown smells way more of rotten produce than East Village? You have one neighborhood where most people are English-speaking and in their 20's, and another where English is not the primary language and a much more diverse age demographic. Do these two groups complain the same? Would an elementary school kid and a 80yo grandma in Chinatown call 311 as frequently as as 25yo in East Village?

And why hasn't anyone thought of solving the rat problem with feral cats?
http://www.nytimes.com/2016/05/24/nyregion/gentrifications-latest-victims-new-yorks-feral-cats.html

Love it! All the newbies paying exorbitant prices for their 'luxury' condos so that they can live a privileged existence... and they get all these perks! No wonder why they Seamless, Amazon, Fresh Direct, and Netflix and Chill most of the time and never leave their multi-million condo paid for by mommy and daddy or an angel investor.

What this means to home owners and building owners is more fines from the sanitation department for things like a candy wrapper in the gutter in front of a property. This is what happened to me recently. Watch for vans filled with ticket writers on your block next trash day.

As I've said previously, on the weekends especially is a period I loathe because it belongs to the bros, sorority girls, bridge, and tunnel crowd who show no respect or utter regard for its residents. The rest of us, who live here, who have to contend with the bullshit, non-sense, and noise, often leeaves me to wonder if remaining here is ultimately worth it. I am not surprised by this. It is old news. Yet, somehow the rents are enormous and the size for which we live to pay are tiny. And the rats, well they are part of our lives. So, what can one do?

I read a comment like this every day. Same old complaints.These are your big problems and you call others privileged? Whatever.

It's bad enough we have to deal with this but I can't believe the newbies paying big bucks don't mind living near bars like Doublewide that generate so much noise. If I had the money, I would move to a quieter neighborhood.

Pretty much confirms all her points.

@ 11:03 PM: Unless you pay people to go around and weigh the garbage and count the rats, you'll have to rely on complaint data. I agree there's probably a greater likelihood of residents complaining in the EV than in Chinatown.

noise complaints were from surrounding businesses, so you can blame people who go out and get shitfaced and lose the ability to respect others. There's plenty of people in this neighborhood who have fun and aren't loud enough to wake up sleeping families-- but you don't hear about them.

as for the rats- I never see them indoors, I rarely see them scurrying around garbage on the streets and I commonly see them in Tompkins and around subway station tracks all around the city... who cares, it gives the hawks something to eat and they're not spreading disease. have some tolerance for life- I'm less disgusted by rats in the park than privileged packs of bros in the neighborhood.

Correct on all fronts.

The garbage problem is because of the transient visitors to the neighborhood who come to drink, eat and be disgusting by throwing their garbage in the streets, urinating in the streets and throwing up in the streets. This problem is exacerbated by the NYC Sanitation Department that just refuses to put out more trash receptacles or pick up more than once a day. By the time the evening rolls around the trash cans on the corners are already overflowing. Where do they expect all the night time visitors to put their trash? The obvious answer is the street, because there is nowhere else. Until the NYC Dept of Sanitation takes proper stock of the problem and addresses the fact that the cans cannot possibly hold the amount of garbage generated by the public on a daily basis, this problem will continue, which...contributes to the rodent/vermin/pest problem in general.

I love how people just can't believe the East Village is dirtier than Chinatown. Why can't they believe it? I think the EV has taken the number one spot because of what happens on the weekends. It's a shit show around here with all the frat and sorority types going nuts.

I see plenty of "old school" neighbors and their kids dropping wrappers and food containers on the ground it's not just the privileged most of you are complaining about.

I often have to carry my trash (paper cup or what ever) several blocks before I can find a trash can that isn't overflowing. Some intersections don't have cans at all. WTF?

I just posted about how the West Village is better than the East Village and I'm right.

Just take a walk down any street west of 7th Avenue. Clean, very few rats, and quiet but not too quiet. There are bars but they keep the peace.

The East Village is a former artists' haven turned NYU bro/shebro, hedge funder, neoyuppie hive. Yes some people remain but most of them are one rent hike away from being tossed out.

The West Village should be a motivator for the East Village but it isn't. The WV doesn't let chain stores overrun it like the EV. There's one McDonald's and it's been around since the '60s or '70s. No 7 Elevens or Burger Kings. Maybe one or two Subways. Minimal Dunkin' Donuts. Not too many Starbucks.

What's the first thing most people see when they enter the EV? Walgreen's, K-Mart, CVS, and that fuckin' ugly piece of shit IBM Watson buiding. The buildings 0n Third Avenue (Continental, one of the EV's THREE McDonald's, Ray's Pizza Cafe) flanking St.Mark's Place have been bought by developers and will be raized for even more ugly shit. Bowery is hideous. Other Music the ONLY EV record store which sells music by active underground/unsigned bands is closing June 25th. It's over.

@3:48pm: How, exactly, would the West Village be a "motivator" for anywhere? "The West Village doesn't let chain stores overrun it" - uh, what do you call Bleecker Street? It's wall-to-wall "chain stores" (insanely overpriced, but still chain stores!). Marc Jacobs, anyone?

The West Village's other claim to fame is that - just like the East Village - it's throwing out old local stores (like stationery stores, dry cleaners, newsstands, etc.) to make way for jackass "boutiques" like ACNE STUDIOS. Having walked past ACNE STUDIOS many times for the last few months, I ask you: Who the hell would shop at a place with a name like that? And why didn't they have the balls to go all the way and name the place ZIT CITY? A peek inside indicates they're "curating" clothes, not selling them. Pretension, they name is ACNE STUDIOS.

West Village, be as smug as you want - ch-ch-ch-changes are underway in your area!

YAY, EAST VILLAGE WINS! We beat out all the other nabes. (Winning is good, right?)

5:10pm The West Village would be a motivator because it is cleaner, safer, and better behaved and has far less noise and rats than the East Village. It's also nicer, more interesting, and has way more shopping and entertainment options than the EV.

What chain stores on Bleecker Street? The ones in your mind? Let's start at the very western end of the street which is 8th Avenue and Abingdon Square and end at Broadway. Maison Kayser, Five Guys, Starbucks - hardly chains in the traditional sense considering all three pay fair wages (I think Five Guys does - I know the other two do.) What else? Marc Jacobs is a chain? Barely. When I think of "chain" I think of Starbucks, Subway, 7 Eleven, Domino's, McDonald's, Burger King etc. Bleecker Street between 6th Avenue to LaGuardia Place has Le Poisson Rouge, Bitter End, Wicked Willy's, a cafe which has been around since the '60s whose name escapes me, a really cool old stationery/general store, and a bunch of other places. It's pretty jumping Thursday through Saturday minus vomiting, public urination, and fights. MacDougal Street between W.Houston and W.4th Sts. has Cafe Dante, Wha?, and Reggio, Minetta Tavern, plus Ben's Pizzeria, all around before 1970. Walk down Bleecker past LaGuardia then make a right on Mercer Street and there's Mercer Street Books & Records, Gonzalez Y Gonzalez, and Angelika Theater. 'Want great pizza besides Ben's? You got John's Pizzeria, Arturo's, and other places.

Drop your provincialism and actually cross Broadway and comb the Village west of it between Houston and 14th Streets so you'll see how lame the EV is compared to the West Village/Greenwich Village on so many levels. Then you'll have a clue.

The East Village is a dismal grid now. Its crown jewel St.Mark's Place is a shadow of its former self.

Oh no! This has become Jets Versus Sharks.

@Anon 1:25 I completely agree. I see my neighbors empty out the trash in their car right on the sidewalk. Or throw their cans and bottles in the tree beds. There's a fucking trash can 20 feet away. Slobs!