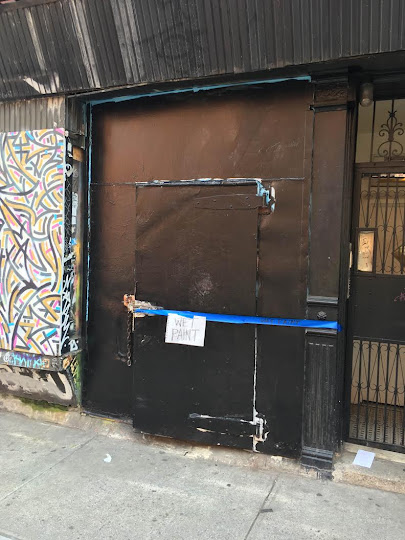 As previously reported, someone destroyed the MCA tribute mural on East Seventh Street near First Avenue on Saturday night.

@cramcept, who created the previous two MCA murals, painted over this yesterday. He says that he will eventually create something new featuring MCA here.

The mural arrived last May 4, on the third anniversary of Adam Yauch's death. Yauch, aka MCA of the Beastie Boys, died of cancer on May 4 2012.

Previously on EV Grieve:
There's a new MCA in town

Someone vandalized the MCA mural on 7th Street
Posted by Grieve at 4:58 PM

A wise move and a good statement to the asshole(s) that fucked with it.

An unwise move and a bad statement to the asshole (singular because someone took a pic of one guy) who fucked with it. Blacking out the mural told that asshole "you won" and if he fucks with a new one, the new one will be blacked out, too.

The mural creator should've used the paints he did the mural with to block out the defacement. Advice to him/her: When you create a new one put a graffiti and scratch proof plastic sheet over the mural. If it's too expensive to pay out of pocket, create a Go Fund Me for it which would pay for it in no time flat.

That guy did so much damage to it that it's probably easier to paint a new one than restore the old one.

Covering the "asshole's" markings with black paint is the best "fuck you" I can think of. When an artist puts a painting on a wall in EV he or she can expect it to not to be a permanent contribution. We will hopefully get another painting soon enough.

Yeah get rid of the mural, a real "fuck you" pssshhhh. That scrawler is laughing his ass off. He won. And now you've invited him and/or whoever else to fuck up the new one by blacking out the old one. Also most people don't read EV thus most people will think the black out is because the mural was fucked up to the point of no return (which it wasn't) and the building owner thought it looked like shit.

Just use the same paints and touch over the scrawl. I think that would take less time than a new mural. That plus a graffiti and scratch proof plastic sheet paid for by Beastie Boys fans via Go Fund Me would be the ultimate "fuck you" to the scrawler. We'll agree to disagree.

Where do these scratch proof plastic sheets come from? I need one.

Trixie I've seen them online. You install the sheet over the mural. They're anti-flammable, too. Again expensive but worth it.