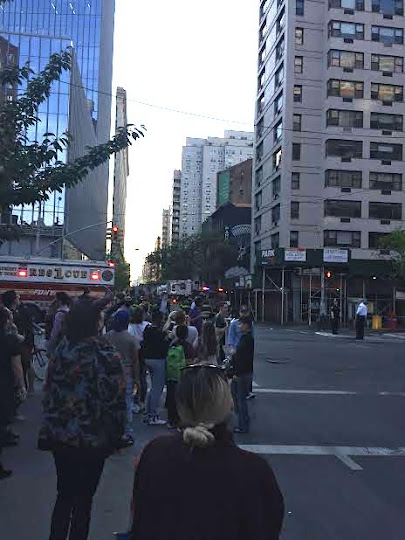 In case you wandered what all the helicopters were doing circling...

According to NBC 4, someone noticed a 10-by-10 foot section of the facade starting to separate from the building on the 15th floor at the St. Mark, 115 E. Ninth St. at Third Avenue.

Yikes... you can see where the problem is...here between East Ninth Street and East 10th Street... 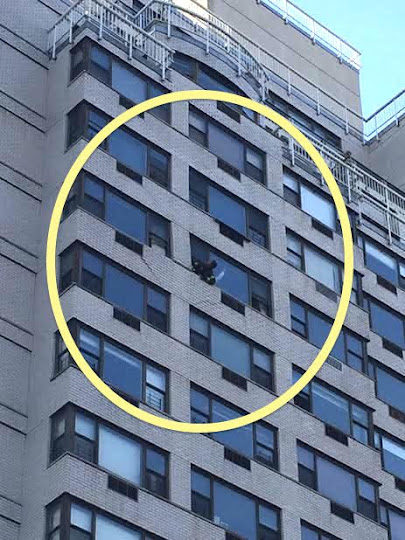 There are at least six firetrucks on the scene... and several small rescue vehicles. There isn't any word of injuries. And there are conflicting reports if any bricks actually fell to the sidewalk bridge below... 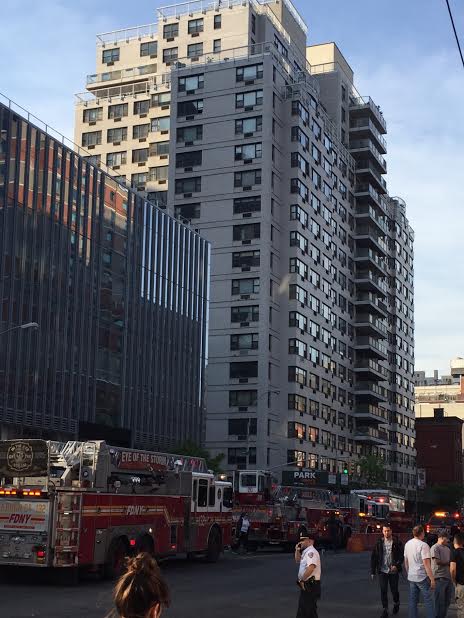 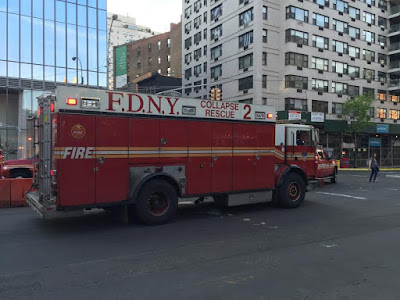 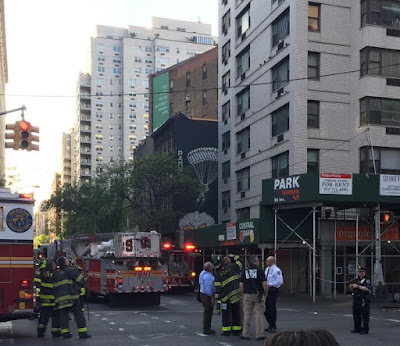 Thanks to Steven for the photos...

Crews are on the scene shoring up the facade this evening... 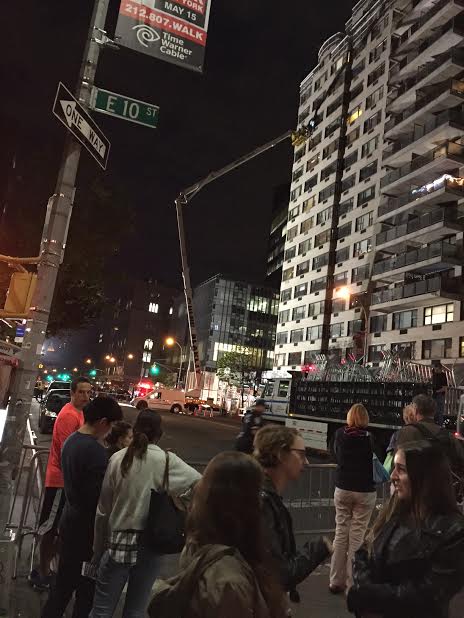 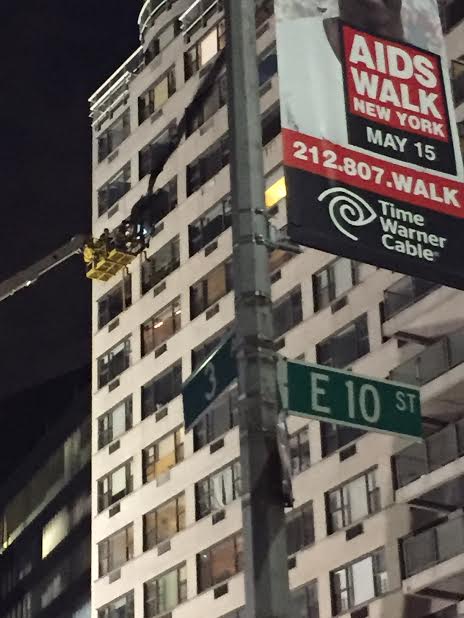 A resident of the building shared this "this poem/rant/list of questions" that someone put in the elevator tonight. "Tenants are pissed too," the resident told us. 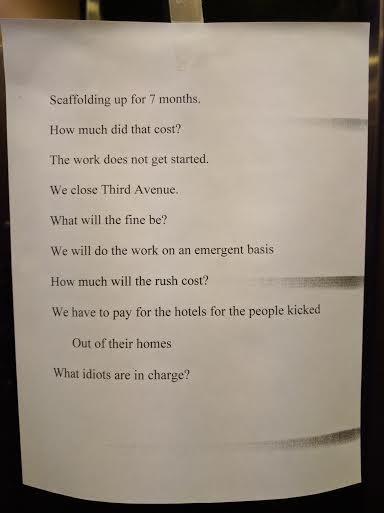 Here's part of an updated report from CBS 2:

Initially, there were reports that bricks fell from the building, but the FDNY later said that was not the case.

There was no immediate threat to public because there was already a sidewalk shed in place, the FDNY said. Only three apartments were evacuated.

Late Wednesday, Third Avenue remained closed between 9th and 10th streets. It was not known when the street would reopen. 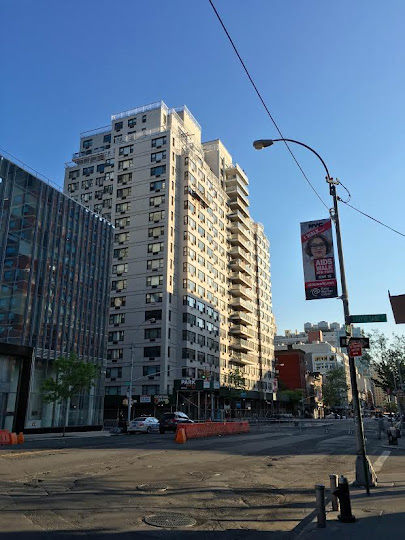 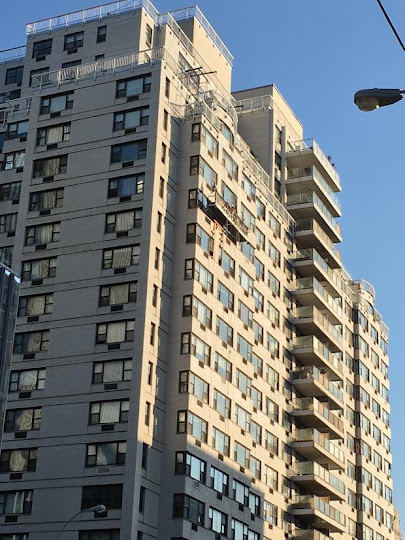 Firefighters have built a temporary wooden brace to keep bricks from falling from the 14th through 16th floors. The New York City Fire Department will remain on the scene with one engine until the facade is inspected by the engineer.

A boom truck is being used for more permanent repairs.

The building has 17 open Buildings Department violations, including one for facade safety. There is also an ongoing violation for failure to certify correction of a prior violation, which will require payment of a penalty to DOB.

On the ground level, workers have been tearing down the walls and gutting the former P&P Convenience Store, East Village Cheese (now on Seventh Street!) and Excel Art and Framing Store (now on the other side of Third Avenue!)... to help expand the Duane Reade on the East 10th Street corner.

The streets around the building remain closed... 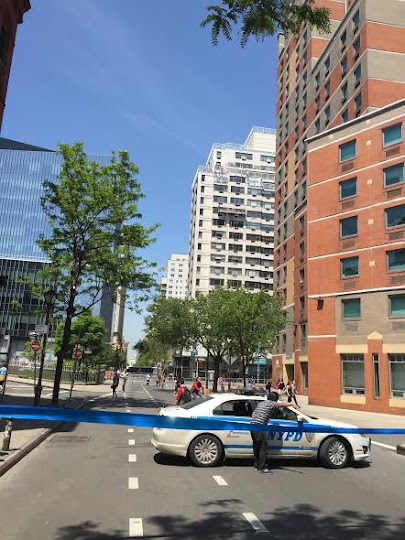 ... and from the look of the photo via Steven... it appears just one worker is on the job now. Perhaps there are others inside... 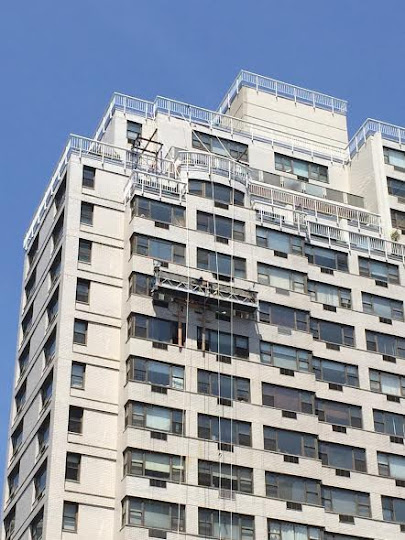 OK, there are several workers in the hanging scaffolding... as these photos via EVG reader Robert F. show... 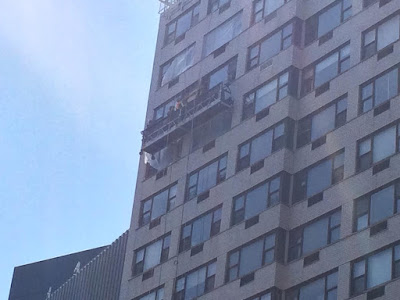 ...and the scene around the zone... Most of the storefronts between Ninth Street and 10th Street are vacant... 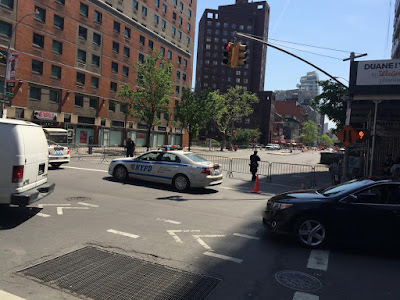 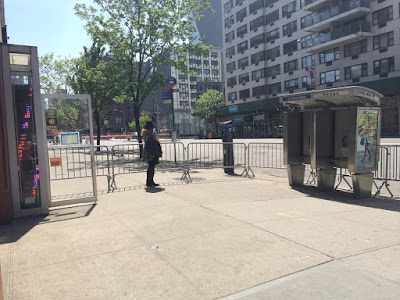 interesting as that building has been doing facade work for years, the gravedigger of such popular haunts as Pauls, East Village Cheese and Atlas Barbers... now expanding the Duane Reade even further, because you can never have enough DuaneReade/CVS/walgreens in a two square block area.

That's the same building that forced EV Cheese to move. I hope it crumbles to the ground.

Anon 7:33, I live in this building. The board and tenants had nothing to do with EV Cheese moving. I was a regular customer there and miss it being so close by. Please don't curse our building, plenty of hard-working people live here. The management company is a different story.

Anon 7:33, I live in this building. The board and tenants had nothing to do with EV Cheese moving. I was a regular customer there and miss it being so close by. Please don't curse our building, plenty of hard-working people live here. The management company is a different story.

One of the building's tenants told DNAInfo that he reported the cracking facade a year ago, and there are other crackes now appearing on the facade, so maybe they did EV Cheese a big favor by forcing them to move out.

That building has been scaffolded at least 3 times in the last 15 years. How badly built is that building. And how bad are the repairs? Luck no one was hurt.

Another resident. Huge disconnect between tenants, board, and management. People inside are just as pissed off as everyone else.

Charles H GREENTHAL manages this co-op building and they should be ashamed of themselves. firefighters have been here for over 6 hours tonight trying to fix a significant and dangerous problem that GREENTHAL has been aware of for months.

CHARLES H GREENTHAL MANAGEMENT NEEDS TO BE FINED FOR THIS.

you can never have enough DuaneReade/CVS/walgreens in a two square block area.

I was walking on 1st avenue this evening and noticed that in the space where McKays Drugs used to be on 1st between 15th and 16th, there's now a CVS next door to a Duane Reade! O death, where is thy sting?

It's interesting to read what actual residents in the building are saying re: management company, etc.

I have gone to open houses a couple of times in that building, and also knew someone who'd lived there for several decades before moving out. My impression was always that the building "looked good" superficially, but that whoever was handling financials and structural stuff (board and/or management firm) was not very good at it.

Get rid of East Village Cheese and this is what happens

:-) The Cheese is what held the building together. :-)

Part of the problem is that to comply with Local Law 11 is that you need the DOB to issue permits. The scaffolding has been up for nearly 18 months and although the facade inspection is required, the work has not been permitted. DOB is probably as much at fault as the management for this problem.

@10;06AM The problem is they used Swiss Cheese to hold it together, and now the building is full of holes!

I moved into this building 3 years ago and have found it to be well maintained and run with a very professional staff. The building was aware of this problem and was addressing it. (Like countless other buildings currently dealing with the same problem.) Notice the scaffolding already in place. Let's not turn a molehill into a mountain here. Most likely an unusual winter (cold one week, warm the next) accelerated the facade problem. No one was injured and it's being repaired at this moment. No news story here except the traffic disruption.

Today I was on the M8 bus going east, and at Third avenue it had to detour down to 4th street; I forgot the thing with this building was still going on.

(For years I've wanted a 4th street bus! Wouldn't that be awesome?)

The traffic jams this is causing on 2nd Ave and the side streets is unreal.

All the police, fire dept, emergency construction crews, crane will not come cheap. I am waiting to see what the assessment will be.

A River Runs Through It said...

There's an old stream that runs right underneath that building. I wonder if it's sinking into the ground?