The Drag March is tonight 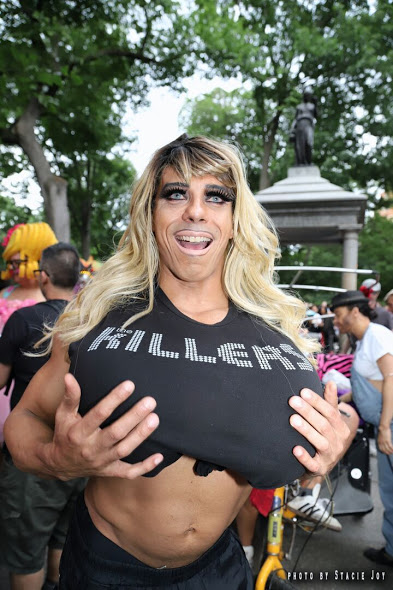 The 25th annual Drag March is tonight ... starting in Tompkins Square Park, where hundreds of participants will being gathering at 7 before making their way over to Sheridan Square and then the Stonewall Inn.

The Drag March got its start during the Stonewall 25th anniversary celebrations in 1994.

Brian Griffin, aka Harmonie Moore Must Die, was a member of the AIDS advocacy group ACT UP and Women’s Health Action and Mobilization (WHAM) in the mid-1990s, an activist who saw the power of drag to confront intolerance and practice civil disobedience in a way that also celebrated queerness. But at planning meetings for the Stonewall 25th anniversary celebrations, Griffin told HuffPost, the committee made it clear that it was only interested in presenting a somewhat sanitized version of LGBTQ activism.

“The committee for Stonewall 25 had actually asked — and it still seems quite unbelievable — that they didn’t want anyone to show up in leather or drag. It still, 25 years later, blows my mind,” Griffin said. “They wanted to normalize the image of gay America for a mass audience. They wanted to present a palatable image of gay men and women, men and women who were normal.”

This year, of course, marks the 50th anniversary of the Stonewall uprising.

You can revisit photos from last year here.
Posted by Grieve at 5:30 AM

For all you kids out there it wasn't the "normal gays and lesbians" that got things rolling back then and there still hasn't been an honest portrayal of these warriors shown to the mass public yet.

One of my favorite events of the year. Every day should be Drag Day.

A drag queen walks into a bar, and says to the bartender, “I want to eat, drink, and be Mary.”

I still miss Lucky Cheng’s, and there was a club on the west side, maybe on 11th Avenue in the 40’s, that had the best drag shows.

Noble is right, there were many in the transgender community that rose up and fought back during the Stonewall days, probably because they had no choice since they were always the group most targeted by the police and abused by men in general.

Giovanni, was the club called Edelweiss?

@12:41. Yes, it was called Club Edelweiss, 11th Avenue and 44th st., From what I recall, the cops dressed up in drag to go undercover and were constantly arresting people and shutting down the club, but I think the cops actually enjoyed hanging out at the bar dressed in women’s clothing as much as the regular patrons did.

Club Edelweiss was the best!