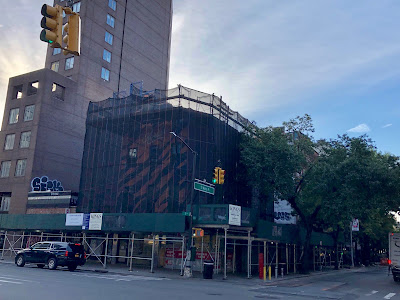 Updated 6/19: The LPC "reluctantly" approved the plan, per Curbed.

The Landmarks Preservation Commission (LPC) will review — and possibly vote on — a revised application today to allow an air rights transfer from 4 St. Mark’s Place across the street to a planned new office building on the northeast corner of St. Mark’s Place and Third Avenue.

In April, the LPC asked REEC reps to alter their proposal to incorporate the commission’s recommendation that they lower the structure’s first setback to better align with the St. Mark’s Place street wall, among other items, as Curbed reported at the time.

And here are some updated renderings from the latest application (PDF here) ... 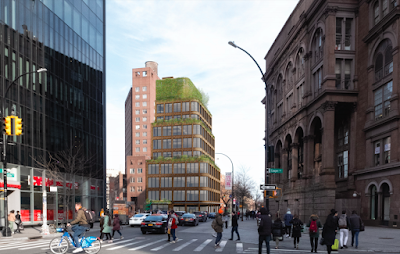 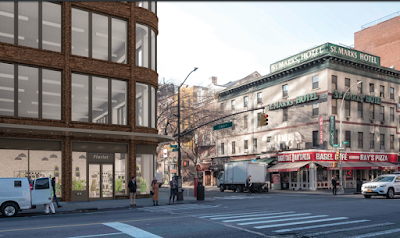 The proposed air rights transfer must be approved by the Landmarks Preservation Commission, the City Planning Commission and ultimately City Council.

The Village Preservation, who have lobbied against the transfer, noted the following about the approval process in an email on Friday: "As the [LPC and City Planning Commission] are controlled by appointees of the Mayor, we expect them to likely approve the plan. Which means the final decision will likely come down to the Council, which will defer to local Councilmember Carlina Rivera for their decision."

During the April LPC meeting, Jeremy Unger, Rivera's spokesperson, voiced skepticism of the precedent the project could set for the East Village and other neighborhoods, according to Curbed.

Community Board 3, State Sen. Brad Hoylman and Assemblywoman Deborah Glick have all spoken out against the bulk waiver.

Regardless of the outcome, REEC will still be able to build a slightly less bulky mixed-use office building with ground-floor retail.

Final demolition phase for 1 St. Mark's Place; more questions about lobbyists attached to project
Posted by Grieve at 4:25 AM

Why waste everyone's time with meetings for opposition to voice their opinions. Our esteemed Mayor has his hand in this from day one, he is probably one of the owners/or one of his family members are of the LLC that brought this property. This will get passed. People need to start realizing these politicians are out for themselves and not the neighborhoods we live in.
As for Carlina Rivera "District 2 City Council member Carlina Rivera, who holds the crucial vote for the zoning changes to make the project a go, has said that she'd sign off on the tech hub only if the city agreed to downzone the surrounding area. (She threatened a no vote during a Council subcommittee hearing last month, as the Lo-Down reported.)However, yesterday, Rivera voted for the rezoning without any protections." She was going to vote NO on the Tech Hub and look what she did there.
They are making fools of people. Speak your mind, but we don't care, we have the power and our plans will move forward no matter what committee you take it to. We own them and whether you want to believe it or not we own you!
What a shame........

Ok Carolina will you vote in favor of the developers again this time? There are no "children" benefitting from this office tower in our neighborhood this time, what will be your excuse?

Not to mention Capalino is the lobbyist, as he was on the Tech Hub and Rivington House and Two Bridges, so who does he tell what to do, the Mayor or the Council Member?

ReZone Rivera will become AirRights Rivera after the vote. She has betrayed her community before and will continue to do so with impunity. ONE PARTY RULE. ONE PARTY RULE.

Man, I wish they could incorporate that gorgeous old townhouse with the sloped roof. It's crazy that this city allows all this history to be torn down constantly. I wish they cared more like Paris.

Yup, we all knew this would happen. Money talks and politicians/community board members/city commissions all listen....as does the Mayor. Nobody listens to the community and its residents. Typical NYC.....and I have lived here all my life, so I am not surprised. Dismayed yes, surprised no.