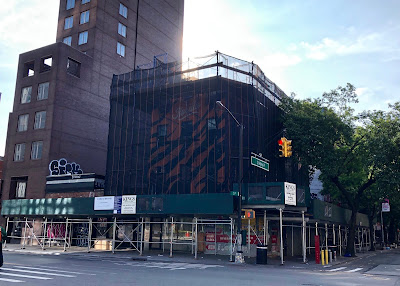 As previously reported, 3 St. Mark’s Place, 23 and 25-27 Third Avenue are coming down to make way for an office building with ground-floor retail. 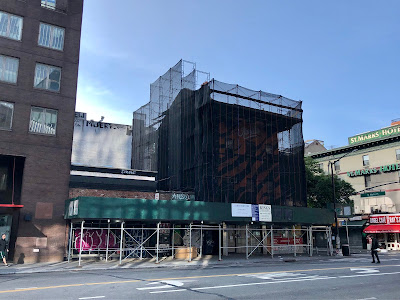 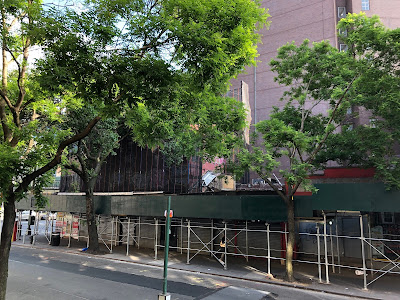 The size of this new building has yet to be determined. As previously reported, Real Estate Equities Corporation (REEC) wants to transfer the air rights from the landmarked Hamilton-Holly House at 4 St. Mark's Place to add more floors and square footage to their office building, a move that has its critics, including Community Board 3 and State Sen. Brad Hoylman and Assemblywoman Deborah Glick, who reportedly called on the Landmarks Preservation Commission to deny the bulk waiver.

REEC has already filed permits (last October) for an as-of-right five-story, 29,030-square-foot building on the corner. If the air rights deal is ultimately OK'd, then the Morris Adjimi-designed building at 3 St. Mark's Place could bulk up to 10 stories.

Yesterday, the Daily News looked at the lobbyists tied to the project — those who happen to have connections with Mayor de Blasio. (We explored this angle back in February.)

Andrew Berman, executive director of Village Preservation, told this to the News:

"The mayor’s prodigious fundraiser, lobbyist Jim Capalino, is seeking favors from City Hall for his clients to lift restrictions and facilitate inappropriate development in the East Village. The number of projects this lobbying firm has gotten approvals for in this neighborhood is mind-boggling.

"Each new favor builds upon the next,” he continued. "First he got permission for an upzoning south of Union Square for an oversized ‘tech hub.’ Now he’s seeking air rights transfers to continue the spread of ‘Silicon Alley’ to St. Mark’s Place. The mayor’s pay-to-play practices are utterly transforming this neighborhood."

"Projects like these require multiple levels of public review and hearings and consideration of the merits by numerous public officials and professionals. Perhaps [Berman] would be more successful arguing on these merits rather than spreading absurd rumors."

As far as next steps, here's Curbed after the previous LPC meeting in April:

REEC will return to LPC at a not-yet-scheduled public meeting once they have altered their proposal to incorporate the commission’s recommendation that they lower the structure’s first setback to better align with St. Mark’s street wall and other feedback.

The lobbyists behind the air-rights transfer and zoning variance for 3 St. Mark's Place
Posted by Grieve at 4:15 AM

Worthy to note CM Carlina Rivera submitted testimony at the LPC hearing for this disastrous project, but did not make clear if she was for or against this project. That said, brace yourself EV Carlina is going yo sell is out again! #2021

Now lets just imagine what would happen if any individual City Council member could single-handedly approve or block any project they chose to. Not only would that be a system rife with even more corruption than we have now. Much like it is in the case of Chicago Aldermen, but would inevitably lead to a chaotic system with some districts blocking construction and others allowing overbuilding. Our current system is clearly unfairly tilted towards developers, but the answer is not to give more power to local politicians, or to blame them when they don't even have the power to stop any project that’s unpopular.

Well, let's face it: the "fix" is in with De Blasio, so he won't lift a finger to help our neighborhood. (Even if he were in NYC, which he mostly isn't these days.)

I am so totally disgusted at what payoffs do to circumvent ANY consideration of neighborhoods, the people who live in those neighborhoods, and any semblance of contextuality.

Why doesn't De Blasio quit & just hand over his position to the developer who pays him the most $$$? Because, let's face it: that's just about what is going on, IMO.

Corrupt Mayor = Corrupt President. Just imagine what Blasio would sell if he was in the White House. Anyone want to buy the Washington Monument? It could be torn down and you can put up a taller one.

The Times had an interesting article on donations to de Blasio's campaign for president. (Suggested campaign slogan: If you can fake it in New York, you can fake it anywhere.) Of the 35 maximal donors who didn't hang up on the Times, only five said they think de Blasio should be president. Barry Diller doesn't endorse him, but gave because of de Blasio's support for "the island that we are building in the Hudson River." Frank Carone, a "local Democratic fixture," gave 5K while he was negotiating a real estate deal with the city. Nail Capri, a roofing and restoration company executive, also contributed 5K last year.

One starts to become cynical and suspicious, particularly since one donor (Harenda Singh) has testified to steering tens of thousands of dollars to de Blasio's campaigns to get better lease terms for one of his restaurants.

Since both the Tech Hub/rezoning and St Marks Place air rights issue are in Carlina Rivera's district her vote has a lot of weight and the majority of the City Council will follow her lead. However it becomes more and more apparent that contrary to her pre-election promises (the Jenny for the Hood story) she is part of the DeBlasio machine.