With a new menu, Little Tong dropping the Noodle Shop on 1st Avenue 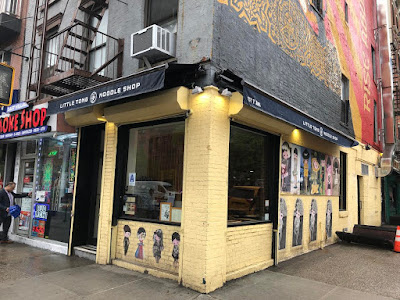 After a little more than two years on First Avenue at 11th Street, the well-regarded Little Tong Noodle Shop is undergoing a concept shift highlighted by a new menu and name, now officially going as Little Tong.

For the past two years, chef-owner Simone Tong specialized in mixian — a long, round rice noodle from China's Yunnan province.

With the new menu (as of May 9) and concept, Chef Tong hopes to bring together traditional flavors with modern techniques and local ingredients to create dishes that continue to usher in the new era of regional Chinese cuisine in New York City ...

The new menu [has] a greater emphasis on shared plates and composed dishes showcasing market ingredients. Highlights from the first iteration of the menu include:

As part of this evolution, the restaurant will drop "Noodle Shop" from its name (the Midtown East outpost, which opened last summer, will remain known as Little Tong Noodle Shop), but a handful of fan-favorite mixian dishes – including the Grandma Chicken and Chef’s Beef Shank versions – will remain on the menu.

Previously on EVG:
Little Tong Noodle Shop taking the former Schnitz space on 1st Avenue
Posted by Grieve at 4:01 AM

Little Tong is a great addition to the neighborhood, and this new menu looks great! I'm excited to try it out, but I'll have a really hard time not ordering Grandma Chicken Mixian...

Never thought much of their original menu, this one looks even less interesting. (Yunnan salsa verde?!?) Still prefer Chinatown, thanks.

Who are all of these people eating noodles? (you gotta say it in the Seinfeld voice)

Little Tong is one of our favorites. Always good quality food.