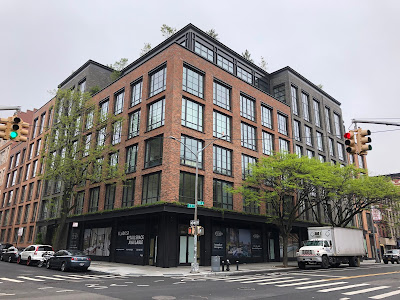 With the news yesterday that Trader Joe's is officially coming to 432 E. 14th St. at Avenue A, several readers asked about the status of that large retail space in the base of Steiner East Village on Avenue A between 11th Street and 12th Street... 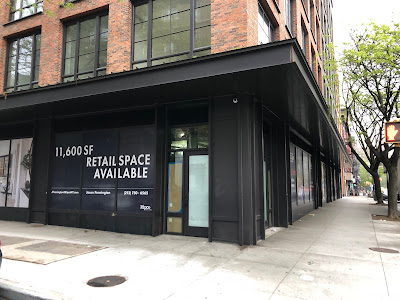 There's still an active listing for the 11,000-plus square feet of space... 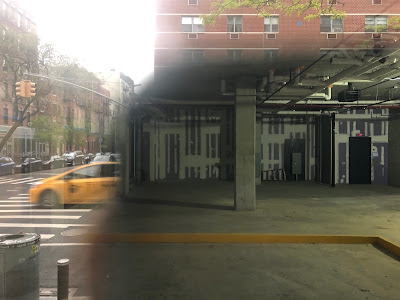 The for-rent signs have been up outside the luxury condoplex — on the site of the former Mary Help of Christians church and school — since February 2018.

The idyllic rendering at the Steiner East Village website shows what looks like a restaurant/wine bar in the corner space on 11th Street along with some smaller shops. 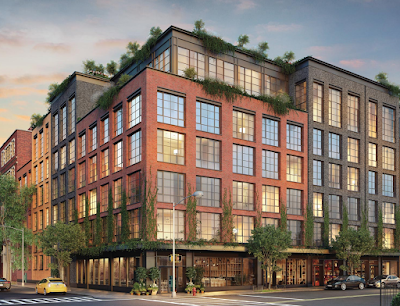 We recently heard a Whole Foods rumor via an EVG reader, though there's currently not any evidence to support that claim.
Posted by Grieve at 4:00 AM

I live very close by and of course hope whatever opens here (prefer several smaller shops than one mega one) has something that serves the neighbored and is not a tourist destination. One more thing I doubt any business other than a chain would attempt to rent here sadly.

It's probably the best designed residential building in the EV. But the commercial rent is probably soooo high that only chains can pay. But there's so little walking traffic. A small bank would be a solution. We've been redlined by the banking community with so many closings in the last few years. People/business need banks. Also Whole Foods/Amazon has been talking about smaller stores... so maybe that's a possibility.

Whole Foods would be nice. I would barely ever have to go west of 1st ave.

We can use a good size pet shop or pet store? in the neighborhood.
All animals.

Yes! Would love that! I haven’t seen families eating out in our neighborhood since benny’s & 3 of cups closed

Just imagine what Ray can do with this space, if you consider how much he offers in his little store.

I think Steiner should beg Ray to take it over.

I agree with anon 11:52. Citarella would be divine. Perhaps out of the price range of some but those people can shop at the nearby Trader Joes. Something for everyone. All the fish stores have long disappeared. It's pretty hard to maintain a reasonably priced food store with the rents that are charged without massive volume and lines like Trader Joes.

Who can actually afford these spaces? It would have to be very high end retail. I shutter to think how much it will cost. SInce the prices to live in this building are enormous, I only forsee a well known chain moving in. Just no more fucking banks or Duane Reades or Wallgreens.

Would love a cute vegan spot! Or maybe Westville could expand next door!