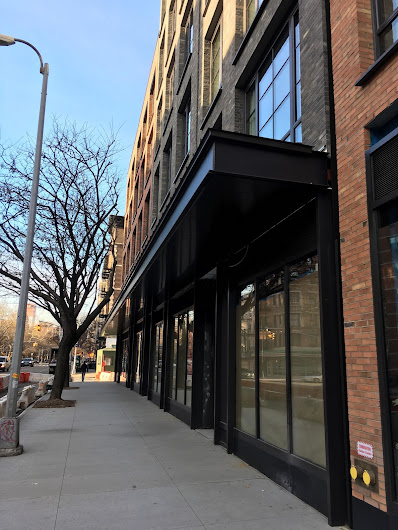 Now that residents have been moving into the condoplex along Avenue A between 11th Street and 12th Street, perhaps there will be some activity with the ample retail space here.

Several for rent signs appeared on the front windows at Steiner East Village this past week... 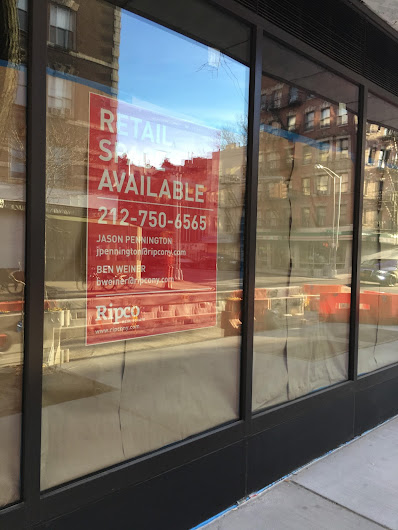 The listing at RIPCO appears to be the same one we spotted from 2014. There's not much info, such as the asking rent. The spaces are divisible. Maybe this whole space will attract one big retailer, such as a Trader Joe's, or it will be chopped up into four storefronts. The total space available is 11,611 feet square feet.

The listing also notes some curious neighbors to Steiner East Village ... several of which are no longer in business:

La Lucha closed in 2015 ... BAR-BO-NE (or Barbone) closed in 2016... and the Rite Aid on 14th Street between Avenue A and Avenue B was demolished four years ago. Unless they mean the one on First Avenue at Fifth Street.

Previously on EV Grieve:
Some Steiner East Village retail speculation
Posted by Grieve at 4:02 AM

Yaaa, MORE TRADER JOE's and CVS's..You can never have enough

Oh they left out Empire Biscuit, Caio for Now, 5 Tacos..... That listing looks more like a warning to any business than a come join the party.

Happy to be snubbed.

Finger's crossed the vanity of the building owner (who named the building after himself) will want something "cool" over a big brand.

I met Steiner's ex-wife last year, she told me he was very proud of this building. It is attractive, good materials especially compared to those ugly buildings most developers have stuck us with recently, yes I'm talking about you Ben Shaoul and your shamefully ugly 31-33 Second Ave.

Yes I know I prefer the parking lot, church, school and rectory but nothing will bring those back now. Put your anger, frustration and comments towards the fight for preservation of what is remaining of our history and cultural past, there's a lot to do.

Lots of transitioning and flux going on in NYC. I love to see small businesses thrive.

Between this and the Extell building on the corner of 14th and A, there's a lot of retail space opening up. I wonder if any of our neighborhood activist / preservation orgs are lobbying these owners to seriously evaluate renting to local small businesses?

There is a way to make options OTHER THAN CHAINS attractive to landlords.

Too bad the affordable housing planned for this land never materialized.