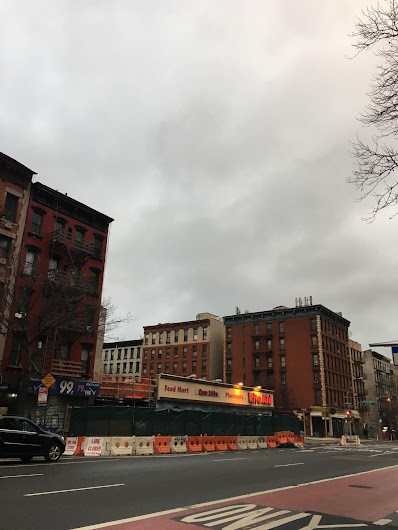 The first level of the incoming condoplex at 75 First Ave. recently made it above the plywood here between Fourth Street and Fifth Street... However, the site remains locked up... the city served up a full stop work order back on Jan. 12.

The DOB complaint notes "no protection for pedestrians" (not all that safe for cyclists either as the construction site and trucks take up the bike lane) ... 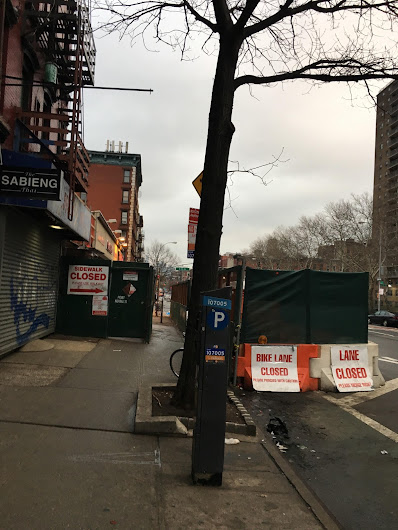 DOB records show that there's an outstanding $10,000 penalty due as well for "failure to designate and/or have a construction superintendent present as required."

Sales commenced last August for the 8-floor, 22-unit condoplex. The four units on the market are asking between $1.79 million and $2.25 million. 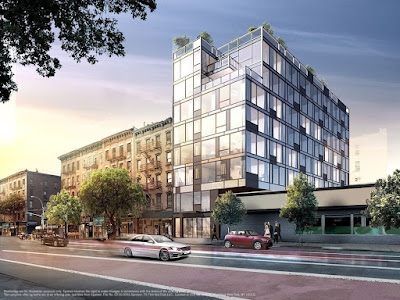 Things seem to be progressing pretty slowly here. We noted the foundation work here dating back to October 2016. And it's not a very large site.

Sales underway for Rite Aid-adjacent condoplex on 1st Avenue
Posted by Grieve at 4:10 AM

Shady AF there when they first were digging super deep right next to the apartment building only at night with their equipment. A danger waiting to happen especially with that dumb levitating design.

How long has this garbage been blocking the sidewalk and bike lane? It's dangerous to walk along there after dark and it's dangerous for cyclists at all times. They should be required to remove all that blockage if there is no construction going on.

I live across the street. Yes, there has been major work going on off-hours, weekends. Really loud digging during the night. And a shoddy protection zone set up in front.

Good riddance is this thing is stalled indefinitely.

When the warehouse-type building that had been there was demolished around 2007-ish, it was done so poorly the building directly to the south almost collapsed and there may have been other infrastructure issues at play as well. In any case there was a stop work order on construction there for a long time after that.

No doubt recent construction was taking place at night because there are still some very problematical structural issues going on on that site.