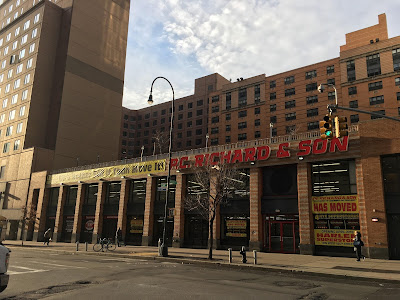 Community Board 3 is expected to make its final vote tomorrow (Tuesday!) night regarding the Mayor's plans for a tech hub.

The mayor's 20-floor project requires several zoning changes, and faces many hurdles before getting the final OK. After the full CB3 board, the Manhattan borough president and the City Planning Commission will weigh in before the issue comes before City Council for a vote later this year.

Back on Friday, amNew York explored the ramifications of the proposal in an article headlined Village residents worry proposed Tech Hub could speed neighborhood’s transformation into ‘midtown south’

P.C. Richard puts up the moving signs on 14th Street; more Tech Hub debate to come
Posted by Grieve at 11:30 AM