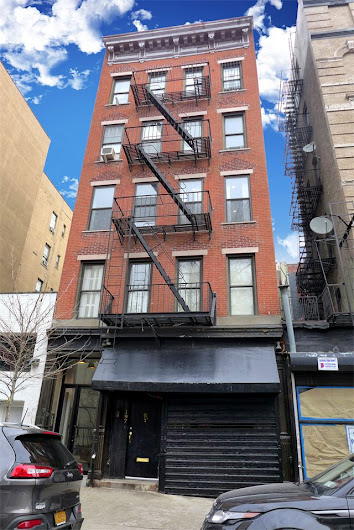 The building on Third Street between Avenue A and Avenue B is back on the market. It went up for sale in March 2016 with a $7.5 million price tag.

According to public records, an LLC with a Midtown address bought the property for $6.3 million in a sale recorded in August 2016.

Here's more on the latest via the Massey & Knakal listing:

197 East 3rd Street consists of an occupied retail unit on the ground floor along with the majority of basement and 16 apartments above. All of the residential units are rent stabilized due to enrollment in the J-51 Tax Abatement program; however, 8 apartments are renting at market with high legal rents that permit preferential rents at market. The buyer can add value in a variety of ways including roof deck installation, retail expansion and future upside in the remaining 8 unrenovated apartments (half the building).

In addition to the 8 renovated apartments, the building underwent an extensive renovation which included lobby and common area renovations, a video intercom with Kerisys security key fob installation, façade upgrades, new electrical system throughout (800 amps with new conduit/cables and 80 amp electric panels in each residential unit), completely new lighting in the common areas and much more.

Due to all the work that was performed throughout the building, current ownership is in the process of applying for rent increases due to Major Capital Improvements which should go into effect mid-2018. These increases will result in approximately $10,000 in additional annual net income.

The retail tenant is No Malice Palace, which eventually returned after the death of owner Phil Sherman. This past Christmas it temporarily served as Donner and Blitzen's Reindeer Lounge.
Posted by Grieve at 4:10 AM