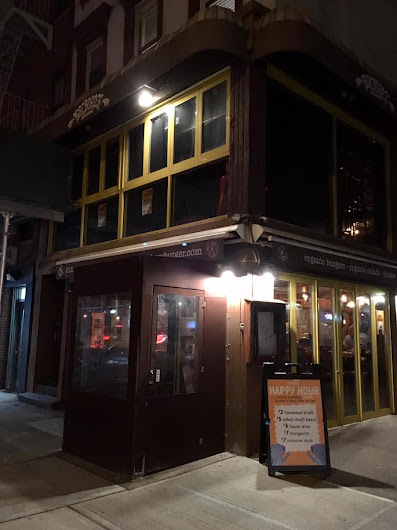 Bareburger is on this month's CB3-SLA docket for a new beer-wine license for 173 Orchard St. between East Houston and Stanton. (Their questionnaire is online here.)

While Bareburger, which sells a variety of organic and all-natural burgers, is expanding with multiple locations in NYC and overseas, the East Village site on Second Avenue at Fifth Street will be closing in the weeks ahead.

Matt Kouskalis, who owns and operates a handful of the city's Bareburger outposts, confirmed the East Village closure. He said escalating rents at the location were behind the reason for the move.

"So we are moving to a slightly smaller and cozier spot on the Lower East Side," he said via email. "We are sad to leave the East Village but our new location is only a few blocks away and our delivery area will remain the same!"

He said he hoped to be open in late April on Orchard Street.

Bareburger debuted on Second Avenue in January 2012. The previous tenant in the two-level space was neighborhood scourge Sin Sin.

They apparently haven’t been opening the upstairs for months. I would guess a waning clientele as much or more than rising rent...

They more likely want to cash in on the discerning tastes of the drunk traffic below Houston, which is much worst, I hear, than the East Village proper. Little quality control down there; that clientele, as we get a little past midnight, would fail any taste test and would not be able to tell the difference between any type of burger and a plain old mop head.

WHen SinSin first opened, it was a very comfortable, casual and reasonably priced neighborhood bar, far from being a scourge. I formed many friendships there that I still cherish and maintain to this day. At some later point, the crowd changed and it did become somewhat of a neighborhood nuisance. If memory serves me right, after SInSin closed it became a Russian themed bar called "Samovar" for a while. But that place never caught on with the locals. When I first moved to this block, it was a Bodega that later became a Hippie type clothing store, selling primarily Afghan Sheepskin coats so popular at that time. I'll never forget the mustard colored Afghan coat with burnt orange and dark blue piping I bought there. It kept me warm for at least a dozen years. I've never been to Bareburger but walk by daily. It seems to be a rather quiet, casual place to have a meal. I wish them the best of luck at their new location. They've been good neighbors as far as I'm concerned.

Thirty years ago, the retail tenant in that space was a vintage clothing store named Kasbah. (The link points to a great list of long-gone downtown shops.)

When people complain that the old timers complain all hate time about the changes in the neighborhood I think back to the old stores. it was always so interesting to just walk anywhere within two blocks and you would find an interesting shop with unique goods and interesting people. Now I feel like I live in an expensive mall with people who all dress from the exact same store, have the exact same mindset and all the money.

So glad Walter recalls Sin Sin from the beginning - I always knew it as a pretty neighborhood, chill place to drink/talk. I knew the owner & he was a cool guy. Not sure if he had bowed out when it changed course.

If I recall. Sin Sin caused people on the block years of torture with no sleep, no friends coming over for many years. When Bad Burger came in it was beer and wine low key. Had a little problem with them trying to do comedy shows or something. For the next crew who tries to strike it rich there I will support the ba if they have to fight.