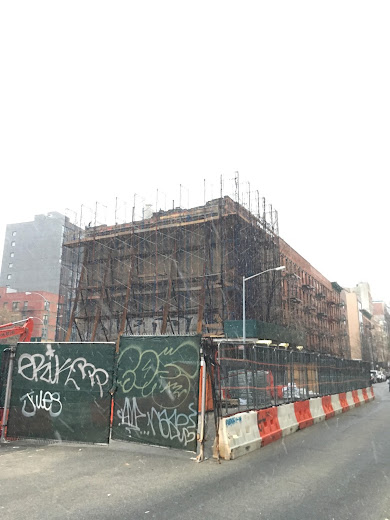 Last week I noted that the pile driving had started up again at the development site on Avenue C and Houston Street/Second Street where 10 floors of luxury rentals are slated.

There were multiple complaints filed with the city earlier last year about the construction possibly destabilizing the building next door — 249 E. Second St. There was a partial stop-work order issued in April 2017 when No. 249 reportedly shifted.

Anyway, since the last post, workers have erected a sidewalk bridge at No. 249 and enveloped the building in scaffolding ... 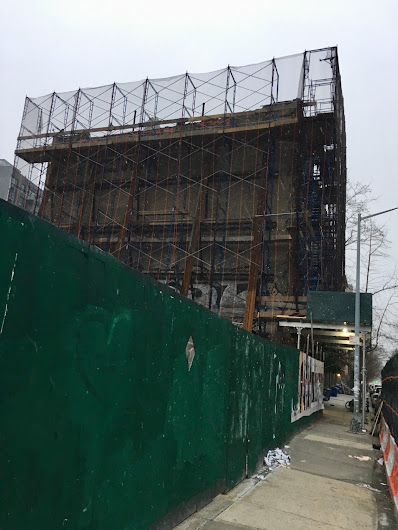 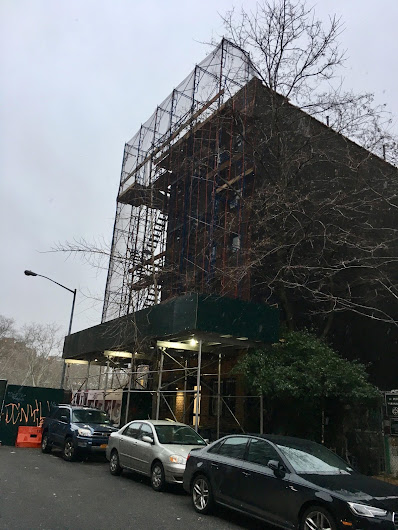 There's a new work permit for the address "for minor parapet repair work."

Meanwhile, a resident in the building shared this about the pile driving:

The developers of the building next door originally considered buying 249 E. 2nd Street in order to empty it of tenants but in the end decided it would take too long. They may regret that decision now. The current situation began almost a year ago when the city ruled on 3/21/2017, the construction in the adjacent lot damaged 249 E. 2nd Street. The city’s ECB Violation report ( DOB Violation Number 032117EX103JT04 and readily viewable online at the DOB site ) cited Noble Construction GR LLC of 1 Harmon Plaza, Secaucus, NY, for “FAILURE TO SAFEGUARD ALL PERSONS AND PROPERTY AFFECTED BY CONSTRUCTION OPERATIONS NOTED: THAT DURING DRILLING OPERATIONS AT CONSTRUCTION SITE CONTRACTOR CREATED DAMAGES TO THE ADJOINING FOUNDATION OF BUILDING 249.”

A violation categorized as “Aggravated Offense Level 2.” There was a partial stop work order. The construction company could not do any more work accept to perform abatements of the damage it had done to 249 E. 2nd Street. Evidence of the damage was plentiful in the numerous prominent cracks in interior hallway walls and around door jambs, the sure sign of the building having shifted.

When last week’s pile driving began it was so severe tenants in four surrounding buildings spontaneously gathered in the street to discuss a collective action to thwart the construction activity and set off a flood of complaints to the DOB through the city’s 311 complaint phone line. Which is what originally brought the inspection that resulted in the previous violation citation.

249 E. 2nd Street now has surveyor’s gauges permanently affixed to key parts of the exterior, and crack monitors on the interior hallway damage, to facility monitoring of the ongoing situation. Almost every day surveyors are taking readings to catch any further building damage. Where this will end is anyone’s guess. But there is absolutely no mistaking the danger to the tenancies of the current occupants of 249 E. 2nd Street.

The reader also shared photos of the crack monitors... 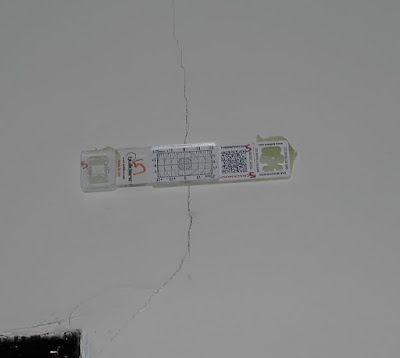 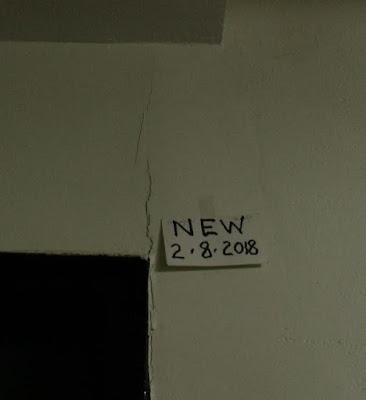 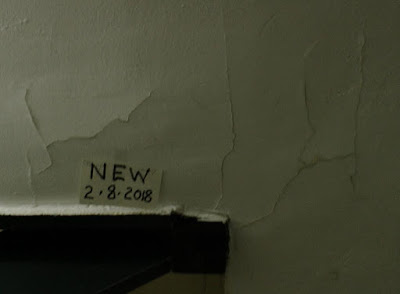 When complete, the all-new 11 Avenue C will have 4,600 square feet of ground-level retail, 45 residential apartments and a landscaped roof terrace.

Pile driving resumes at the site of the East Village's last gas station, where a 10-floor building will rise
Posted by Grieve at 4:30 AM

The thoughts of the developer: they'll eventually be able to buy it and quickly tear it down without any fight from the tenants. Once the foundation has been undermined, the city will be the bad guys and force the tenants out. It is a quicker process than had the developer just bought the building outright.

It's very possible these people will be displaced.

Does the owner of the 249 building not have any liability here? One would think they should be expected to maintain their building so it can stand on its own. Also it's not like the gas station provide any support to this building... Obviously sucks for the tenants either way but curious if they have recourse against their landlord...

My family owns a small circa 1840 building which I live in. A 5 story building will be demolished and replaced by a larger 6 story building. There is a small community garden in between however I am really nervous about how my building will fare when the pile drivers start. I know if will affect my building but what if it makes my building unsafe to live in? I love my home and do not want leave it due to the somewhat brutal building processes which developers employ. This could be a nightmare.

Fuck that glass bullshit. Has no place there. Halt construction permanently! You have no right to destroy other buildings as you build your out of place monstrosity.

pretty sure i heard the pile drivers back in action today. and i live 5 blocks up from the construction site. i can hear it, and sometimes feel the impact.

This new building was also supposed to designate a community room on the ground floor; it sounds like that's not happening either. Several of us wrote letters requesting that this community-facility requirement be observed.

If Scuba Diva or anyone else can provide details on the community space please contact me at rnh141@gmail.com.

I heard the pile drivers in the dog park yesterday. I didn't realize what it was until I walked down 2nd Street today and my soul literally shook.

Three of my high school years were spent listening to the endless pounding of pile drivers as my town built a new bridge right next to the school. The glass in the windows would bend in and out and the desks rattled for three friggin' years. I get flashbacks when I hear/feel that sound now, as I'm sure the rest of my high school class does, where ever they may be.

These developers came to CB3 when they were seeking approvals to disregard zoning rules so they could build bigger than allowed because after they bought the lot they discovered problems with the foundation that was going to cost them a lot more, so they wanted to build higher so they could make back the money. It was outrageous. I don’t know what wound up getting approved and if they got the release from the zoning laws. Someone should look into it. If they were allowed to build higher than zoning allowed and then harmed neighboring buildings there should be real outrage and punishment. Isn’t Houston St built over an underground river?