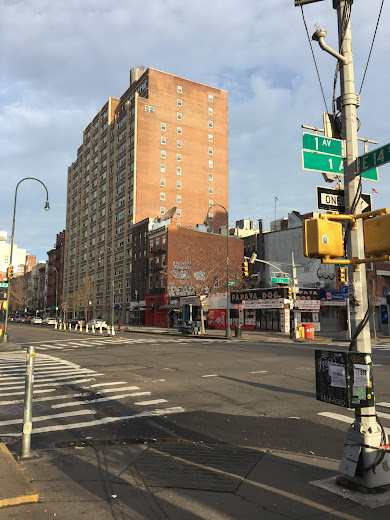 There has reportedly been an increase in the number of residential complaints about a variety of activities on 14th Street and First Avenue.

The intersection was a focal point of discussion during a recent 13th Precinct Community Council meeting. (The 13th Precinct has jurisdiction starting on the north side of 14th Street.)

Town & Village covered the meeting. From their report:

The intersection at East 14th Street and First Avenue has recently become a hub for the homeless as well as unsavory characters who’ve been loitering, making neighborhood residents feel unsafe, a number of neighbors have been saying.

“We wanted to heighten awareness about First and 14th because there’s been an increase in vagrants,” Hayduk said.

Residents have also voiced complaints to [City Council Member Keith] Powers’ office about aggressive panhandlers on the north side of East 14th Street across First Avenue from Stuyvesant Town and in front of the Papaya Dog and near the vendors at the corner.

There was a report of a stabbing outside Community Grocery & Candy on Jan. 11. Two men had reportedly gotten into an argument inside the store, and it turned violent out on the sidewalk.
Posted by Grieve at 4:20 AM

Two weeks ago I counted a 'Community' of 13 people lounging next to the Papaya King at around 7PM. As the weather grows warmer will we start to see 25-30 there and next to the Vitamin Shop on the south side of 14th?

I see this as all part of De Blasio's "nothing is really a crime" attitude. And as soon as the weather improves, we'll have a massive influx of crusties on top of all the homeless, the aggressive panhandlers, etc.

NYC quality-of-life: racing toward the bottom, except for the rich in their Ubers.

Those of us who run our own errands, take the subways & buses, and don't have doormen to "protect" us, hey, we're on our own. And too bad if you're a senior citizen: that just makes you easy pickings for these hustlers.

I did notice that, after who knows how many years of not having one, Church of the Immaculate Conception on 14th and 1st put up a large wrought-iron gate to close off their courtyard, and wondered if the increasing seediness of that intersection had something to do with it. Because even in NYC's "bad old days" of the late 70s/early 80s, 14th and 1st was pretty stable, and didn't attract the type of skells it does now.

I discuss this with my brother on a weekly basis. Why aren't there even attempts to "keep them moving"? 14th and 1st is a meeting spot and they stand around all day. I recently saw a "regular" aggressively go into Papaya Dog and start cursing at one of the workers. It's quite odd how 14th and 1st goes fully unchecked.

You can't keep "people" moving if the police drive around in cars.

Sucks, doesn't it, when you've put down a massive down payment or security deposit on a brand-new, glass-walled castle in the sky and only then do you find out there's a permanent underclass here that has long been a defining feature of the East Village. What?? Shaoul's or Steiner's agent neglected to mention that? I'm shocked...

In other news, Papaya Dog will now garnish your tube steak with a side of sauerkraut, chili, or gripping urban fear.

Everyone bewails the gentrification of the EV, but see some actual poor people and some of y'all are clutching the pearls the way they do uptown.

Standing around all day isn't a crime (though obviously some of them do commit other crimes). You don't like seeing them on the streets, give them better places to go.

Another problem on these corners is the high school student marauders who regularly fight, scream and stampede after school lets out, and there is usually zero police presence until someone gets hurt. For years I have seen groups gathering here and targeting specific kids for bullying and to settle scores with after school fights. Most of the beatdowns seem to happen between Papaya Dog and CVS. It’s a crowded sidewalk area with the fruit stand, which makes it easy to trap their prey. Sometimes EMS has to come and remove the injured. At least the homelss people get a ringside seat for the fights.

That area has been sketchy for years, but I it has gotten worse in the last couple of years for some reason. I was also wondering if the church had to put up those big gates because of the people hanging out there and by the McDonald's and in the little store next to the McDonald's. The corner by Papaya Dog is also not so great now. There were always guys hanging out there, but they are more aggressive now, and I have gotten nervous walking that way a few times. I don't know what could be done, but maybe more of a police presence would help.

Slowly headed back to the stinkin dinkins years

A few more Link kiosks and $2,500 trash cans and the place will be fine.

But seriously, it would be nice for beat walkers to help move people along and get a better line of sight into what is going on and why. Thank the heavens for Taverna Kyclades, that foothold keeps the corner hanging on.

Church put up those gates because they were repeatedly vandalized by the petty criminals casing the neighborhood. In a couple events, they broke inside the sanctuary and busted up all the 'Stations of the Cross' statuary and pillaged the altar area- once even ripping stuff off the walls. Cost 1000s of $.
Once the Ave A entrance opens? This seediness will spread all along the block. While the luxury condos rise? Small businesses are failing weekly and many are for rent. Where are these new rich tenants shopping and buying? Lanza, Angelica, Cia- most of the good places are gone and there is not even a decent diner that can afford to open up. The nice Irish pub gone now as well. Do these tenants not eat? There arent even many high end places to accomodate them. The whole scene is off - doesnt add up.