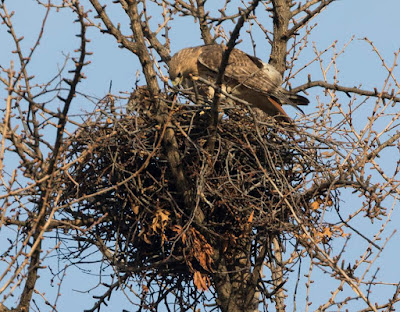 Early this morning, EVG reader Mark Cyr spotted Christo and Dora working on Dora's nest in Tompkins Square Park... in the top photo, Christo is giving a stick to Dora, who is deep in the nest, her head barely visible (to the left of his).

Per Mark, Christo set about bringing her sticks from various parts of the Park while she threaded the sticks together, building up the nest. "Dora seems to have a serious plan for this nest," Mark reported.

In the photo below, Christo is seen leaving the nest to find more sticks for Dora. She is mostly inside the nest, while working on new construction (there are permits on file for this)... 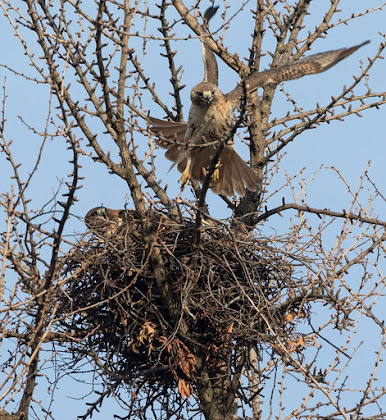 For now, this looks to put to rest any of the rumors circulating in the Park that Christo has abandoned Dora in favor of Not-Dora/Nora. (This still doesn't explain the Christo-Not-Dora/Nora quickie witnessed by many back on Monday, Dora's first day in the Park after her three-month wing rehab.)

As for Not-Dora/Nora, she was spotted hiding out on Avenue D. Mark said that she seems to like to perch on man-made structures, not trees.

"She is good at camouflage and kept turning her back to our cameras," Mark said. "We have not seen her in Tompkins Square Park since Monday, when Dora returned." 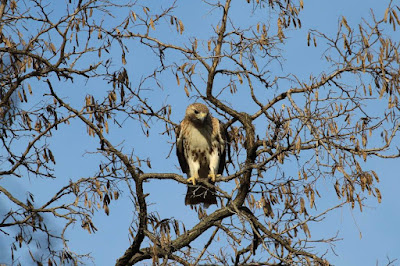 Quite a remarkable development I hope the couple have a few kids this spring / summer to celebrate.

"Why go out for hamburgers when I have steak at home?" - Christo

Sounds like Dora kicked Whora's ass or gave Christo a scolding by guilting him into building a bigger nest.

I’ll bet 10 bucks that they try to repair their relationship by having another baby.

@Giovanni - if you lose, you get egg on your face

@Dr Gecko. Eggselent. But since these are East Village birds, I’m sure an egg cream from Rays would do.