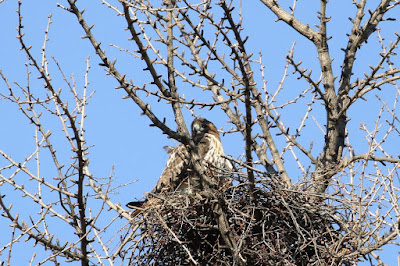 Steven shared the above photo this morning... where Dora, starting her second day back in Tompkins Square Park following a three-month wing rehab, was spotted sitting in the new nest ... the nest that her partner Christo has been building with (or without!) his new lady hawk crush friend Dora/Not Nora.

As of around 9:45 a.m., Christo was seen circling the nest several times with twigs in his mouth. Then! They were both in the nest at one point. They both opened their wings, but nothing happened, Steven reported. At this time, Dora/Not Nora had not been spotted. 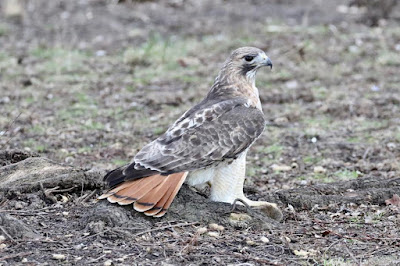 Later in the day, Christo caught a rat. He ate half of it and then called out for — presumably — one of the female hawks to finish the rest. Neither of the females showed up this afternoon. Dora spent a lot of time in the Park this morning and then disappeared.

The question now is, what happens next? Some may argue that Dora should not have been returned to the Park because Nora is settling in, but it was explained to me that this is really the best place for her. Dora is not a candidate for captivity — she is way too wild and needs to be free. Releasing her in Tompkins means she is in her familiar territory and it is the easiest place for her to find food. Ideally, Christo will bring her food, but if he doesn't, she shouldn't have too much trouble obtaining it herself.

The way I see it, Dora would not be alive if she was not picked up and taken to rehab, and this is her second chance. Things might not turn out the way we want them to ... We can only watch and learn.

I know of WINORR and their good work, so I appreciate that they rehabbed Dora.

BUT I also know that red-tailed hawks, when they "lose" their mate (as Christo had every reason to think had happened!), will choose a new mate in as little as 48 hours. So it's not clear to me if returning Dora to the park is going to mean the Christo & Dora get back together.

And if they don't get back together, I don't know where Dora goes, b/c hawks usually don't tolerate a "third-wheel" extra hawk hanging around for very long, unless the extra hawk is one of its own offspring still growing up.

Hoping this situation works out OK, but genuinely worried.

Do hawks practice polygamy? If not what about introducing a not-Christo and let the dice roll?

This has been the best, nail-biting, local drama I've seen in years. Better than Tinder, Instagram, or Facebook all combined.

@9:53am: No, red-tailed hawks absolutely do NOT practice polygamy, and that is very well-documented. They pair up, make a nest, reproduce, and defend their territory. They generally aggressively drive out any "outsider" hawk (including their own offspring when the offspring are old enough!).

In 2016, one male and two female red-tails shared a nest in Syracuse (scroll down for pic of 6 babies in the nest) -

If I've learned anything in the last several years studying these hawks, it's that you really can't ever know what they're going to do. We can only watch and learn.