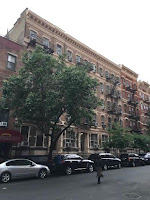 As he writes, even properties within historic districts are at risk of redevelopement ... and "the Landmarks Preservation Commission, the last line of defense for protecting historic New York, is rolling over rather than pushing back."

Two key players are responsible for LPC contradicting its own mandate: Chairwoman Meenakshi Srinivasan — who openly questions the LPC’s right to tell architects what to do — and Mayor de Blasio, who is promoting redevelopment at the cost of the city’s architectural heritage.

A recent study commissioned by the New York Landmarks Conservancy showed the Landmarks Commission in a typical year approved more than 99.5% of all applications in historic districts.

De Blasio named Srinivasan chair of the LPC in 2014 after her stint as chair and commissioner of the Board of Standards and Appeals, "an agency known for granting zoning variances to expand development rights."

In the East Village, Uhlfelder notes how "the LPC ignored requests by preservationists to landmark a group of Beaux-Arts apartment buildings, permitting development of a new graceless hotel." This would be the incoming Moxy hotel on 11th Street between Third Avenue and Fourth Avenue.

Insider chicanery and cronyism blatantly displayed by de Faustio, moving this gentrification flunky around the offices responsible for these odious rezonings. The mayor has clearly corrupted this office and NYCHA with these pro-corporate profiteers and agents for speculative real estate.

If anyone's aware of it. The Moxy opened up in the Fashion District on 36st and 7th ave back in December and it seems to be deserted most of time. Hopefully this retarded business model of luxury flophouse lodging will bomb with the speculative consumers that the city prefers to cater to.

This is really about 1 party rule. Dem pols are immune to the needs of the voters because they know they will win no matter what. They have money and a machine that will steamroll anybody who gets in their way. So it's no surprise we gets buffoons like Mayor Bill and his city council... bought and paid for by anybody with a lot of money and a selfish cause.