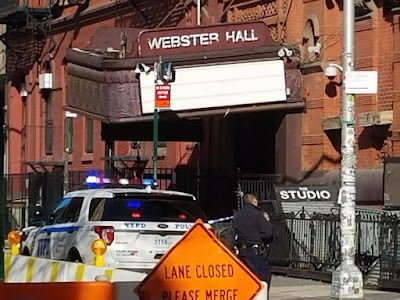 The NYPD and FDNY are currently on the scene here on 11th Street between Third Avenue and Fourth Avenue... as you can see in the photo, part of the Webster Hall marquee has pulled away from the landmarked building. The street is blocked off for now.

Will check back later here to see what has transpired. (The NYPD requested a DOB inspection at the site.)

Webster Hall closed last Aug. 10. Brooklyn Sports and Entertainment, along with AEG-backed The Bowery Presents, bought the building from the Ballinger family for $35 million in the spring.

The new owners will renovate the space. They filed the permits in December for the job, which includes interior demolition and structural work to help upgrade the facility and make it ADA compliant. 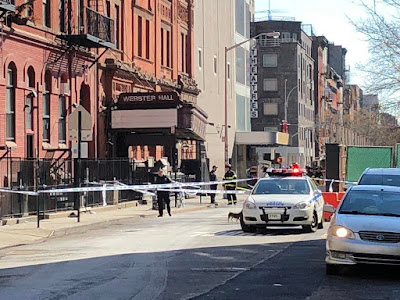 And some pics with the FDNY on the scene... 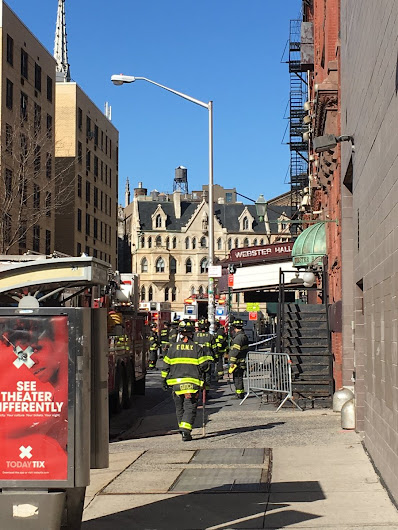 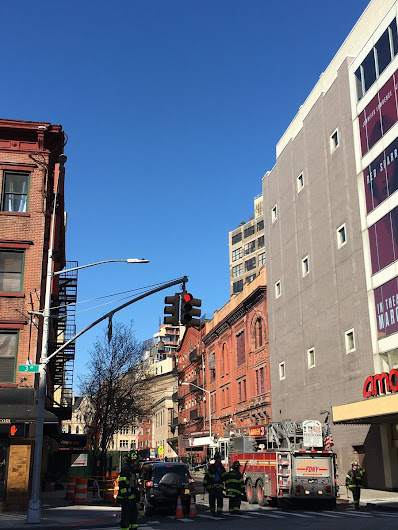 A little later, crews had temporarily propped up the right side of the marquee... the street remains blocked off... 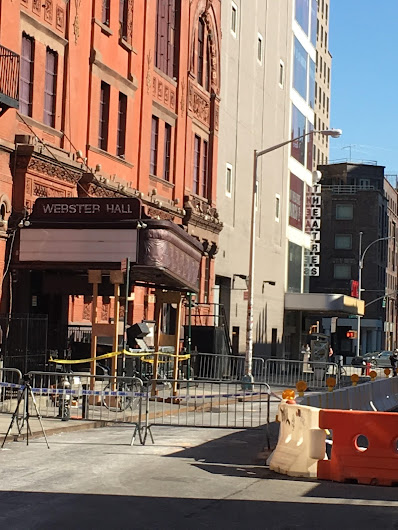 An officer on the scene said that no one actually saw the marquee come undone... one passerby tried to blame the constant construction across the street at the incoming Moxy hotel...
Posted by Grieve at 10:51 AM

Typical ploy. Now they can justify tearing down the building.

I would imagine the new owners would love to replace the 1920-30's marquee with something new and hi-tech, flashing LED screens, paid advertising a la Time Square. I hope the Landmarks people are insist on keeping this old one but these days money more than cultural heritage wins out.

By next week they will probably discover a mysterious crack in the foundation and decide the whole building needs to come down. #WebsterFalls

Guess someone tried to blame the 4 to 7 inches of snow that never happened.

Looks fine to me.

It collapses after it closes down? Fishy.

Sometimes you just need to keep walking until you find something good in this town.

On 8th-9th Street and 3rd Ave: The Continental is complaining about people using the word “literally” because finding a cause that actually matters is literally too difficult for them to do,

On 11th Street & 3rd Ave: The Webster Hall marquee is collapsing, the owner is cited by the DOB for not properly maintaining the building, while just across the street the Moxy. Hotel replaces affordable housing.

On 12th Street & 3rd Ave: The Ainsworth opens and then immediatley gets closed down by the Dept. of Heath, in preparation for a summer of unnecessary noise and mayhem.

Meanwhile on 13th Street & 3rd Ave: Tonight The Brazen Fox hosts an event for the Alumni of Marjory Stoneman Douglas High School in Parkland, Florida, the location of the latest school shooting, where 17 students were killed. The Alums are getting organized to support their school and to get ready for upcoming protests against gun violence in New York, Washington DC and around the country,

It’s nice to see that at least one of our local nightspots is doing something positive for the world. Just keep walking and you might find something good too.

One of the work crew onsite yesterday claimed a passing truck had clipped the marquee. No idea whether that's true, or just a theory/alibi. Seems unlikely though, since there's no sign of any impact.

I am sure if a passing truck struck the building the worker noted the license plate and reported it to the police.