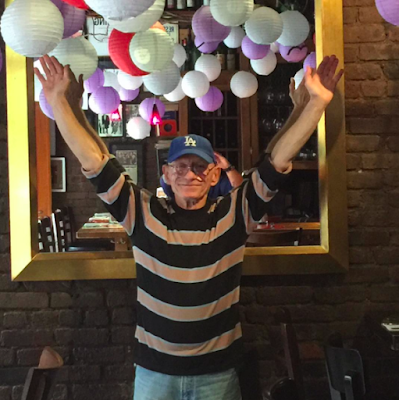 If you've been on Second Street between Avenue A and Avenue B, then you've likely seen Mikey Evans. He was born and raised on the block, and has lived his whole life at 190-192 E. Second St.

He hasn't been feeling well of late, and Julio Pena and Beatrice Tosti di Valminuta, the husband-wife owners of Il Posto Accanto at No. 190, are collecting get-well wishes for their longtime friend.

Here's what they had to say via Instagram yesterday:

Mikey has been a little under the weather. A lot of you, near and far, noticing his absence have been asking for news. We do not have much in terms of updates, but if you want to drop off a get-well card at Il Posto, we will make sure he gets it. Love and well wishes are always a good idea.

Beatrice later told me that Mikey is "the all-around greeter of Second Street — the sunshine of the block with his smile." When Julio and Beatrice opened Il Bagato in 1995, people thought that Mikey was the owner. "And we liked that."

I see him all the time and I always wondered what his story was. Like the headline says get well soon, Mikey!

i was just thinking about him this morning when walking the dog. will have to drop a card by il posto.

I don't know Mikey but he sounds like a wonderful man and I wish him well!

I had just stopped by, asking how he was, Julio showed me this article
Feel Better Mickey

Always see him on the street cleaning or tending to the flowers. A very friendly fellow. Be well Mikey!

Everyday Mikey greeted me with a smile on my walk to the train.. such a gentle soul, with a green thumb I might add! Get well soon! XO