Maria Hrynenko due back in court on March 23 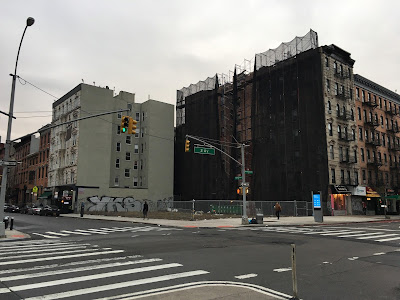 On Tuesday, Nexus Building Development Group filed plans to build a high-end condo at 121 Second Ave., where one of three buildings were destroyed in the deadly gas explosion in March 2015.

Last June, Nexus paid $9.15 million for the empty lots at No. 119 and 121 between Seventh Street and St. Mark's Place. Public records show that Maria Hrynenko's companies — MAH Realty and Kiev Realty — were the sellers.

In February 2016, Manhattan DA Cyrus Vance's office charged Hrynenko and four others with manslaughter and negligent homicide for their alleged role in the blast that killed two men and injured more than a dozen other people.

News of the proposed condo prompted questions about the pending trial against Hrynenko and the others.

According to court documents, Hrynenko will be back in court on March 23 — almost three years to the date since the explosion leveled 119-123 Second Ave.

Records show that Hrynenko and the other accused have appeared in New York County Criminal Court 12 times since February 2016... the outcome was the same "adjourned/bail continued" ... 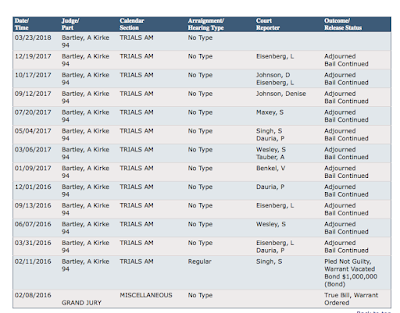 As previously reported, Hrynenko and her companies have been hit with at least 28 civil lawsuits.

Meanwhile, last June, Hrynenko filed a lawsuit, claiming that her management company was "careless and reckless" in its work. In the spring of 2015, as investigators focused on her actions, a lawyer for Hrynenko said that Con Edison bore responsibility for not shutting off the gas during the visit to the property earlier that day.

Vance's office charged Maria and her son, Michael Jr., along with contractor Dilber Kukic and plumber Jerry Ioannidis with manslaughter in the second degree, criminally negligent homicide and assault in the second degree, among other charges. (The final defendant, licensed plumber Andrew Trombettas, was charged with offering a false instrument​,​ for allegedly lending his name and license number to paperwork.)

The five were accused of installing an illegal gas system, which they hid from inspectors, at No. 119 and 121. All five pleaded not guilty.

An obituary posted last August at the Pizzi Funeral Home website stated that Michael Jr. died on Aug. 25. He was 31. A cause of death was not disclosed for Hrynenko, who was also called Mischou.

Kukic, Ioannidis and Trombettas will appear in court on March 23 with Maria Hrynenko.

Read the previous coverage here.
Posted by Grieve at 4:20 AM

Maria, you can’t build a death trap and blame Con Ed. It doesn’t work that way.

I remember at the time this happened some people were blaming the japanese restaurant that was there for the illegal gas connection. They were wrong. The gas connection is the responsibility of the landlord/owner of the building. I wonder if the businesses and the tenants of those building are suing also. So much loss. And those two poor guys who died.

de Blasio is shameful. I hope you know that our neighborhood is a pleasurable sacrifice for most.

If you look back at the comments from that day, some people were pointing fingers at the landlord, knowing that there were ongoing renovations in buildings, while others were actually defending the landlord and asking what could they possibly have to do with the sudden massive explosion and fire. It quickly became apparent that someone was messing with the gas lines, and that the landlord was somehow behind it. Now we see some people defending the landlords right to sell the buildings, making a huge profit from this tragedy, saying it’s a free market after all. When will we realize that landlords rights are not above every single human’s rights to live in a home that is safe from the kind of greed that motivates landlords to put people’s lives at risk? Until we put people over profits, these kinds of tragedies will continue. .

I suppose owners of those destroyed buildings will have more money selling the lots than if he buildings were still standing. Out of tragedy comes profits.

I don't understand. Is it legal for Hrynenko to profit from her wrongdoing? Is it allowable because she she's merely been charged, not (yet) convicted?

What 'wrongdoing'? She hasn't been found guilty of anything yet. 'Allowable'? Until and unless she is convicted and exhausted her appeals she is free to do what she wishes with her property. This isn't something decided in the court of public opinion.

As a lawyer who litigates in state court frequently, all I can say is shame on the criminal judge for allowing these scumbags to stay on bail for years instead of answering for their crimes by adjourning 12 times! State court judges in New York, especially the five boroughs, are the laziest, most unprofessional judges in the country. They don’t even read legal briefs that are submitted to them! The civil court judge should have ordered that sale proceeds be held in escrow, but again, this is the quality of justice we have in nyc. The state courts are also highly corrupt and operate on the favor bank so accurately described in bonfire of the vanities, but that’s a whole other can of worms. Thanks everyone who voted against the constitutional convention!

@3:45 Is there anything that can be done now, can the state court be sued?

I agree with the lawyer who commented at 3:45 PM. Common law should replace state law--then justice might be served.

Civil Asset Forfeiture does not require a conviction or even criminal charges. Typically the police are only required to show that there is evidence that the seized property was involved in wrong doing.

If the city requested for the federal government to investigate this explosion there is a chance that the feds could use Civil Asset Forfeiture to seize the property as it was an instrument in the murder of two people.

The city or the state should have done something to prevent his property from being sold to the highest bidder. By doing nothing they seem to me to be complicit with the crime. It's outrageous.

8:03 makes a great point, why wasn't civil forfeiture invoked? This is on the DA and the feds too. Send a letter to Cy Vance, he's politically weak right now and will not want an uproar about lackadaisical prosecutors. I would bet that the prosecutors agreed to every adjournment under the notion of "professional courtesy".

As for what can be done about the state judges, not much. Judges have absolute liability; you can't sue them. You can put political pressure on them. Showing up at the parking lot with a group of protesters with big signs they see as they walk in in the morning does do something, as does packing the courtroom. Unfortunately, most judges run unopposed for election. How it works - I'm not an expert on this - is that the democratic party elects judicial delegates, those delegates then vote on who gets the D imprimatur in the election, and that person typically runs unopposed (leaving aside Staten Island). Election of judicial delegates, in turn, flows from the political power of local democratic clubs, i.e. Village Independent Democrats etc...Keep the judge's names in mind and make hay about them if you're in a Democratic club. I do remember this last election cycle that there was enough political pressure against a judge who made some sort of pre-civil rights era ruling in a divorce case and a big segment of the county democratic clubs voted against her being endorsed by the delegates and she may have lost her judgeship. Otherwise, vote for the constitutional convention in 20 years. The best way to wield political power as a citizen in Manhattan is to join a local democratic club and be vocal.

I wonder if the parties behind the ghoulish deal waited until after the election for mayor and council to arrange the sale.

Maybe she needed the money for legal fees.
Imagine that bill.
She may not be ending up with lots of money afterall.
Crime Pays if Youre a lawyer ! :) ( supposed to be witty joke )
So, if she was truly guilty and her greed was the cause of the gas explosion, then besides
every other loss, two humans, pets, possessions, building, land, etc, her own son, she no longer
is receiving rental income, lost that as future income, and whatever she had is now
going towards legal fees, to keep her out of jail as long as possible.
She has no piece of mind, over the loss of her son, all the other losses and mess she allegedly created -
and for what ?
Penny Wise and Pound Foolish.

I suspect the delays are a combination of complexity due to the number of defendants plus a reflection that the DA does not have a strong case. If you look at similar high-profile cases, they are typically brought to trial much more quickly.

Let’s not be apologists for a DA who is known to give the rich and powerful a pass. Cy Vance, like most DAs, cares about his win/loss record first, and justice somewhere way down on the list. DAs aren’t supposed to only bring cases when they’re a lock. Like the false pit bull preet bharara, Cy Vance’s 90+% conviction rate is a mark of cowardice, not talent. I know a lot of prosecutors. They have meetings before bringing charges or proceeding with a prosecution and are supposed to go through a 10-15 factor test to see if they should proceed. At the very bottom of the list is “likelihood of conviction”. That’s the only factor they actually talk about in those meetings, and is the primary criterion for whether a prosecution will be brought. Like SEC lawyers, they’re all just making sure their conviction rate is high for when they flip sides and go into private practice. It’s a broken system. We need to pay them way more - the DA has 750+ million in hand just from asset forfeiture, but pays ADAs with 10 years of experience 90 grand a year - and then ban them from working in white collar defense for 20 years after they leave.

So, if she was truly guilty and her greed was the cause of the gas explosion, then besides
every other loss, two humans, pets, possessions, building, land, etc, her own son, she no longer
is receiving rental income, lost that as future income, and whatever she had is now
going towards legal fees, to keep her out of jail as long as possible.

I seriously hope she has three kinds of antacid in her medicine cabinet and two kinds of narcotics to help her sleep. Anyone who has to say, "I'm a good person"—that was an actual quote from her—is rotten to the core.

I know her. And she is a good person. So was her son. Better than anyone who would try to hurt someone they don't even know