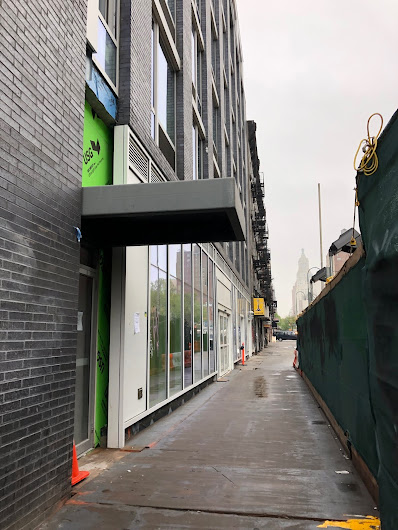 Trader's Joe's has added 432 E. 14th St. to its list of store openings (H/T to the commenter who shared this!) ... officially confirming what was pretty well-known already... 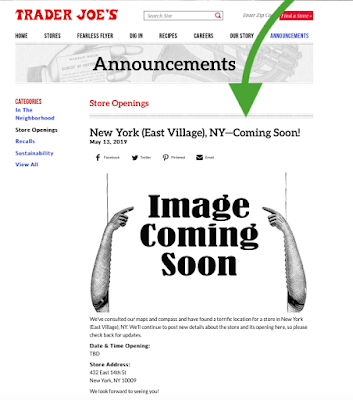 In early February, an EVG reader spotted equipment marked Trader Joe's being moved into the retail space in the retail complex of the residential building called EVE here just west of Avenue A.

This confirmation arrives nearly two years since we first heard of a TJ's opening at this location. In May 2017, The Real Deal, citing anonymous sources, reported that Trader Joe's "quietly signed a lease about two months ago with Mack Real Estate and Benenson Capital Partners ... for 8,531 square on the ground floor and 14,170 square feet on the lower level."

However, there wasn't much else mentioned about this possible new TJ's location (aside from some TJ clerk gossip that it wasn't happening) in the ensuing months-years. Finally, in a preview of EVE last August, City Realty noted: "To the delight of residents and neighbors, Trader Joe’s is the building’s retail tenant."

Last October, I asked a Trader Joe's media rep at the national office if they were opening a store here. The response: "Unfortunately, we do not have any current plans for a store at that location."

Nevermind that TJ's was mentioned in the "East Village Life" section that lists nearby restaurants and stores. Per the EVE site: "Although with a Trader Joe’s in the building, you may not need to go too far."

Trader Joe's is reportedly tight-lipped about its operations ... which apparently includes not disclosing information about new locations, and likes to have store buildout details worked out before announcing a target opening date, as the Lo-Down has noted.

From the look of it, the retail space at EVE still has plenty of work left before it's retail ready. 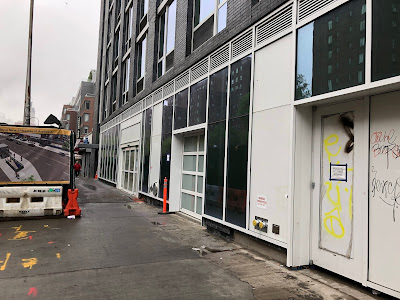 The store is also right in the middle of the L-train slowdown-repair zone... 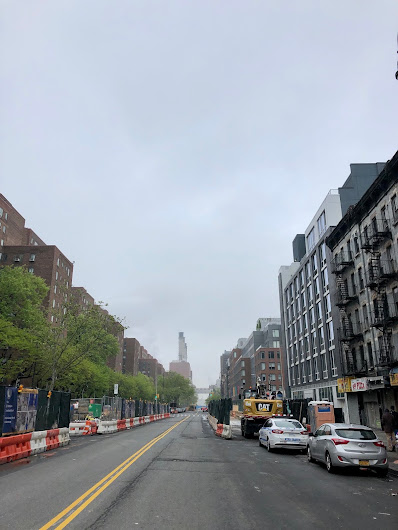 ... the new L-train entrance on Avenue A will be almost right outside the TJ's front door... 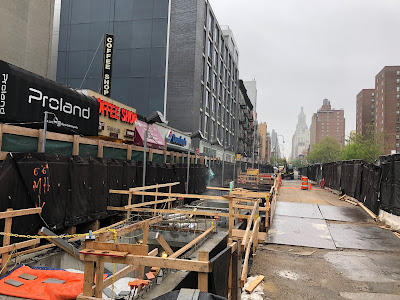 As previously noted, it will be curious to see what impact this might have on the Associated directly across the street as well as the food-heavy Target a few hundred feet to the east.

Who cares? The fuckers won’t deliver.

I stopped going to the union sq store for the obvious reasons, small store, insane lines. fortunately I prefer other places for most of my shopping including small shops and markets a bit closer. I have to admit having this new store 2 blocks away will be tempting and it seems to be large enough to actually move through it quick enough.

You can never get fresh meat at trader joe's. Look at all the chicken steak pork all of it is factory sealed from a warehouse they do not have a butcher on site like Associated. You can never know how fresh or old the meat actually is.

I don't believe there is any one stop for everything shopping in NYC, there never has been. We lost our bakeries for the most part, not taking about cupcake shops but real bakeries which bake bread. Fresh fish.... only supermarkets now, most meats I assume the same. Let's face it we don't live in the suburbs, we don't get in a car and load it with food from a supermarket, we are accustom to stoping a several places per week to buy ingredients we need. I feel the same way about TJ's I like some of what they sell but ignore most of it.

I'm a near vegan si I don't care about the meat/fish/chicen. But the rest of the items they sell are quality and low priced. And the lines have never been that long when I shop. I've been loyal since the day they opened. The only problem I have with them lately is that since they have been on a rapid expansion, they have a problem restocking their shelves. No good. But I still love the place/prices.

I don't understand all the animus that TJ's gets. True, they are not a one stop shop for all your needs. Some of their stuff is not that great. IN OTHER WORDS THEY ARE JUST LIKE EVERY OTHER GROCERY STORE AROUND HERE. Somehow though, they are seen by many as some sort of predatory menace, vis a vis places like Associated or Key Food.

I'm near vegan as well but I just can't get into the whole TJ's thing. Admittedly, I only visited a handful of times (at the Union Square store when it first opened). It seemed like less of a predictable grocery store—fully stocked with the usual assortment of fruits and vegetables and staples like bread, almond milk, legumes—and more of an entertaining purveyor of random prepared foods and fun snacky stuff clearly made for the stoner crowd.

I'm really not into premade or frozen meals, I usually just need some pineapple or black beans or whatever, but for many of the "regular" groceries, TJ's shelves were empty. Or maybe it's that I couldn't find what I needed among the chaos of cinnamon sugar cashews and IDK, Sriracha and pesto cheddar cheese balls. I just was like, where the hell am I, WTF am I doing in this place? Between that and the crowds I never went back.

So even though the new store will be a stone's throw from my apartment, I probably will only go there occasionally, when lines are short and I'm in the mood to be amused by groceries. Otherwise I expect to still be going to Associated twice a week, buying plain old broccoli like a boring person.

I also lament the loss of actual bakeries D:

Ah...Associated, where the cashiers want you to clearly know that you interrupted their phone call. If it wasn't for the Deli counter, I wouldn't step foot in this store. For local supermarkets, I like Key Food on Avenue A.

That's quite a contrast with the Associated on Avenue C, where the cashiers are so friendly, and the store manager and buyer are always around to talk to if there is a problem. So if you are frustrated, head down to C and 8th Street.

They're good for produce, chicken and some frozen food but I think it's mainly a cheap place for college students to shop at.