The former Grassroots Tavern space on St. Mark's Place is on the market 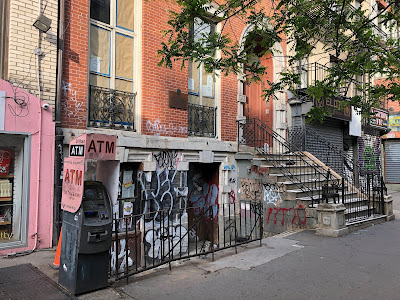 In recent weeks various tipsters have told us that the former Grassroots Tavern at 20 St. Mark's Place was now available for rent.

As proof, there's an updated retail listing for the space between Second Avenue and Third Avenue... 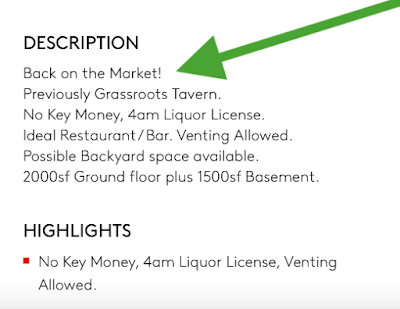 The asking rent is available upon request, per the listing.

This also must mean that the new bar slated for the old Grassroots spot isn't moving forward. For the past 18-plus months, Bob Precious had been planning on opening a bar in this semi-subterranean space with a working title of Subterranean.

Precious launched the mini chain of Irish-style pubs called the Ginger Man, including the one on 36th Street. CB3 OK'd his new liquor license for 20 St. Mark's Place in December 2017.

He told us said last August that the former Grassroots space was in bad shape — including structural damage. The approvals for the renovations in the landmarked building had been slow going. In November, Previous was hoping for a spring opening.

He did not respond to an email about this latest development. Updated: Precious confirmed that he is no longer taking the space. We'll have more about that in another post.

Meanwhile, gut renovations continue inside the space that was, for 42 years, home of the Grassroots until New Year's Eve 2017.

Jim Stratton, the longtime principal owner of the Grassroots, sold the business in 2017. In January 2016, Stratton sold the building to Klosed Properties for a reported $5.6 million.

The address, known as the Daniel LeRoy House, was built in 1832. It received landmark status in 1971, and added to the National Register of Historic Places in 1982.

Today, the front of the former Grassroots is covered in graffiti.

Last call at the Grassroots Tavern
Posted by Grieve at 4:30 AM

A bait and switch? Noooo, impossible.

(Are beer stores still a thing?)

so for 18 months, they let it get graffitied, and ruined further, just to walk away. I bet they are asking of even more now.

This could be a key space on the block with a dining room upstairs and connected waiting area/pub/casual bar downstairs - but what nut would take the risk in 2019 NYC?

Hey, why not open a bar again, and call it Grassroots II?

I miss Grassroots every day