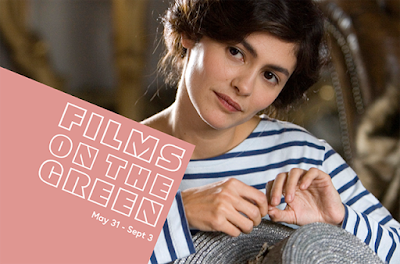 The 2019 Films on the Green season begins tonight with the first screening in a summer-long lineup that "focuses on female directors in French and Francophone cinema through a selection of 13 movies."

Here's more about what to expect via the EVG inbox:

This 12th edition pays tribute to “Women Behind the Camera” in honor of Agnès Varda, feminist filmmaker and pioneer of the French New Wave, who passed away earlier this year.

This year's selection highlights the diversity of French and Francophone cinema, featuring movies from Lebanon, the Ivory Coast, Mexico and Turkey, and shines a light on well-known woman filmmakers as well as emerging ones.

And there will be two screenings each in Washington Square Park and Tompkins Square Park:

And a season-preview video that I whipped together for you ...

Email ThisBlogThis!Share to TwitterShare to FacebookShare to Pinterest
Labels: Films on the Green, French things