A visit to Sei Shin Dojo on Avenue A 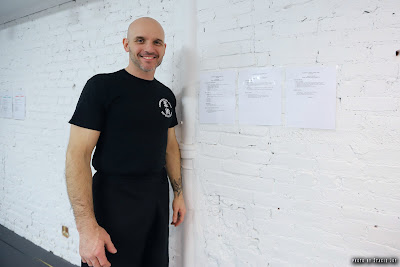 I have zero experience with martial arts, not in any form, so I wasn’t sure what to expect setting foot in a dojo that teaches close-quarters live-blade combat fighting, or Pekiti-Tirsia Kali (PTK) and American Jiu Jitsu (AJJ).

The second-floor space at Sei Shin Dojo, 34 Avenue A between Second Street and Third Street, is large, well-cushioned, spotless and airy. 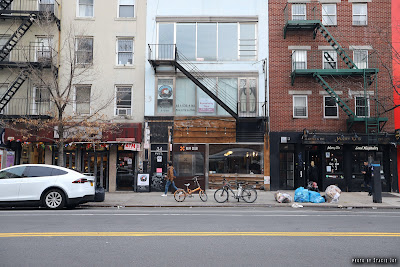 And owner Glenn Genovas, an East Village resident who is a third-degree black belt in AJJ and a certified instructor and guro in PTK (as well as being a licensed massage therapist), was welcoming, precise and patient in answering my novice questions.

I also got a chance to observe both a kid’s and an adult’s class as well as seeing — from a safe distance — Genovas wield dual swords.

Can you speak a bit about the history of Sei Shin Dojo?

Sei Shin Dojo doesn’t have a long physical history, but spiritually it has deep roots. A friend of mine opened a dojo in SoHo in 2001, where I trained and taught since 2004. It was a multi-discipline dojo with four styles of martial arts offered.

Each style had its own head instructor, and each ran his own program at the space. My friend, the owner, was the head instructor for American Jiu Jitsu. In 2014, he decided to let it go: the dojo would have to close.

While the other three programs went their own ways and found new spaces, there was no one to take over the American Jiu Jitsu program. I had been running much of it for some time, so when he told me he was going to close it, I had to decide: either lose it completely or take over the program myself.

There were many students of higher ranks training, so I decided it was worth continuing to keep the program available for the core students — and to build on its success if I could. “Sei Shin” means pure heart, and it was with a pure heart that I decided to open in January 2015.

What made you choose the East Village to open your dojo, and when did you do so?

I always wanted to live in the East Village. I was born in NYC but raised in Huntington, Long Island. Growing up out there, my imagination was captured by amazing stories about the East Village.

As I grew older and was able to come into the city in the late 1980s and early 1990s, I saw the East Village as a place without judgment, where you could dress as you liked, be who you wanted, and, for the most part, where people from all walks of life got along.

Of course, back then there was some funkiness mixed in, but that made it exciting! I moved in — and stayed. Between my childhood love of the East Village and already living here, it felt natural to bring my dojo here too.

Even though the East Village has changed over the years, it still has that neighborhood feel I like. I enjoy meeting my neighbors and chatting with them about their businesses and the neighborhood. Knowing your neighbors, who they are as people, not just the business next door, lets me feel like I am not just any old business, but part of a real community.

So, after a couple years renting spaces from other local martial arts and dance schools, I knew I wanted to settle the dojo somewhere south of 23rd Street and north of Canal Street.

While finding a space, getting equipment, and managing all the paperwork that comes along with owning a dojo are challenging, I finally found this place on Avenue A, took the chance, and opened Sei Shin Dojo in its first real home in January 2017.

Can you talk a little bit about your history with martial arts and how you feel the practice benefits the community?

I have studied martial arts since 1982. Through the years, I’ve met, studied, and trained with other martial artists, most intensively in Japanese Jiu Jitsu and Filipino Pekiti Tirsia Kali. I also have experience in Brazilian Jiu Jitsu, kickboxing, and arnis. I went to college for athletic training/sports medicine and I’m a licensed massage therapist as well.

Combining the two disciplines (martial and healing arts), gives me an understanding of human anatomy from two different, complementary perspectives: the knowledge of anatomy and body mechanics in movement, the understanding of the body’s responses to injury or trauma, and the skills to heal sports injuries; and how that double skill set can be practically applied, both to martial arts techniques and to helping people recover from trauma or injury.

Having my healing practice in the same location as my martial arts studio enables me to optimally combine both disciplines when teaching about not only self-protection, but living healthfully through movement as well.

Teaching movement based on sound body mechanics will keep my students healthy in their later years, while it builds the confidence to successfully handle difficult life experiences. 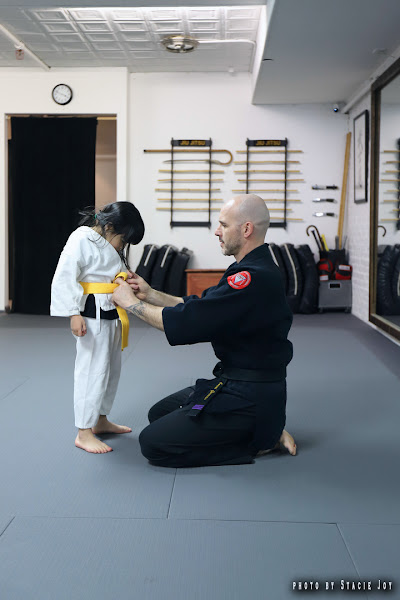 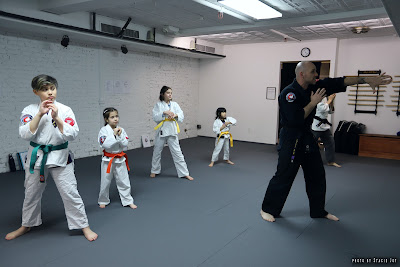 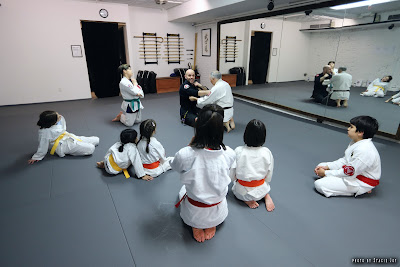 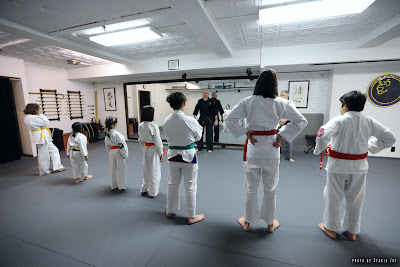 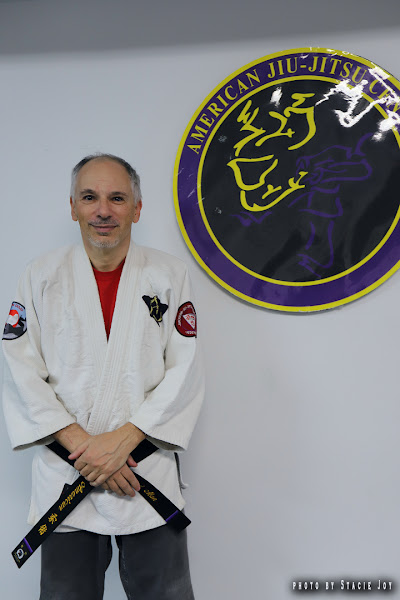 What can newcomers expect in your classes?

We expect new students to learn and have fun. We are a semiformal dojo, where we aren’t too strict about formalities. Our goal is to educate our community about the connection between health and movement, using the healing arts of medical massage and acupuncture, the movement arts of yoga as well as the martial arts. 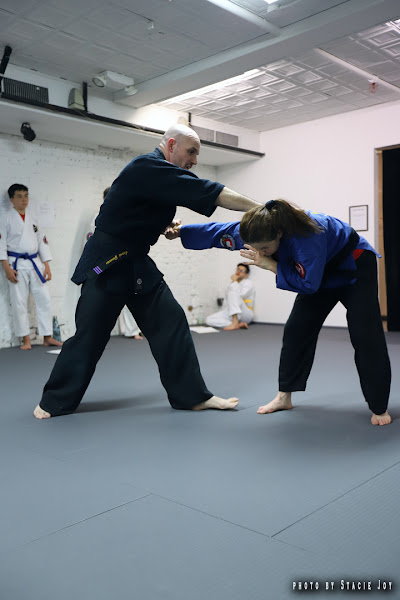 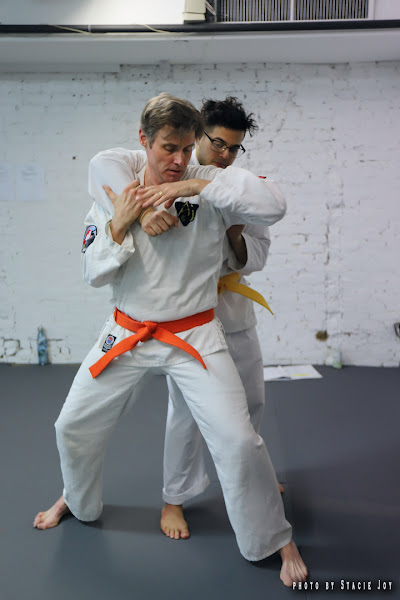 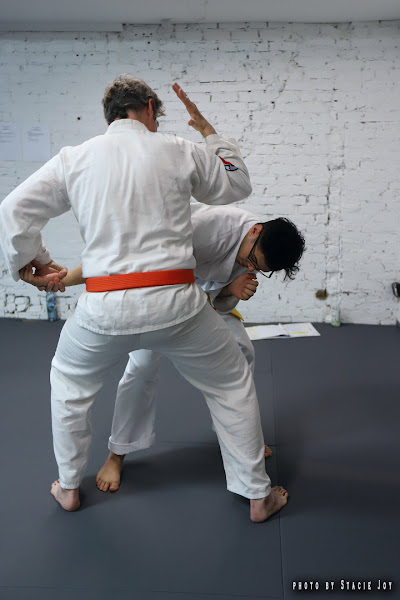 What’s next for Sei Shin Dojo? Any plans to expand?

We plan to offer a special seminar to the public in June on using an umbrella/cane for self-protection. We would like to stay in the East Village area as long as rent stays affordable. Even with all the changes going on in our area, the East Village still has the charm that inspired me when I was a kid. 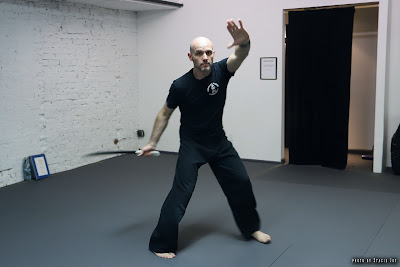 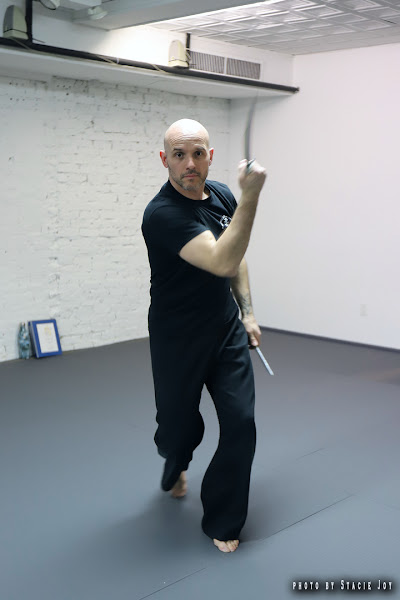 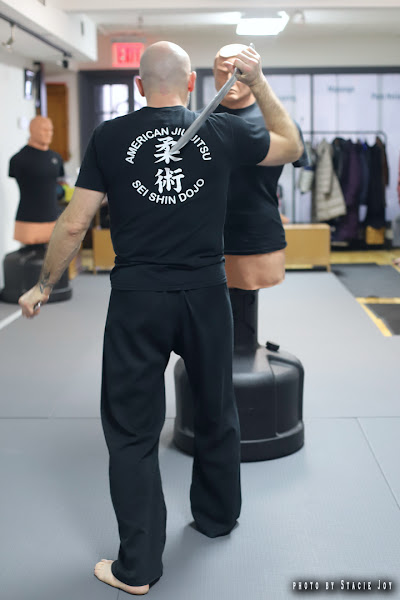 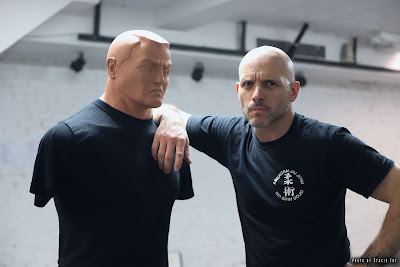 A great place to train! All walks of life, body types and attitudes, and they all come together. So glad I found this Dojo!

I feel blessed to have trained with Sensei Glenn for 13 years. This is a special community.