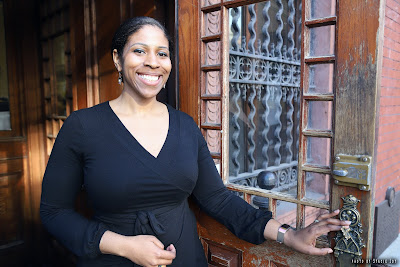 The Ottendorfer Library was born in 1884 as NYC’s first free public library.

When it reopened in March at 135 Second Ave. between St. Mark's Place and Ninth Street — after seven months of fire-system and safety upgrades — a new librarian joined the team.

Friends and neighbors, meet Sam Jackson. (And she’s heard all your "Snakes on a Plane" jokes.)

Here's her story — and her love of manga — in her own words:

I grew up in Miami. My dad was a school janitor; my mom wanted to be a school social worker. Their pay wasn’t great, but what they had was time – if there was anything my sister and I were into, they were all let’s do this!

When I was into King Arthur and the Knights of the Round Table, Egyptian gods, anime — they were all about letting me explore those things. When one day the TV broke, and my mom says, “We’re not going to replace it,” we were all, “OK, whaddaya gonna do? Let’s read!”

I had a reading disability as a child. So when parents tell me they don’t want their kids to read graphic novels because it’s bad for them and it won’t help them read – well, I can speak from personal experience: Manga gave me the visual stimulation I needed and helped me match the words with the images and helped me love reading.

After college, I did a teach-abroad program in Mito, a small Japanese town that’s mostly famous for its natto — fermented soybean. Natto is to Mito like pizza is to New York. I had it in omelets and with Kewpie Mayo and on toast and with radish. Love it. You can’t get natto like that here.

In Mito, I mostly hung out with the oba-chans, the little old ladies. I volunteered at local community centers and the oba-chans gave me informal Japanese cultural lessons. There can be a lot of xenophobia in Japan, but people in their 80s and 90s embrace foreigners.

After the war, the American government sent soldiers to help rebuild; Blacks and Latinos were often sent to the rural country and the Caucasian males were sent to the city. I learned the words “good people” and “good memories” – and “eat, eat!” Tabate tabate! Everywhere I went, the grandmas wanted to feed me. OK, I will eat this random rice ball on a random train from a random stranger!

I studied technical theater in college, and after Japan I started working Off-Broadway as a stage manager. Still reading my little manga backstage. I was doing "And Away We Go" with Donna Lynne Champlin — two hours, no intermission — and it was [looks down, mimes turning pages] read, hand over the cigarette, read, hand over the gun. Fun. But the hours and the junk food and the no sleep were getting to me. I’d always wanted to work in the library, and now I thought “I need to make this real because my health can’t handle this.”

I love being a librarian. Free books! All you can read! I love to help patrons. You want a place to visit for free while you’re visiting New York City? I got you! Arts and crafts with kids? Yes! I get paid to go to New York Comicon and Anime NYC!

I started out at Seward Park, where my manga collection was the whole back wall. It was so beautiful. A thousand books. The teens in that space would devour them. One summer, four of my girls read the entire collection. It is the most satisfying thing when I see a graphic novel I just ordered missing from the shelves.

A few days ago, I ordered Planetes, Food Wars! and Fairy Tale Book 1 – all good introductions to manga. And they’re all gone. It’s great.

For teens, I often recommend Assassination Classroom. It feels new and different. There’s an assassin creature that wants to destroy the world, and he’s working as a junior high teacher. It’s not what you think it’s about. For both teens and adults, I really like What Did You Eat Yesterday?, a cooking manga about two men who are opposites who live together in Tokyo. One cooks and the other eats. One is a lawyer and the other is a beautician. Each book is a year in their life. It’s emotional, and the cooking stuff is so great; it’s just a sweet slice of life.

Personally, I love Solanin. It’s such beautiful art, and it’s about growing up and finding your place in the world. Not everyone loves it, but I gave it to one of my teens and she was crying. Not like secret-crying, like fully open this is good stuff! crying. We were in the teen room and I played her the song in the book — Solanin was made into a movie, so you can listen to the song — and she was crying and her friend was crying and I was gonna cry and I’m all, “I’M GONNA GET FIIIIIRED!”

The NYPL in general has a really good collection of manga and graphic novels. What’s on the shelves isn’t a hundredth of what we have. We have over 100,000 manga in the system. I rotate the section at Ottendorfer out every other month. I’ll talk about manga to kids, to grownups — to anyone who’s willing to listen. I’m kinda pushy.

Come talk to me. If you tell me what you’re interested in, I can probably recommend a manga you’ll like.

Previously on EV Grieve:
The untold tale of East Village shopkeeper Santo Mollica's comic-book past
Posted by Grieve at 5:30 AM

Wow! Not my closest branch, but what an interesting and dedicated librarian. Thanks for posting.

Welcome, Sam Jackson! I *love* librarians - my niece is one - and I find them to be among the coolest, most interesting & interested people you will ever encounter. Their devotion to their work & to the readers who walk through the doors of the library is absolutely magnificent! Three cheers for librarians!

I love this SO MUCH! We are lucky to have her in the neighborhood.

I met Sam - she's really friendly and so helpful! Happy to learn more about her.

So happy to have her in the neighborhood! What a great life story.

I knew Sam at Seward. Great librarian; miss having her there.

SAm is awesome -she recommends books to my little one - and she is SPOT ON !

what a great addition to the library ;)