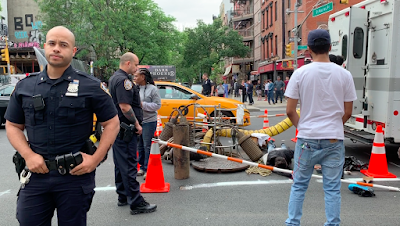 According to several readers, an Interceptor SUV from the NYPD's 9th Precinct was traveling north along First Avenue — with its siren on and lights flashing — when it struck a cyclist crossing at St. Mark's Place this afternoon just before 4.

Witnesses believe that the cyclist, riding an e-bike and heading east, had the green light.

The images here are screengrabs from a 6-minute video that a reader shared showing the aftermath of the collision. (From the look of the crowd that had gathered, multiple people were filming this.)

The force of the impact propelled the cyclist into an area on First Avenue where a Verizon crew was working. One man on a hoverboard, a constant presence in the video, says: "He almost flew inside the truck! That's how hard they hit him." 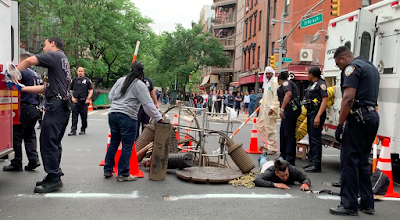 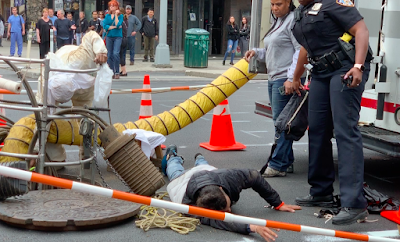 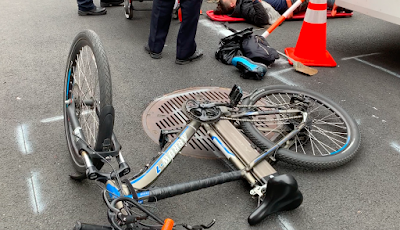 From the video, the cyclist seems to be in a great deal of pain, screaming when the EMTs try to place him on a stretcher. He motions that he broke a leg. (The reader claims that the NYPD tried to make the man get up before the EMTs arrived, though that wasn't on the video.) 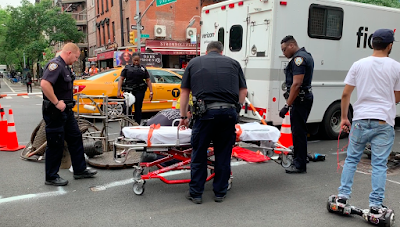 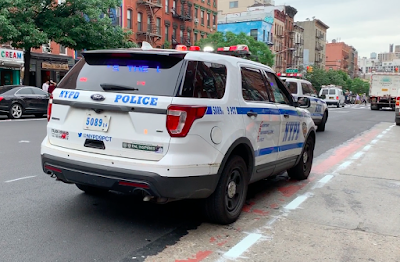 You can see the indentation where the SUV struck the cyclist... 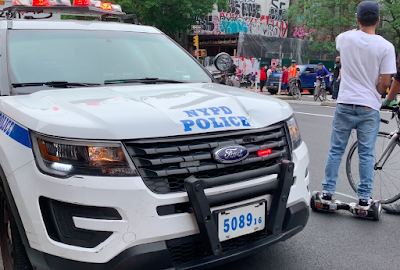 We'll update when we receive more information about what happened and the cyclist's condition.

Patch follows up our story with a few more details.

The police were responding to a 911 call in which a 15-year-old boy was slashed at 14th Street and First Avenue.

The cyclist, 36, was taken to Bellevue with back and leg injuries.

And: "After the incident, cops slapped the e-biker with a summons for failing to yield to an emergency vehicle and operating an e-bike."
Posted by Grieve at 9:42 PM

Even Zoltar could see this lawsuit coming. This is why the NYPD’s motto is To Protect and Swerve.

I live across the street. I heard the impact several flights up. Once it happened, 3 additional police vehicles showed up immediately but it took about 10 minutes for an ambulance. Onlookers in the small gathered crowd kept loudly asking "where's the ambulance?" I didn't know that the cyclist was hit by the cop car right away but kept thinking the ambulance was taking an overly LONG time. Throughout, the crowd seemed pretty agitated over the police handling of the scene with several of them videoing and taking close-ups of the police car involved in the impact.

The cyclist was heading east? Doesn't the traffic on 9th Street flow west?

Yes, the cyclist was heading east. And yes, the traffic on 9th Street flows west.

And if you read the post or at least the headline, you’ll see that he was traveling on St. Mark’s Place and correctly moving with traffic.

Everyone always wants to blame the victim

Cycling is such a dangerous sport here in NYC. I have witnessed an endless array of cyclists wearing no helmets. I have also seen a few run into pedestrians with such aggresion. Its another world. I used to wear my headphones listening to music when I wallked. Now, forget it. I am fully alert and look both ways. Perhaps this vehicle became overzealous or careless. We should not assign blame on the cyclist. From the look of the photos though, he wasn't wearing a helmet. This is how one can die from internal bleeding and brain injuries. It doesnt appear he suffered that. Lucky guy. All of us from pedestrians, drivers and cyclists need to be cautious, respectful and aware. I hope this cyclist will get the proper care he needs. Let's all be kinder to one another too.

I know the cyclist. He was working (delivery man) at the time. He has internal bleeding, a broken knee and his pelvis is broken in 2 places. Praying for a full recovery.

Ano 10:42AM, that sucks! If his relative sets up a GoFundMe page, can you post it here? It will take him a while to recover.

OMG. Internal bleeding? I certainly hope he will be okay. I hope the driver is arrested.

The bike clearly has a battery mounted to the center post so by definition its an e-bike. I wouldn't be surprised if the cops fine the guy for operating a legal electric bike and then blame him for the accident.

Cyclists beware of ticketing in this area. I wish this was just a sick joke. This is how NYPD mocks cyclists. Whenever a cyclist gets hit by a car, NYPD responds by stinging cyclists in that area, busting them on technicalities like not having a headlight, or a bell. Or they will bust for not wearing a helmet, which is not even against the law! (for any rider over age 14) There is no logic to any of this, not even a pretense of logic. This is plain and simple, one group of people mocking and abusing another.

9:30 Anonymous. I agree. I am a pedestrian, cyclist and driver in NYC and everyone needs to pay attention, be respectful and put the phones down. Hopefully, the guy will recover and the driver charged.

The police may react by giving out tickets but bikers traveling up 1st Avenue this morning texting while riding the bike seem to have no concerns.

The MAIN point is that I hope the bike rider makes a full recovery.

My secondary concern is: Why the hell is anyone riding a hoverboard in NYC? They're illegal and a GREAT way to potentially burn down your home (and/or your neighbors' homes too). Are people really so self-involved that they (a) don't give a fig about safety of others, (b) don't care about the law at all, and (c) can't get around in some other, safer way? IMO, anyone on a hoverboard should be arrested & the board confiscated *and destroyed*.

Of course I hope the cyclist recovers which should be the main concern. If he is a delivery person chances are he doesn't have insurance. A Go Fund Me page would be a good idea.

However, as to the police giving out tickets to cyclists it is because residents frequently attend the monthly community meetings at the 9th Pct complaining about cyclists not paying attention to red lights, riding in the wrong direction in the bike lanes, riding on the sidewalks as well as being run into by the cyclists. They are responding to complaints by pedestrians not doing it to mock cyclists.

It's not a sport - it's a necessary mode of transportation. No one is out "getting excersize" - we're busy getting from point A to point B - either getting to/from work, or delivering your food.