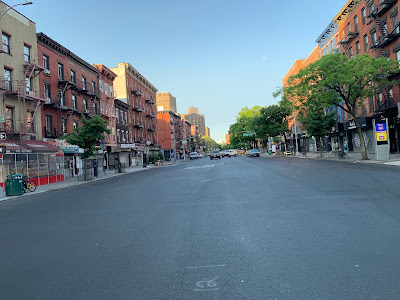 As you've likely noticed, the city has resurfaced parts of First Avenue (above!) and Second Avenue in recent weeks... (top two photos via Vinny & O) 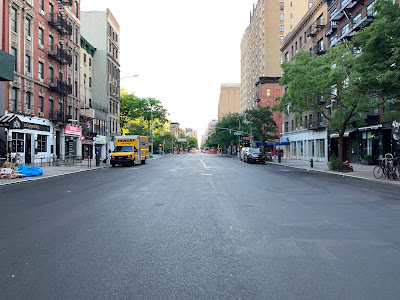 The DOT has now added the markings to the roadway for the crosswalks, bike lanes, etc... 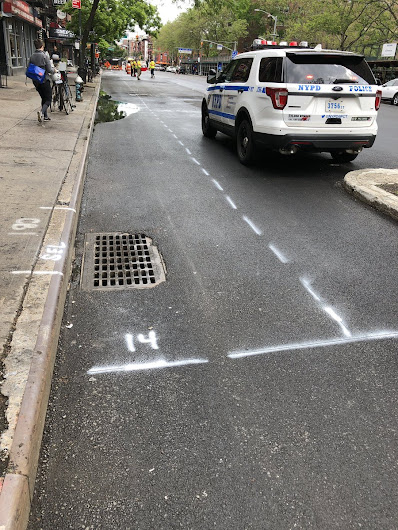 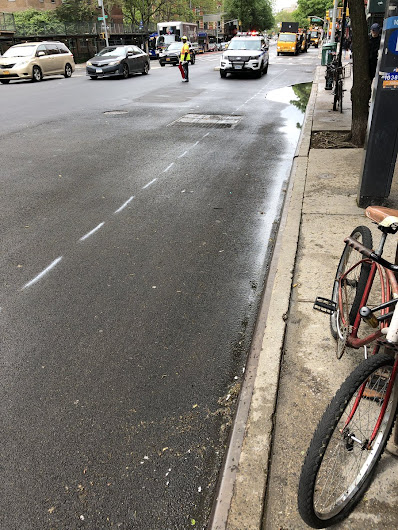 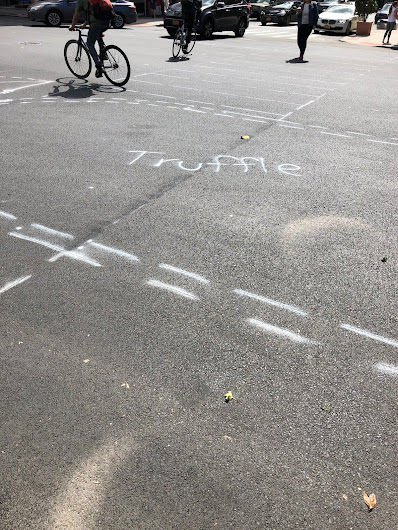 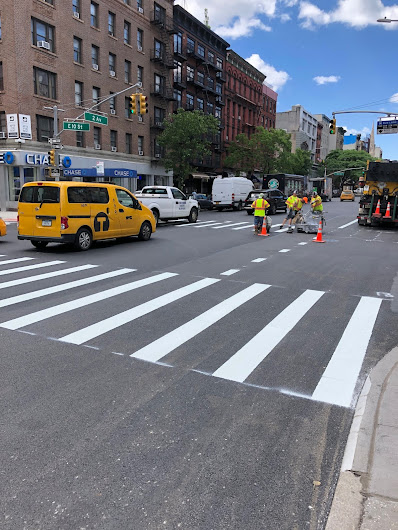 With the resurfacing comes an important change at intersections to make them safer for pedestrians and cyclists. The city is adding offset crossings, like you'll find on Fourth Avenue at 13th Street ...

Paving is now complete on 1st and 2nd Aves in the East Village. Our markings contractor will soon begin installing roadway markings. Crews will be updating #bikenyc intersections, adding off-set crossings to many of the intersections in this area. #BikeMonth pic.twitter.com/tQxPdN0VIY


This morning crews are on 1st Ave in the East Village laying out where markings will soon be installed, including a new offset crossing at E 5th St. #bikenyc #BikeMonth pic.twitter.com/ssNIP8WKcT


As David Meyer reported last week at Streetsblog, the arrival of offset crossings in the East Village comes two years after the driver of a box truck reportedly made an illegal left turn turn — across multiple lanes of traffic on First Avenue at Ninth Street — and slammed into cyclist Kelly Hurley, who later died from her injuries. 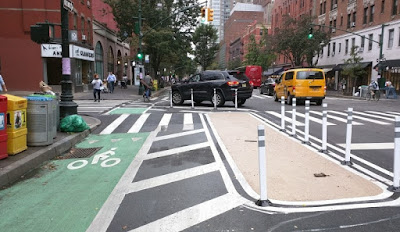 [An example of offset crossing on 70th Street and Columbus Avenue]

And a look at First Avenue and Ninth Street on Saturday... 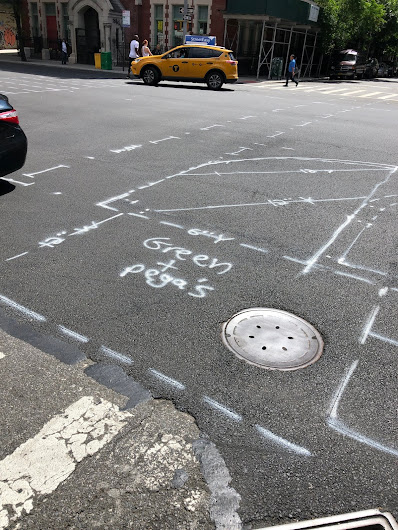 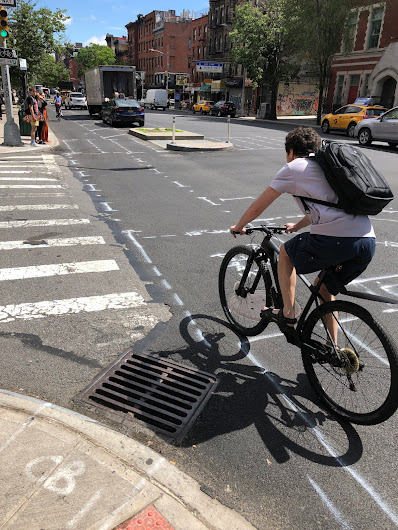 On Sunday, the Post, citing NYPD data, reported that "traffic crashes have already killed 71 people this year, up from 58 during the same time period in 2018 — a 22 percent surge."

In total, 39 pedestrians and 10 cyclists have been killed by cars or trucks on city streets this year. (There were 10 cyclists killed in all of 2018.) Drivers or passengers in vehicles accounted for the other 22 fatalities on city roads.
Posted by Grieve at 4:30 AM

simply put---it 'forces' everyone to have eye-contact :)

Now we need the city to re-inforce the pedestrian islands in concrete. It has been 9 years since the 2nd Av protected bike lane were installed yet 2nd Avenue between 23rd St and Houston St lack concrete pedestrian islands similar to the ones on 1st and 4th Avenues. They do exist on 2nd Av south of Houston and north of 23rd Street.

Thank you afbp, I couldn't quite figure out what it achieved but this makes sense.

It seems confusing. You need to be in a helicopter to look down and figure out what is what. Few if anybody(drivers/bicyclists) speeding along 1st/2nd Ave will pay heed - if they can figure out what heed is. This is overkill not a practical solution. Actually it;s more about placing the blame on somebody because so many traffic death/injuries end up nowhere in the blame department. And one thing about our times - we do like to fix blame..

gripe gripe gripe, at least the city is doing something, and perhaps lives will be save because of it.

Quite frankly I've been enjoying the entire width (albeit short-lived) of Second Avenue. No bus lane, no bike lane, no loss of traffic lane with cars parked away from the curb. The air has been fresher too during the afternoon exodus with no stalled traffic squeezed into two lanes where there used to be four. Just sayin'.

I don't like these offset crossings. I prefer the mixing zones, which give riders the option of merging behind cars and passing on their right. Now you cannot pass, instead you must force turning drivers to yield to you (while you pass inches from their front bumper). This takes so much control away from cyclists.

Also I do not believe that an offset crossing would have saved Kelly Hurley. The person that hit her wasn't just making a regular left turn, he cut across the entire width of 1st avenue starting from the rightmost lane. That is to say it was not a fault of the street design, it was entirely the fault of that reckless driver. He could make the exact same reckless move today, right through the offset crossing.

Agree with @12:15pm! Is NYC going to send out a mailer to every home to explain all these markings to us? I've lived here my entire life and have never seen such confusing & un-intuitive markings on a street. Just looking at it makes my head hurt. It's like having to interpret ancient runes.

Our city is heading for ancient ruins because of its planners. I was against the bike lanes from the beginning and it’s only getting worse. Why? Because it does not save lives. It only confuses drivers and riders with new rules to obey, more to pay attention to, with an increase in traffic jams. When riders used to drive within traffic, drivers were alerted that a rider was part of the lane and could pop up at any time, which maintained everyone’s level of alertness. The seconds it takes for new rules to be figured out during transit may cost lives.

I don't agree with the offset crossings. This doesn't stop aggressive drivers from ignoring bicyclists in the bike lane or stopping short in the bike line when a pedestrian is crossing the street. (I've seen this happen at 4th ave and 13th st). It'll also bunch up traffic in the west most lane on 1st ave, leading up to the Offset Crossing.
The better solution would have been like the left turning lane on 1st ave and 14th st, where there is a traffic light that allows bicyclists to first pass unobstructed and menaced, and then vehicular traffic, at their turn at the light.

It's nice to see a solution that protects both cyclists and pedestrians.