Behold these murals uncovered behind the bar at the former Grassroots Tavern on St. Mark's Place 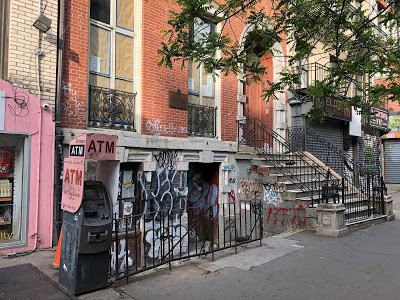 Workers continue to gut the subterranean space at 20 St. Mark's Place where the Grassroots Tavern was for 42 years (1975-2017).

And late last week, EVG contributor Derek Berg got a look inside at the murals that were discovered on the wall when workers ripped out the bar ... 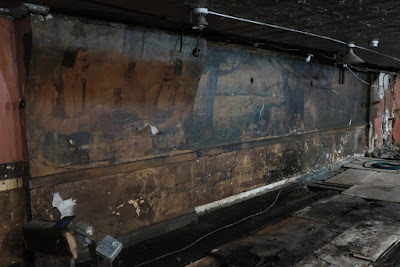 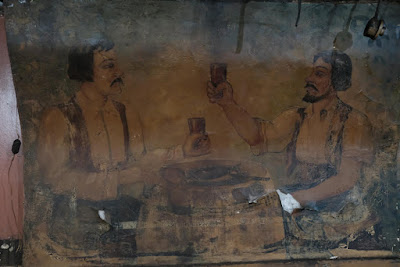 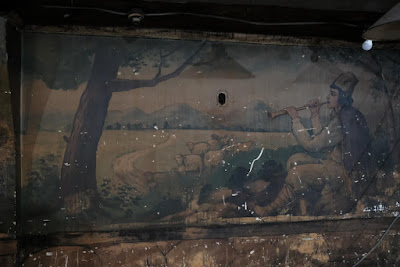 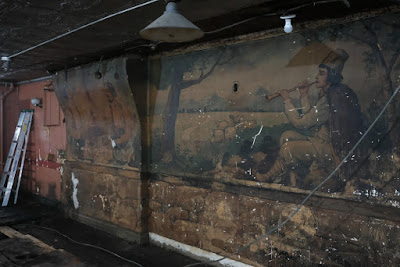 We don't know how old these are. As we recall, the Grassroots space was previously a Greek restaurant. (If any pre-1975 historians or former GR employees want to chime in about these murals.)

The address, known as the Daniel LeRoy House, was built in 1832. (It received landmark status in 1971, and added to the National Register of Historic Places in 1982.)

Thanks to Gar for this link to Daytonian in Manhattan with a post on the history of the building:

By 1931 the house was home to the Hungarian Cafe and Restaurant. An incident there on July 1 reflected the gangster-driven atmosphere of the East Village in the Depression Era.

Abe Rothbard was playing cards in the cafe that night. Police later noted he had a criminal record. Patrons noticed an unknown man open the door and motion for Rothbard to go outside. When he reached the door, the man beckoned him to step further out on the sidewalk.

The Times reported "He followed him to the stoop and then four shots were fired by a third man from the sidewalk. Rothbard fell, seriously wounded." The mysterious attackers escaped.

At the beginning of the Depression, Urbain Ledoux had opened The Tub, a homeless shelter, in the old Schuetzen Hall down the block at No. 12 St. Mark's Place. Ledoux, known to the men he helped as “Mr. Zero,” accommodated 135 homeless men on cots and steamer chairs. He advertised “auctions” of the men’s services in order to find them temporary work. On New Year’s Day 1929, over two thousand homeless men ate dinner there. The line outside was unbroken from early morning through the afternoon.

The year following the hit on Abe Rothbard, Ledoux took over the Hungarian Cafe. On January 3, 1932 The Times reported "Urbain Ledoux, who prefers to be called 'Mr. Zero,' announced yesterday that he would open a week from today a temperance saloon to be known a the 'Growler' at 20 St. Mark's Place. He intends to sell in it near-beer for 3 cents a glass; baked beans, soup, pudding, bread, pies and cake at 1 cent an order." Down-and-out men could "take their ease and play dominoes, checkers or cards, or read the newspapers."

Also late last week, EVG reader and GR regular Eskapee took possession of part of the former Grassroots sign (a worker was putting it out for the taking). 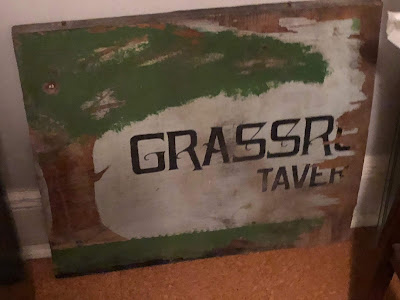 Meanwhile, as we noted last week, the space has been on the retail market. This apparently brought an end to the nearly 18 months Bob Precious had spent trying to open a bar-pub here.

In an email on Friday, Precious provided a recap about what happened to his venture, tentatively called Subterranean:

Essentially, the landlord was not able to deliver the space to us. We waited almost a year and a half from the time we signed our lease for them to complete their work and, as of April 1 of this year, they were not able to commit to a date when their work would be done.

It could easily have been a two-year total wait — an impossible situation for a small company to be in. We had fixed costs — salaries for two employees hired specifically to spearhead that project, and had paid professional fees — designer, legal, structural engineer and HVAC, and could not rationalize staying in any longer. A sad situation for us because we believed in the bar and the location.

There are several unsubstantiated rumors making the rounds about the building between Second Avenue and Third Avenue, including that a new tenant has been signed for the old Grassroots space — for an unspecified Asian-style eatery.

What is known, however, is that the place needs a lot of work. Steven took these photos yesterday... showing the old GR bar sink going off to parts unknown... 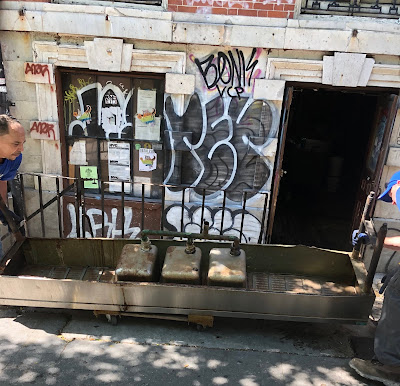 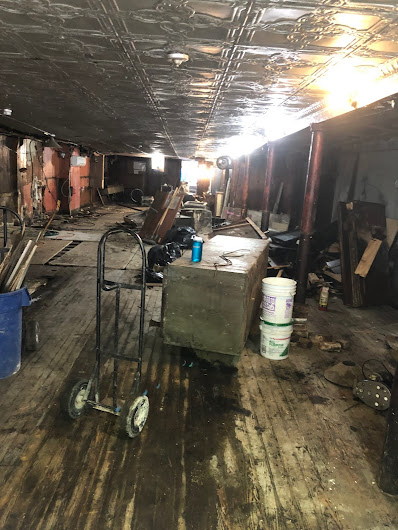 Last call at the Grassroots Tavern
Posted by Grieve at 4:30 AM

Shades of Maxfield Parish. It's like a low rent King Cole Bar. Given its subterranean soace, maybe its new incarnation can be the King Vole Bar.

Sounds like the landlord was waffling looking for the better deal - we all know when they want to get things done it gets done...

I bet 10 bucks its gonna be a Starbucks. That almost 2 year “delay” sounds kind of suspicious,

So maybe it was a Hungarian cafe?

I've been living on St. Marks Place since 1970. When I moved there the bar was named Mike's Tavern. Mike was a WWII veteran and didn't like the hippies taking over the block so he sold it to Charles Fitzgerald and a partner named Aaron. They renamed it Grassroots. We had our block association meetings there and there was often live acoustic music by locals. Charles sold it in '75. I never saw or heard of any Greek restaurant being there. PJG

with any luck those murals can remain.
Mister Zero would be proud.

Those murals are incredible, regardless of age. Is there any way they can be salvaged or saved? Lord knows whoever can afford to take over the space will likely have no use for them and they'll be destroyed....

It never ceases to amaze me the historically relevant business signs and whatnot that still exist under modern facades. If only there was more being done to preserve these little blips of history...

Breaks my frickin heart. Honestly i wish 20 St Mark's could be razed to the ground. Whatever corporate entity that puts some lame attempt at 'cool' there will fail miserably. My stomach literally turns when i look at yhese pics. Meh.
Anyone know the fate of the telephone booth? Many nights sitting/standing next to it. Part of the job.

Does anyone know the fate of the phone booth? Having spent quite a number of years sitting/standing next to it i hope it wasn't outright discarded. It was yet another character in the 40+ year run. I find some sense of relief that Dad didnt have to witness this sad end.

Hi, I'm an Art Conservator in the neighborhood. Without knowing too much about the history, I'd say these appear to be 'Early 20th Century', or somewhere between 1920-50 based on the condition and style and the neighborhood... possibly even a bit earlier.
Anyway, they definitely need some work, which is not quick or cheap. Sadly it looks like they are on the wall and safely removing them may not be possible.

The phone booth is still there as of today with all of the stuff still in it.

In 1895 #20 housed a wine room kept by a man named Charles F. Wickenheiser, who bought the building that same year from a John W. Miller.

Also, in 1963 there was a newly opened coffee house and restaurant called the Porpoise at that address.

I'm assuming both occupied the ground level, but that's hard to know.

EV Grieve commenters are the BEST. Thanks, all of you!

Also, how about an interview with PJG one of these days? 49 years on St. Mark’s is some serious neighborhood history!

Strange as it may seem, I seem to remember that just before the group of friends (Jim, Ned, Rita, an Englishman whose name I forget, and Doug) rented the space (later bought the space) it was an Indonesian Restaurant.

When Jim, Rita, Charlie and I opened in 1976 it had been vacant for a few months, (Jim and I knew Charles Fitzgerald from Oberlin) It had been an Indonesian restaurant, and Boris (Fitzgerald's Obie nickname) had run it as a bar, but locked the doors because his manager was ripping him off. When Boris bought the building it had been a bar-- called, as I remember, Nick's. In the 60's, Nick had modernized by putting formica over the mahogony bar. Boris (thank goodness, ripped it off and gave us that great wood bar (one of the longest in the City). We once looked into redoing the back bar and discovered a large convex are behind the mirrors. That's probably where these murals are. But we never saw them because the weird shape made it ridiculously expensive to redo things. Nick's was quite a going thing in the 50's. I'm pretty sure it is the place referred to in Henry Miller's Nexus and Plexus. Not surprised to find there were artists involved. Oh, and yes, when we bought the building it had clearly been a flop house.
ned schneier

Your romantic perspective of being a savior and contributor to this building for 40yrs+ has only resulted in additional severe damage by your participation in a highly profitable cash-only bar within this "flop-house." Great that so many have had so many enjoyable memories and times in the joint. The neglect and violations upon the patrons, space, building, and parting employees is simply neglect. You and your partners have gotten away with it and hurt many mostly.

The remaining onion is gradually being peeled back with regard and consideration. It will survive without all of you thankfully.