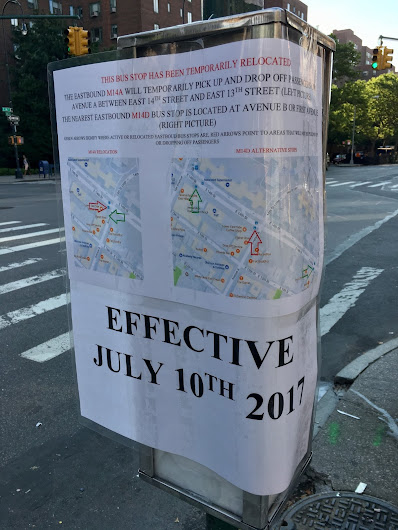 Starting today, the MTA is relocating bus stops for the M14A and M14D between First Avenue and Avenue B.

For instance, the eastbound M14A will now pick up and drop off passengers on Avenue A between 14th Street and 13th Street ... the signs kind of explain the new system... 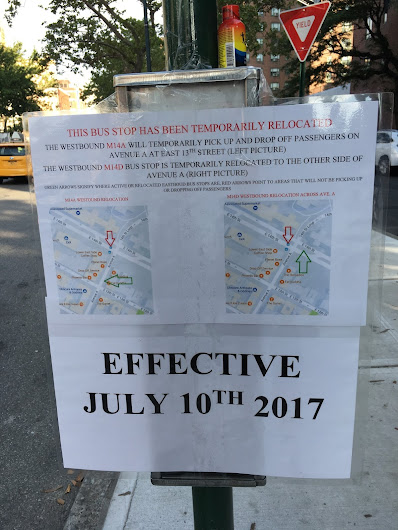 This is all apparently in preparation for building new entrances at Avenue A and a new power station at Avenue B for the L train. The MTA has said that the Avenue A entrances would serve 60 percent of the station’s ridership. (The First Avenue station sees 24,286 daily weekday riders, according to the MTA's website.)

As previously reported, this work is starting ahead of the L train shutdown between Bedford Avenue and Eighth Avenue to repair the Sandy-damaged Canarsie Tunnel. The shutdown of the L is expected to last 15 months with a start date of April 2019. The MTA signage on 14th Street notes a completion date of the fourth quarter of 2020 at a cost of $900 million. 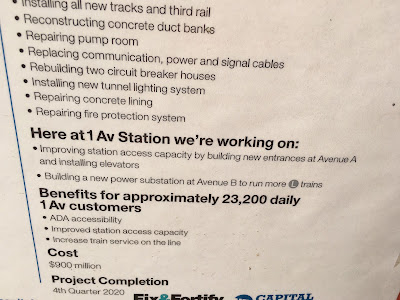 Here's part of an MTA news release from March:

Prior to the tunnel closure, extensive station work will be performed that will increase operational efficiency and improve accessibility and circulation. Station improvements at the 1 Av and Bedford Av L Subway stations will include new stairways, and four ADA-compliant elevators and other work to improve customer flow.

Construction of a new Avenue B substation and other infrastructure will address power requirements that, combined with the existing CBTC signal system, will allow more trains to run on the line to accommodate growing ridership.

There's no word how long this First Avenue/Avenue A station work will last. Presumably you won't be able to take advantage of these new entrances until the fourth quarter of 2020 when the L train tunnel rehabilitation is complete.

And here's a look at where some work has already started taking place, such as across from the Associated Supermarket... 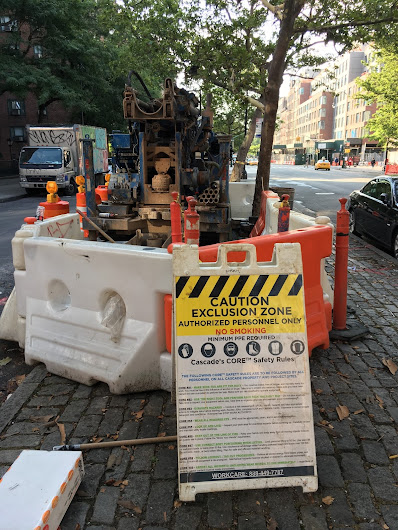 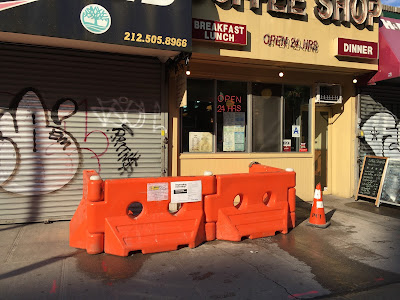 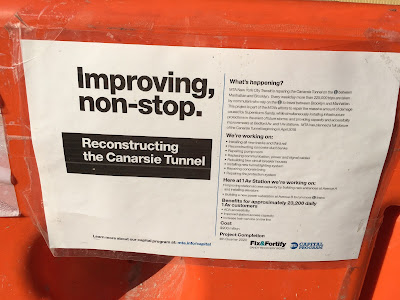 ... and just east of Avenue B, there are barrels set up around the Citi Bike docking station, which likely seems to be a candidate for a relocation... 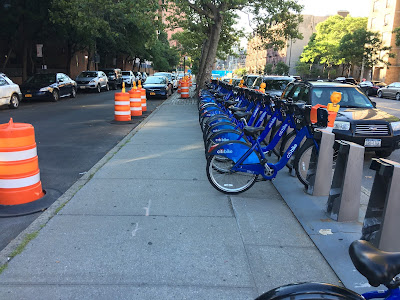 Workers have also removed the bus shelters on 14th Street, in an unannounced move. Town & Village noted this back on Friday. The MTA gave this convoluted statement to them:

The existing bus stops on the westbound side of 14th Street on the island at Avenues A and B have shelters which were removed this past Friday in advance of the two bus stops being relocated this week. Both of these stops which are on the west side of the intersection now and will be moved to the east side of the intersection. The bus shelters will not be installed at the temporary stops but will be replaced at the end of the project when the stops are relocated back to their permanent location.

So no bus shelters here until the work is complete.

Previously on EV Grieve:
Avenue A L train entrance closer to a reality … some day
Posted by Grieve at 4:30 AM

Hi guys! Don't forget to patronize the shops that are stuck behind these orange walls of doom. Otherwise, it will mean that more local businesses will struggle and close...like on Second Avenue on the UES. Don't be part of the purge! Walk through, not around mess.

Even when they try to 'improve' things, the City always FUCKS THINGS UP

The other commenter is right. Those of us who live in this wonderful neighborhood should not forget nor neglect the businesses who will be either directly or indirectly affected by this new development. Let's remain positive for an expedient outcome. Having a subway entrance to Ave A would be wonderful.

Just in time for the pending L train closure?

My head is spinning from trying to figure out what is going where and what it all means to getting around. Agree with 1st poster, don't forget the businesses semi-blocked by all the construction and orange barriers.

Agreed this is going to be a s***show for this corner especially bus takers but yes yes yes to 7:53 keep getting your shoes resoled at L's shoe and iphone repair, akina sushi, the pet shop, the fruit stand! the smoothie store and little delis and more. What a nightmare between the condo and now this. : /

So they put the new entrance in and then they shut down the L train? Oy!!!

Hey, agriculture in Cuba improved non-stop too when Castro nationalized the farms and Che shot some protesting farmers.

No, this is exploratory work for the construction of the entrances. The entrances will probably be built during the shutdown, although some portions of the excavation support might be installed before. There's a huge amount of utility work, too, in this area that's piggybacking.

I am thrilled these staircases and elevators are going to exist. Back in 2003, I was working on a joint venture where I actually could talk to someone higher up in the NYCT's engineering dept. I frequently mentioned how (relatively) cheap it would be to add entrances at the east end of 1st Avenue...now they just have to get built.

Not sure what a power station does but it would make more sense to put between 1st & 2nd Ave as 14th & B could get flooded again.

"Fourth quarter of 2020." So it takes over three years to build two staircases?

You sure it started today? When I caught the 14A at Union Sq. the bus made its usual stop at Avenue A/14th ...

Entrances at Avenue A are long overdue and will be wonderful. More people want to go east from the station anyway, and it's currently insanely crowded with only one entrance for each platform. No train for a year, but when it's done this will be a huge improvement. Lemonade from lemons, people!

"Fourth quarter of 2020." So it takes over three years to build two staircases?

Yes. It took 3 years to build a pair in Queens after the MTA scheduled it for two including the elevator, which is still inoperable after a year. Good thing you noticed that they schedule in quarters, which I believe gives them an excuse to delay.

There will be two elevators one on each side of the block
because of the ADA requirements . This unfunded Federal mandate was the reason that it has taken so long for this entrance to be created and why it cost so damn much.

Yeah, I agree. Unfortunately, the mezzanine isn't deep enough to be able to extend under the road without hitting sewage, water, electric, communications conduits. Tunnel isn't that deep here.

yes, like all capital improvements, it's going to be a pain, but long term this is something the neighborhood has needed for a long, long time.

Funny you should mention ADA requirements, the F station in Briarwood went through a 3 year renovation and got an elevator, the truly messed up thing is that there isn't another elevator to go to the subway platform, so the handicapped are stuck unless someone helps them.