Report: DBGB is closing on the Bowery 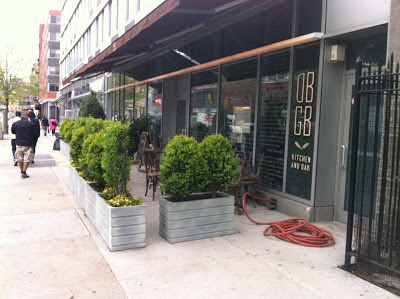 Daniel Boulud has announced that he is closing DBGB Kitchen and Bar on Aug. 11 after an eight-year run in the Avalon Bowery complex between First Street and Houston.

"In this location, it’s busy on weekends but erratic in the early part of the week," he told The New York Times. "I hope to find a more appropriate space for it in New York."

Per Eater: "The neighborhood is changing," says Boulud of his decision to close the "very good restaurant" serving tuna tartare, lamb ribs, and boudin Basque.

Curious how the neighborhood is changing in his estimation — getting too upscale for the likes of DBGB? Or changing in that the Bowery hasn't really taken off like people anticipated. A good number of retail businesses have come and gone. Ditto for restaurants. For instance, PYT — "Home of America's Craaaziest Burgers" — closed after just three months in a space that was previously home to three restaurants in fairly quick succession. L'Apico closed in May after five years around the corner in the Avalon Bowery Place complex.

Anyway, farewell to DBGB... I enjoyed keeping tabs on its sidewalk cafe in the restaurant's early days... 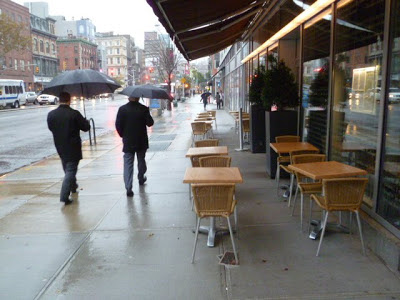 Previously on EV Grieve:
How DBGB is 'pissing on the grave' of punk rock

Why we're writing about Duke's Bohemian Grove Bar in Buffalo

Email ThisBlogThis!Share to TwitterShare to FacebookShare to Pinterest
Labels: DBGB

I noticed something funny about those towers too, especially at night last winter. I swear 70% are dark, and I am counting all of them, even the one around the corner from Whole Foods. Nobody is living there.

The food here was consistently good and in its early days the bar scene was rather sexy. But today it is just too far north of Houston Street. What's that you say? It is only a thirty feet north of Houston Street! As I said, it is too far north of Houston. With all the construction on the corner of Houston and Bowery (years..many years), the location was terrible. Too much noise from traffic because of the construction. Too much dirt and dust from the construction. Not great signage. Nothing else on the block to draw people there. A park next to it that is open "sometimes", "sometimes not." Plus let us not forget that if you eat outdoors on the Bowery you still have a lot of homeless and/or recovering abusers in the remaining shelters just next door and around the corner. Who can sip $20 glasses of champagne with $30 plates of steak tartare and not feel a twinge of guilt as a shoeless, dirty, inebriated resident of the Bowery walks past you...not even looking at you. I'm amazed at the outdoor eatery of Bowery Hotel...how it manages to sit right between two homeless shelters as people pull up in a $100K automobile to be seen.
Too bad DBGB was a nice place, but as they always say, when it comes to a brick and mortar business, location, location, location.

If only they served La Croix, then there'll be there for the long haul.

DBGB is one of the establishments that authenentrified EV and was unapologetic for it and proud of it. They wanted to pay "homage" to the neighborhood's past by having the interior make it look like a kitchen-supply store, the ones that were pushed out because the presence of the likes like DBGB.

"It's busy on weekends but erratic in the early part of the week" -- sums up the restaurants and "restaurants" and other foodie and "food" and dessert shops that have opened up and are opening in the neighborhood -- tourist and transient destinations.

The problem isn't the location. It's the food. The food is very, very heavy. I ate there twice, trying to give it a chance, but it wasn't for me or anyone I know.

@10:24am: "authenentrified"? Can you possibly elucidate what that means?

I tried it once in the spirit of trying new neighborhood things. Food and bev was good. Upscale douche bro vibe is not for me though. I tend to mentally sneer at the place every time I pass by. I know fine dining is all around us but this place somehow seemed more obnoxiously classist than most.

I'd say wrong crowd on the Bowery but the truth is... there is no crowd, at least not enough for retail/food at high rents.

| I noticed something funny about those towers too, especially at night last winter. I swear 70% are dark, and I am counting all of them, even the one around the corner from Whole Foods. Nobody is living there.

I ate here once a few years ago. Had sausages and drinks and for four of us the bill was $300. It's kind of hard for me to feel bad for a place like for going out of business. This place is true to the East Village the same way Varvatos is "paying homage" to CBGB by selling $200 T-shirts in their old space. Au revoir.

DBGB...sounds/reads/looks like CBGB. Too bad CBGB didn't sue them just to scare them. Good riddance to this place.

Bring back CBGB! Can someone buy the CBGB building from the asshat who owns it?

One of the most solid restaurants in the neighborhood. You could spend $20 or $200 and be completely satisfied. You'll be missed DBGB.

I'm glad that they are closing.I applied to work there a couple of times and they gave me the classic NYC runaround. They are known for their discriminatory hiring practices! %$#@ 'enjoying! Glad to see you fail!

Sooner or later this Avenue will bury you. Welcome The Bowery, where dreams go to die.

I really shouldn't humor you but since you asked to be schooled...

authentrification -- 'the seizing on elements that represent the area’s past and repurposing them as a design scheme for the quest of authenticity' http://thisrecording.com/today/2011/10/3/in-which-we-mark-graves-like-birthplaces.html

e.g. DBGB, and most recently a café serving forties of rosé served in a brown paper bag where they kept the supposedly bullet holes from the previous tenant in their joint https://www.google.com/amp/s/amp.theguardian.com/cities/2017/jul/26/bullet-hole-summerhill-bar-brooklyn-gentrification-crown-heights

Hope that vivification, 12:07 p.m., is perspicuous enough for your officiousness.

"the neighborhood is changing"

You been here eight years frenchie. Maybe consider that you yourself are part of this change you are bemoaning.