A bad sign at Heart of India on 2nd Avenue 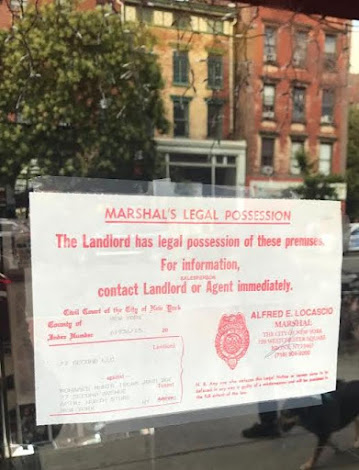 The Indian restaurant remained closed yesterday. (As always in these cases, this doesn't necessarily mean the end for the business.)

The address was also once home to the Binibon, where career criminal Jack Henry Abbott stabbed the owner's son-in-law to death in 1981 following an argument about the restroom.

Thanks for the comments. I took the Binibon info from The New York Times:

Weeks later, while eating with friends at the BiniBon, an all-night diner at 79 Second Avenue, Mr. Abbott became confused when Richard Adan, a part-time waiter, refused to let him use the bathroom. Within moments Mr. Abbott lured Mr. Adan outside, stabbed him to death and fled. At a Manhattan civil trial in 1990, the jury awarded Ricci Adan, Mr. Adan's widow, $7.57 million in damages, so Mr. Abbott will not receive a penny for the sales of ''In the Belly of the Beast'' or any other writings. At the trial, where he acted as his own lawyer, he told Mrs. Adan her husband's life was ''not worth a dime.'' Now 56, Mr. Abbott will become eligible for parole in June 2001.

Thanks to EVG reader Jonah Bayer for the tip!
Posted by Grieve at 4:10 AM

Email ThisBlogThis!Share to TwitterShare to FacebookShare to Pinterest
Labels: 79 Second Ave., Heart of India, The Marshal

Uh...the Binibon was on the NW corner of 2nd Ave and E. 5th where Cooper Craft is today. Eating at the Binibon was great. The chef was ...well let's just say there is nothing else like it. We had lots of local small restaurants in these few blocks that were better than anything we have today. Siam Square was an amazing Thai place on the east side of second ave between 6th and 5th. Bamboo House was a great Chinese place that had the best egg rolls and spare ribs you could find anywhere. A hot pot was what the rest of the food was cooked in and wow did it taste great.

Is this the same killer who inspired Mailer's The Executioner's song. I would check but the NYT limits the amount of articles read for nonsubscribers

Don't forget White Wave, that was a great place mid-block on the west side of Second Ave. between 5th and 6th, if I remember correctly. And of course, Kiev...

Pro-tip for JQ,LLC and anyone else who wants to read more than 10 articles at the NYT's online per month: simply type the article headline in Google and proceed from there. Works every time.

@ JQ LLC 12:30AM - Yes Norman Mailer was Abbott's benefactor. If I remember the details correctly, Binibon, at the time, had no functioning bathroom, and the waiter suggested Abbott go outside. With his convict mindset, Abbott interpreted that as an offer to "take it outside" and surprised the aspiring actor with a knife attack.

The Heart of India used to be Curry Mahal, across the street but got cheated out by another tenant making a deal with the LL. They have been my favorite Indian restaurant bar none for at least 15 years. I hope they get their issues solved. If not, it's a big loss for the EV.