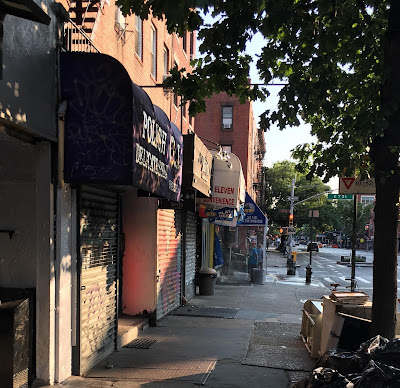 Back on Friday, an EVG reader spotted workers removing shelves and equipment from the Polish G. I. Delicatessen on First Avenue between Sixth Street and Seventh Street. With that, it appears the shop is now closed for good.

Eater reported that that the Eastern European specialty foods shop was closing on June 30. However, counterman David Cohen kept the space open for several weeks after that, selling coffee and doughnuts from the mostly empty storefront.

There are two versions of what will happen next with the business.

1) Cohen told Eater that they would be taking a two-month vacation and returning with hopes of opening in a new location. "Nothing is sure, but we'll see what happens," he said. EVG reader DrGecko said the shop would reopen on Ninth Street in September.

2) Multiple readers told us that chef-owner Grace Iwuc was retiring, and closing the shop. The retail listing for the space notes that "the owner is retiring and selling her 10-year lease of $2,600/month." Several readers wondered how a business could find a more reasonable rent in a different locale in the neighborhood.

Previously on EV Grieve:
Report: Polish G. I. Delicatessen is closing at the end of the month
Posted by Grieve at 4:06 AM

An odd ending to a wonderful store, it will be missed. I hope we see its return, but given today's realities, I tend to doubt it. Enjoy retirement, Grace.

this won't be a popular sentiment on this site. I really wanted to like this place but I rarely had a good experience here. David made me wait inside several times while he finished a cigarette or drank coffee and talked with friends. He then would give me the evil eye like i did something wrong. just here to spend money sir. any other place I would have left. Not all old places are necessarily great places.

Poster #2 I had a long-time Hair-cutter do that to me twice. You know as-if he was doing me a favor cutting my hair. Needless to say he is a FORMER Hair-cutter for me now and wouldnt be surprised if he is out-of-business before too long.

For whatever it's worth David has always been absolutely lovely to me -- a smile and a greeting every time I walk by.

Me too, I love this place. They were always very nice to me. I'll miss it.

This store has been there since the late 80's. I used to go there when the owner was Bella. Maybe then it had a different name.

Remember that other place maybe a few doors down, it was another type of Eastern European (or maybe Russian deli), but they had less stuff (so maybe Russian :)). An old woman ran it I think ...

Anyway, when I first moved to the EV, Polish GI was a fantastic spot, with nice Polish girls behind the counter that ran the length of the place, ready to get your pierogies, soup, or stuffed cabbage ... then one day they renovated, and there was no more counter, that's when Polish GI lost its soul (as far as I'm concerned).