The Great Jones Café is now closed, permanently or not 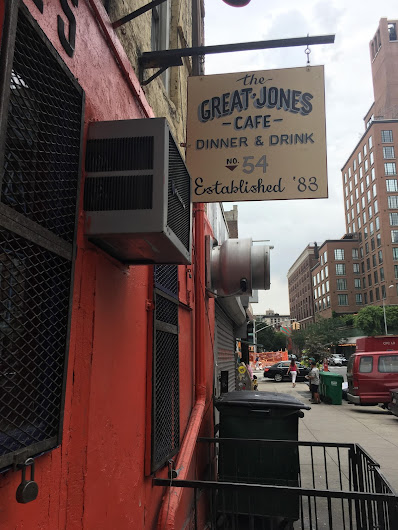 A sign appeared in the window yesterday at the Great Jones Café noting the following... 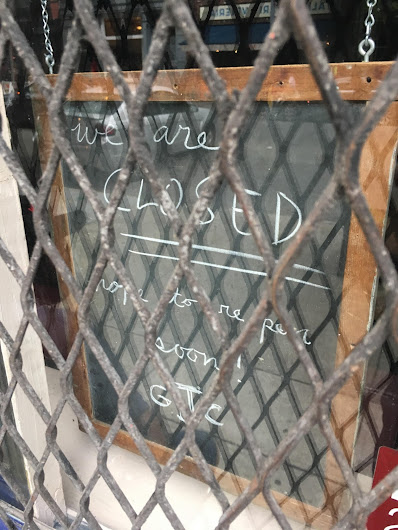 "We are closed. Hope to reopen soon!"

On Tuesday night, news spread — via the waitstaff — that the 34-year-old Cajun restaurant just west of the Bowery was permanently closing after service on Wednesday evening. (One waitress told a diner that their lease was up.) Meanwhile, in recent months, several people formerly employed by the Café had said the end was near, that ownership would try something more upscale to appeal to the changing neighborhood. There were a lot of rumors.

Later in the day on Wednesday, an unnamed employee told the Daily News that the Great Jones would close for a week of clean-up, and decide then whether or not to reopen. The employee said a permanent closure was a possibility, "but nothing has been decided yet."

Per Bedford + Bowery on Wednesday: "This evening, an employee at the Jones [said] that it’s closing for a week; after that it will reopen — or not. More likely not, she said."

And DNAinfo reported this:

A waitress working Wednesday night's dinner rush, who declined to share her name, was more vague about its future, saying the eatery was shuttering for an unknown period of time due to proprietor James Moffett's health.

"The owner is not in good health and we are closing indefinitely," she said. "It may be a week, a month, a year — we don't know."

One EVG reader who went for a last meal there Wednesday night was told by the waitress that that was it for the Great Jones while the bartender said they might reopen. The reader had the impression that no one really knew what was going to happen with the place. Other accounts of the evening (here and here, for instance) didn't hint that the Great Jones Café will ever be back.

For what this is worth, Yelp has already stated that the Café is permanently closed... 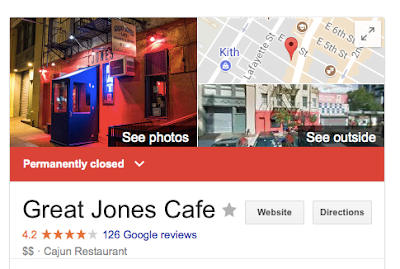 And there are some longtime Café regulars who feel the place died when longtime GM Bill Judkins was dismissed back in March, taking his 45s from the acclaimed jukebox with him.

Previously on EV Grieve:
After 34 years off the Bowery, the Great Jones Café closes tonight (79 comments)
Posted by Grieve at 4:10 AM

what are the cooks and kitchen staff supposed to do? sit around for a year in hopes it will reopen? is the owner paying them during this closure? awful situation

This isn't about greedy landlords pushing out our old timey restaurants. The owners sare arguing over the Christmas lights and paper menus! What bunch of wooses. If they were a new restaurant opening on the Bowery -- where most dreams go to die --they wouldn't stand a chance. They should realize how fortunate they are and reopen while they work ot their "artistic differences."

More likley not in a week.

The Great Jones Café will never be back the way it was. Should they reopen, and most likely they would--new owners will wait until the lamentations have died down-- it won't be the same. It would be a simulacrum of GJC. Yet another authentrification.

Once it goes Yelp, it never goes back.