We've looked at a few of the applicants on this month's CB3-SLA docket, including Joe and Pat's ... and the Ainsworth East Village.

Here are two more items of possible interest on the schedule tonight. 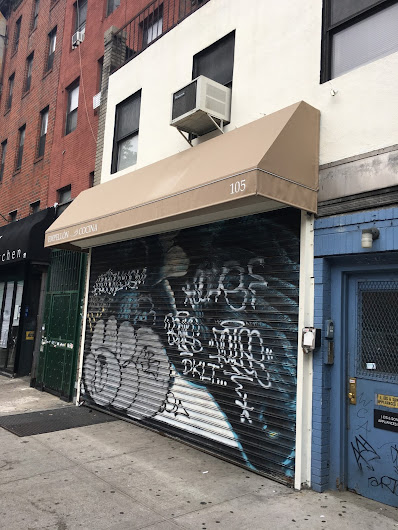 A "contemporary American" restaurant is being planned for 105 First Ave. between Sixth Street and Seventh Street.

The applicants, who have experience at the Blind Barber and Drexler's on Avenue A, are behind this venture. The paperwork (PDF here) on file ahead of tonight's meeting shows seating for 44 via 14 tables as well as one bar with 10 seats. The proposed hours are 4 p.m. to 2 a.m. Monday-Thursday; Friday until 3 a.m.; Saturday from 11 a.m. to 3 a.m.; and Sunday from 11 a.m. to 2 a.m.

The questionnaire did not include a sample menu.

Empellón Cocina closed here in May after five years in service. 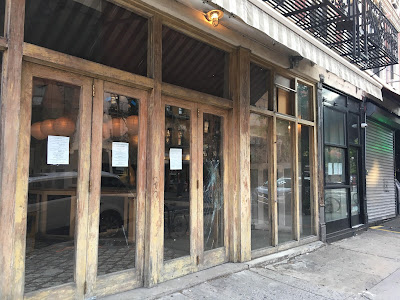 Boris & Horton, billed as "New York's first dog friendly coffee shop and community space," is the concept for the former Ost Cafe and Raclette spaces on Avenue A at 12th Street.

The questionnaire at the CB3 website (PDF here) shows proposed hours of 7 a.m. to midnight seven days a week. The operators are seeking a beer-wine license to go alongside menu items such as sandwiches and paninis.

A help wanted ad on Craigslist offers more information about the business:

In cooperation with the Department of Health, Boris & Horton will serve coffee and snacks in a dog friendly environment. The coffee bar will be glassed in with double doors leading to the dog side, which will feature café style seating and upscale pet products. We have a lifelong passion for animal rescue so Boris & Horton will be a hub for adoption events and fundraisers.

The principals are listed as Coppy Holzman and his daughter, Logan Holzman.

Ost Cafe closed in February after nine years in business. Their owners said that it had "become too expensive to stay open any longer." The Grand Street location is still in service. Raclette moved from its 14-seat space on A around the corner to the former Northern Spy on 12th Street last fall.

The July CB3-SLA committee meeting is tonight at 6:30 at Ian Schrager's Public Hotel, 215 Chrystie St. just below Houston.
Posted by Grieve at 4:20 AM

I know the wrath of dog lovers will be swift and brutal but the staggering increase of the EV dog population is a bi-product of the neighborhood's on going gentrification. Not only has the amount of dogs increased but the average dog walking our streets is an expensive pure breed. More grooming and dog related businesses have opened in the past 5 years to profit from this puppy boom and now this bizarre pet friendly cafe will try to blur the rules of hygiene at a place where food is served to humans. Imagine dog run behavior in a small place, barking, sniffing and "accidents" all day long. I have nothing against dogs, they are wonderful loyal pets but some dog owners truly believe they are equal to humans and think their is no place that should not allow their dog to enter. If this place succeeds in opening it will be circus and I doubt they will make any money with pet owners hanging out for hours talking about their dogs nursing a cup of coffee.

Why does a cafe for people and their dogs need a beer and wine license?

LOL @ Anon 9:45.
While I too loathe the corny, suburban douchebags that transported their precious little purebreds over here, I have no problem with well-behaved dogs and the scenario of you saying they would want to bring their dogs everywhere, is exactly WHY this wouldn't be a bad thing. It would literally cater to them instead of them going somewhere that might make YOU uncomfortable.
So take it down a notch, son. It's all good. It's just a coffee shop with a separate section where dogs can chill.
Don't go if you don't like it.
And let us work together to get rid of the entitled and corny post-grad douchebags.

read the article again, if you are too tired I put it in a nutshell, big space with glass doors dividing it, one side serving coffee and I assume small eats for humans, the "other side" will be seating and tables for humans and dogs will be allowed there. I can tell you right now few popes will stay on one side of those glass doors and there will be a free flow between the 2 sections. Why is this important, it goes against the department of health's rules. To me this is one more gimmicky establishment which will attract tourists more than locals.

"And let us work together to get rid of the entitled and corny post-grad douchebags."

Another great thing about dogs: they're not judgmental, envious, or threatened by people's credentials.

Upper Avenue A is saturated with bars. We don't need another place getting a beer and wine license, shutting down, then selling it to another business. I have a dog, by the way, and love the idea of a cafe that caters to people and pets, but I am fine drinking coffee or tea. I don't need to drink beer or wine when I am out with my dog!

Good point 5:30PM, "oh the dog cafe didn't work out so we are now a sports bar, woo" No more liquor licenses on this block or part of Ave A.

What if the dogs don't like each other? I have seen near fights with people walking dogs, it doesn't even matter what breed, although the little toy dogs seem to instigate more.

This is clearly a ruse. If it's a place designed for people to bring their pets, why it's needed when most people go to the parks with their pets and dogs prefer and love to be outside, why the hell does it need a liquor license. So other rich hipsters and yuppies can get loaded on 10 dollar glasses of wine and go on their way? This will eventually devolve into another bar that will shut down in 2 or 3 months after this concept bombs.

And why not because clearly these creative types have money to burn, whether their own, from LLC's, or maybe from tax abatements since running businesses before.

Remember when Superdive said they intended to be a bookstore that served wine at readings? LOLOLOLOL.

Did anyone attend this meeting, curious what happened.

Allegra Hobbs from DNAinfo was there (per Twitter). She tweeted something about the dog cafe. Sounded to me as if it got the OK. I will update when she posts her article.

@9:08 - Of course not, we're all too busy bitch bitch bitching to actually DO something.

I'm thinking of opening a "kids" cafe with toys and a nap area for the kiddies and a full liquor bar for their parents nearby. Since small children are a bigger pain than most dogs these parent can get sauced so changing diapers will be more fun.

They have that already, it's called the teacher's lounge.

Can anyone read? Beer and wine isn't the same as liquor license. And it's in the same space as Ost, which had a beer and wine license and which you guys were mourning just a few months ago!

7:38 am no we cannot read-too much drinking.