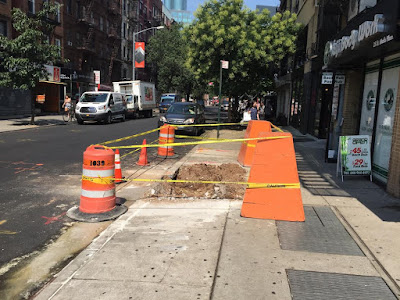 The other pay phones remain up for now on this block between Second Avenue and Third Avenue, where the LinkNYC will sure to be put to good use. 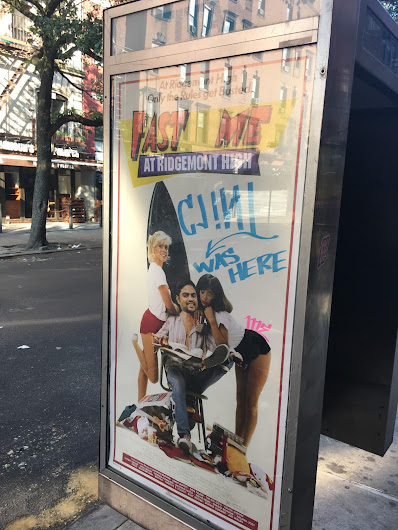 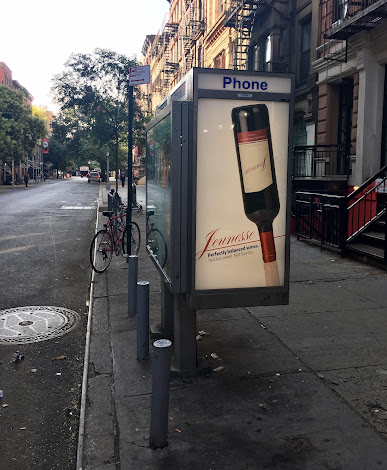 Despite LinkNYC's tech advances (Wi-Fi, device charging, access to city services, maps and directions), they do not provide ample space to, say, mix or hold beverages like the pay phones on the block ... 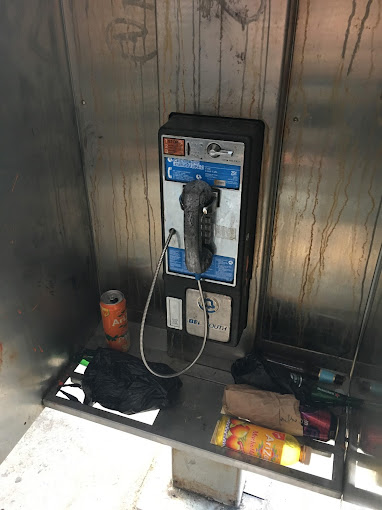 So, another branch of the Crusty Hotel chain. I feel sorry for whatever store will be hosting it outside their door.

Will the Pee phone be updated

It just occurred to me that must be what they're breaking ground for at 8th and B—and why they're taking so long!


Why oh why did the turn over valuable street space to these oversized chargers? On my street we have one on each end, like monstrous bookends.

I can't believe no one in charge will admit these things are a colossal failure. They are reviled!!!

There is a homeless couple living at the kiosk on 1st Avenue and 6th Street :(

Superman will have to become Thinman in order to change behind one of these Wifi towers.

What is with that ad ripping off the Fast times poster?

As reported in the new SHADOW, the CityLink kiosks are for SPYING on us. Not only are there surveillance cameras on each side of the kiosks, they also download your data when you plug in your usb.

We cannot post the article here due to too many characters -- you can buy a SHADOW at these locations (only $1.00):

This idea is a FAIL. But the city will go ahead and spend the money to complete the project that never should have began. It was out of date before they installed the first one.

Thsee things are a beacon to the homeless to camp out on the sidewalk for an extended stay. The WiFi is pretty useless in the area's these are loccated.

Re 3:01 every time your phone is charged it gives off Data, When u pass a cell tower it pings it if u have nothing to hide Relax and melt in the crowds

There are FOUR of these big ugly (sometimes loud) kiosks on 1st Ave between St. Marks and 7th. WHY would that EVER be necessary? WTF is that about? They get in the way and they ruin the look of the street plus they're just crusty magnets. No one else uses them. You know why? Residents can easily charge at home or at a restaurant or the library or wherever. These were never meant for us. They're for tourists and their overly-bright ugliness are ruining the charm of our neighborhoods. People should always get fired over dumb money-wasting decisions like this.

To Anonymous 10:31AM -- May you be the first arrest for your pure stupidity.
You think you have nothing to hide? EVERYone has something to keep private. For example, please share your social security number with us all. No? I didn't think so. Or would you like your job to get an alert when you're in the process of looking for a new job? No, you wouldn't. You don't have to be a criminal to keep private information. Unsure why this needs to be explained to some.

There are 12 (12!) of these grotesque eyesores on 2nd Ave. between 13th St and 7th St. You can actually SEE the next one from the last. On some blocks they are on BOTH sides of the Ave. Who decided we NEED all this sidewalk crap in our neighborhood? Take a quick guess on how many of these disgusting things are on Park Ave. and Madison Ave.?

The idea is for there to be a seamless network of fiber-speed wifi all over the city...wifi doesn't have a long range so that's why so many locations. I agree though that they could have done without the screens and tablets etc.

They should have just set up as 911 and wifi towers with advertising for revenue
the screen, free calls, charging is a complete FU
WHO did they actually think would use these besides the homeless??

We definitely need to keep wifi available to those that can afford it. Universal wifi is as dangerous as to universal health care to our society. Poor people may even have opportunities to advance!!!