More about Boris and Horton, the dog-friendly cafe coming to Avenue A 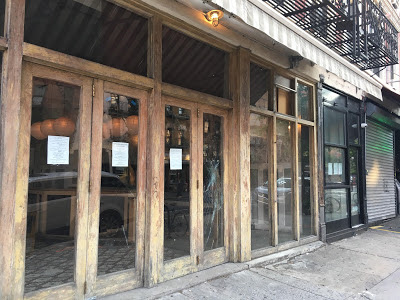 [The same photo I posted on Monday]

Back on Monday, I reported that Boris and Horton, billed as "New York's first dog friendly coffee shop and community space," was in the works for the former Ost Cafe and Raclette spaces on Avenue A at 12th Street.

The applicants, Coppy Holzman and his daughter, Logan Holzman, appeared before CB3's SLA committee meeting that night for a new beer-wine license.

Allegra Hobbs at DNAinfo was at the meeting, and has more details in this article:

Boris and Horton, named for owners Coppy and Logan Holzman's respective pooches, will be divided by a glass wall into two sections per Department of Health rules — a cafe side will offer up beverages alongside pastries and sandwiches, while the pet-friendly side will provide a lounging space for folks with dogs, plus a photo booth and pet supplies.

"It's like basically going to someone's nice living room with your dog, and it's adjacent to a place where you can get all your food and coffee," said Coppy Holzman.

Patrons are free to move between the spaces as long as their dogs stay on the designated dog side, explained the Holzmans — and staff will be on hand to momentarily watch dogs if an owner has to dash to grab a coffee.

And dog-less New Yorkers who just want to hang out with a bunch of dogs are welcome throughout, they said.

The CB3-SLA committee approved the application with some stipulations, "including installing soundproofing and monitoring noise from canine visitors."

Boris and Horton is expected to be open this winter.
Posted by Grieve at 4:30 AM

Email ThisBlogThis!Share to TwitterShare to FacebookShare to Pinterest
Labels: Boris and Horton, dogs

I can't wait to stand outside and watch what happens in this place, it will be hilarious. "Sir your dog just jumped up and ate my $12 sandwich" "don't blame my dog you should know better than leave it unattended for even a second".

cue all of the curmudgeons! we already have 2 joining us.

The idea of fleas, dog poop/piss, incessant loud barking, dog hairs over all the "lounging area" does not appeal. Of course the dogs will stay in their assigned place and not smell all the goodies, will not make a run for them. Of course the owner will be too busy talking/eating to watch his or her pet and voila, yet another incident ---like the dog needing to take a shit or piss in the middle of the room, stinking up the area. Of course we naysayers are just being mean to all the cute doggies. Whatever.

I too will laugh when the place eventually shuts down.

My dog once took a big shit in the middle of a dog-friendly cafe, and I was both horrified and impressed at the same time.

Don't anyone dare mention that besides being "humans best friend" dogs are still animals. Although most are well trained some will aggressively act out when around other dogs. Unlike a public dog run where upon entering you lose your right to sue another dog owner for any damage their dog brings to you or your dog this will be a very different liability situation. I hope the owner have considered this and have set such insurance policies in place.

But are they using this gimmick to get a beer and wine license? So, yeah, the gimmick might not last, but they'll have their booze.

hey 9:43 here is a novel idea. don't go there then. people on this blog constantly bitch about bars coming in and people not supporting local businesses then when a new business comes in that offers something different and is likely to draw in locals to actually support a local business that isn't a bar you bitch. i love how you people constantly want it both ways.

Nope, not on the side of the naysayers here. No one has to go in who does not want to; for myself, I look forward to hanging out with a bunch of happy pups and maybe slip them a dog treat now and then. Look forward to the opening.

I'm eating my gluten free popcorn over here just waiting for the first big dogfight to break out.

Sounds great, a dog friendly place - my worry would be, how safe is my dog -
could anyone just go in and get their own dog and not anyone else's ?
How easy would it be to steal a dog ?

12:03 is Spot on! The E.V. Gripers bark louder than caged animals and every post someone has a bone to pick. Okay, I'm done. But seriously, most of the people here really are all bark and no bite. Sorry.

Why would you go there if it's disgusting to you? Why do you care?

If my memory serves, I used to live near The Grey Dog Cafe in the 90s. Dogs were allowed with the serving of food and I never noticed a problem. Also, back then dogs were allowed inside many cafes, whether it was legal or not and there usually was no problem.

i'm amazed that all the no one is aware that the BEAN (3rd/2nd) and (9th/1st)---have always allowed dogs with only a few minor incidents---why all the fuss (wait---it's just because the curmudgeons on this site would like this place to fail (and it's not a bar)---such BS!!

@3:02, what about the people that snark at the snarkers that snarked at the first snarkers? What do they do???

CURmudgeons have no business snarking in the first place.

Well I was talking to some fellow dog owners at the Tompkins Square dog run and we're all looking forward to trying this place out. I've brought my dog to many doggy cafes, and he's hung out at The Bean many times, without incident, except for the time he pooped in a doggy cafe. I cleaned it up. People laughed. No one died.

12:45pm - 9:43pm sounds like Bret Easton Ellis is back for a bit at his NYC apartment LOL. It sounds like something he wrote for an early draft of American Psycho.

Don't forget bites and fights. I wold LOVE to see a dog lift up its leg and piss on a hedge fund manager's custom-made Armani suit pants leg LOL.

I'm glad that people have mentioned The Bean; both locations in this neighborhood have been serving people with dogs for a few years, and mostly without incident.

In addition, there's been The Grey Dog, which formerly did let people in to eat and drink with their dogs; this—in a few locations—also was a welcome hangout. They finally had to amend their policy and no longer allow dogs a few years ago, so this place is going to take up some of the slack.

I am planning a Curmudgeons Bar. People can come in and complain about what a lousy bar it is. Mudgeons welcome too.

The city is already a "dog friendly" place, you can walk down any street with your dog on leash likewise city park with the exception of children's playground. Most apartment buildings allow pets, you can obviously bring your dog to the vet. Where you can't bring a dog are places where your dog has not business being, places where food for human is prepared and served and you should all know this is against the laws set by the Department of Health. When exceptions are made as in this case what is to stop other food establishment from bending the rules? Those that think there is no reason to ban dogs from restaurants should write your elected officials to remove this law. Someone might want to bring their pet pig in this cafe would anyone object to that?

makes a lot of sense---dog owners should ban their dogs/cats from home food preparation areas---while we are on a mission---let's ban cats from bodegas/delis---once AGAIN---give the 'moralistic' BS a friggin rest......

"give the 'moralistic' BS a friggin rest......" morals has nothing to do with sanitary condition when feeding the public.

If you read the article then you would have seen that because of health regulations the dogs will be kept on one side of the partition and the cafe will be on the opposite side. Know your facts before commenting.