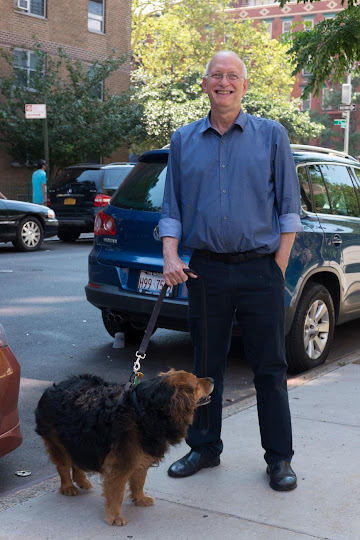 I’m originally from Brooklyn. I moved to the neighborhood when I was in college. It was a place where I could get a cheap apartment, and they weren’t very particular about who rented ... I don’t know if it was actually the worst neighborhood in New York in terms of the crime, but it was one of the few.

So I moved here in 1970, and I lived on 3rd Street between 1st and 2nd Avenue right near the Hells Angels. The buildings on either side of me were abandoned. One of the things we did that first summer was rush out of the building when the fire engines came because there were inevitably fires there. A lot of homeless people lived in the buildings – we didn’t call them homeless people then, we called them street people.

I was a college student and a young writer, and there were lots of other young writers, painters, dancers, and theater people. As students we had no money, and as bohemians we continued to have no money. It was filled with people who wanted to have the opportunity to make art and live cheaply.

I graduated from City College, and many of us stayed in the neighborhood because we could live here and work a couple days a week and make art. A friend of mine ... had a tiny gallery on 5th Street, and then more and more galleries started to come – and there was a very active scene in the 1980s into the 1990s.

But at the same time also things like the Nuyorican Poets Café first opened in the 1970s, so it wasn’t just a white scene, it was a multicultural scene. There was a genuine mix of people. I used to say that everybody in the neighborhood hated each other, but everybody got along because they had to. I’m not saying that the Latin families in my building across from me were particularly friendly to me, but they weren’t unfriendly. There was no hostility. Everybody was basically poor – so that was a great leveler.

I was primarily a poet. I ran readings in various places with a couple of friends, Chuck Wachtel and Harry Lewis, also poets. Chuck is a distinguished novelist as well. I eventually started to work in documentary and was a screenwriter, and then I came back to documentary. It was independent, it still is, but I also make films for places like National Geographic, Discovery, A&E — all sorts of documentary channels. So that’s what I’m doing now.

There was a great energy here. There had been people here in the mid and late 1960s before us who had been the original bohemians in this neighborhood, and that just grew, and it continued to grow through the 1970s. There was a very active jazz scene in this neighborhood. I was a bartender at a jazz club called the Tin Palace, which was a central place where young musicians came and played, and I also ran a reading series there.

The thing that has always made it special is the remarkable mix of people that live here, and still live here despite the gentrification. I raised two daughters here, and I chose to raise two daughters here along with my wife because it was a place where you had every imaginable kind of person, every income, from people with fancy apartments to people who could barely meet their rent. There were people who were interested in everything — in art, in politics, in every imaginable activity that the city had. They congregated here, and not to the same degree as they did, but they still do.

I think the fact that this neighborhood always had that incredible mix of artists and real people, and people from different backgrounds and different cultures – it’s always been a very alive neighborhood — and that’s what I wanted my children to experience, and I think it made them good people. They accept difference in every aspect of things.

James Maher is a fine art and studio photographer based in the East Village. Find his website here.
Posted by Grieve at 8:30 AM

For those who don't know, Lorraine Levine was Molly's owner and Brian's mother. Here is the evgrieve obituary for beloved Lorraine:

Great guy, and interview. As an EV lover, I'm heartened that he thinks that a lot of the good old elements of the neighborhood are still here. We need to stay optimistic and rooted in our strengths, as we fight the forces of neighborhood destruction.

There is a great wiki on the Tin Palace at https://en.wikipedia.org/wiki/The_Tin_Palace

"I think the fact that this neighborhood always had that incredible mix of artists and real people, and people from different backgrounds and different cultures – it’s always been a very alive neighborhood — and that’s what I wanted my children to experience, and I think it made them good people. They accept difference in every aspect of things."

Sad to say that this is a thing of the past. Oh how I miss the energy of the neighborhood before it became the burbs and the crowded Entitled Village full of the terminally hip.

It' so refreshing to hear the perspective of a happy native that understands this neighborhood is still unrivaled.

For as much as it has changed, I can still go out and about the neighborhood and interact, and have good conversation, with some really good people.

I saw this guy's face -- open and good-humored -- and knew I was gonna like him!

I laughed when he said "there were two blocks in the neighborhood"... because I KNEW one was gonna be my current block: the Hell's Angels block. I've only (only!) been on the block for 17 years, but when I was a wee newbie to the city in 1990 I used to walk home late at night from the Nuyorican to my place on 22nd and 8th (which was much further along in the gentrification process -- tho still not all pretty-pretty) and feel TERRIFIED...but also determined to face my fears And also too poor to take a cab. The only block on which I could take some relieved, non-hyper-alert breaths was the Angels block. And now I live here, in an ever-fancypantsing neighborhood.

When we moved to the block, we had my late dad's old car -- I forget what it was (a Nissan Maxima, maybe?) but it had very easy-to-steal headlights. They'd practically pop right out. They were stolen twice in the first three months we were here. My husband knocked on the door of the HA clubhouse (over my objections) and asked if they maybe had footage of the thefts on their cameras. The guy at the door stared at him for a minute, then said he'd check. A couple of weeks later, he approached my husband on the street and said, "We don't have it on camera. But we know who did it. And it won't happen again."

Anyway, wonderful interview! I love James's contributions to the blog. And I hope I see Brian and Molly on the block sometime.