'Before we got Starfucked' — an exhibit on Avenue A tomorrow evening 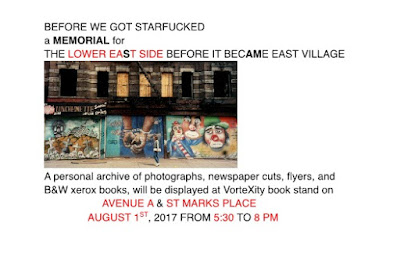 Jen Fisher, who has operated the book stand on Avenue A at St. Mark's Place the past four years, is hosting an exhibit of East Village history at the space tomorrow evening.

Here are some details via the EVG info box...

A personal archive from the late 1980s to early 1990s of photographs, newspaper cuts, flyers and B&W Xerox books will be displayed on Tuesday, August 1 from 5:30-8 p.m.

The archive is based on 1980s and 1990s events such as The Tent City in Tompkins Square Park, the annual Stations of the Cross, Father George Kuhn, and the fight against gentrification as it was recorded and put together by a resident of the Lower East Side. Seen in the light of today's ongoing destruction of our neighborhood, we believe that this archive has acquired historical relevance as a record of the Lower East Side and the life it once contained. 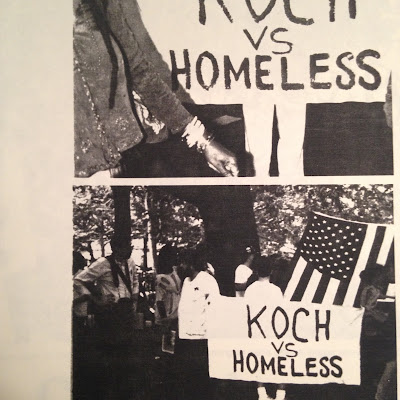 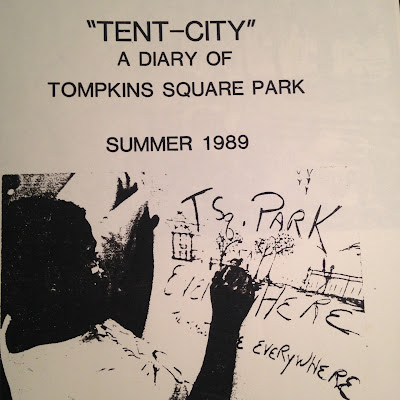 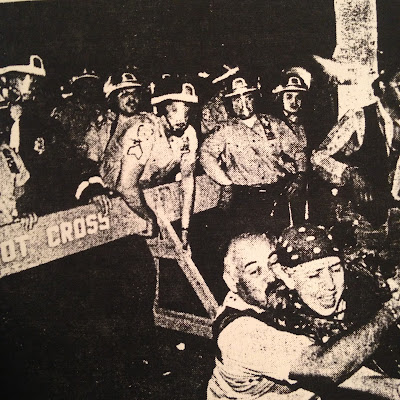 Previously on EV Grieve:
Starbucks confirmed for Avenue A
Posted by Grieve at 12:30 PM

Destruction of our neighborhood? Really? And who had to kicked out before you could move in? The EV and the LES are always changing. Wave after wave of different immigrant groups have been coming to these neighborhoods since the early 1800s. One replacing the next. The buildings were nice when they were put up and then they were torn down, to be replaced by nice buildings when they were put up only to be torn down. Today the buildings going up are nice.....come back in 100 years to see them torn down.
Italians, Polish, Ukrainians, Russians, Romanians, Irish, Puerto Ricans, Nigerians, Catholics, Muslims, Protestants, Jews....one after the other.
So get real..you don't own the EV. Never did and never will. Your history of the past 20-30 years is just a chapter in the long and evolving history of one of the most interesting and diverse areas of Manhattan. Instead of knocking it for what is happening to it or has happened to it, you should be celebrating the fact that the EV is alive. Yes, it is ALIVE. It has a life of it's own that neither you nor anyone else can dictate. It fulfills its own destiny.

The last photo is my buddy Stacy getting grabbed by an undercover kop during one of many weekend skirmishes with riot kops that summer of 1989.

Oh, and to AnonymASS 9:57: I was one of those people fighting to keep our neighborhood and its special identity intact before, during after riot days in the 1980s and beyond, as NYPD forces were mis-used by the city to facilitate the gentrification to come. WHATTHEFUCK do you know about DEFENDING your community, you name-less root-less carpet-bagger?? FUCK OFF, why dontcha?