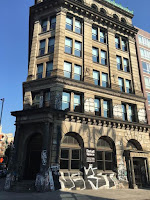 The news yesterday was that fashion emporium Totokaelo has signed a lease for 8,918 square feet at the landmarked 190 Bowery.

Totokaelo, which sells designer lines such as Acne Studios and Jil Sander, plans to open a pop-up shop from this fall to March 2018. A rep for owner Aby Rosen’s RFR said that he hoped it would turn into a longterm deal.

Whoever the tenant will be needs deep pockets. According to the Post: "the asking rent for the retail space on the ground floor, mezzanine and basement was $2 million a year." Or roughly $166,000 a month.

Previously
Posted by Grieve at 4:00 AM

I'm thinking dollar slice joint... Hold a sec while I do the math...

Mr. Rosen should have a good return on his investment in no time. Good for him our global economy can afford loss leading mega flagship stores until a few mega online retailers put and end to brick and mortar retail.

The high-end reincarnation of the Bowery isn't going to happen. Unless they're opening a liquor store or an escort service they'll never make that rent.

Liquor store or escort service? Why not both?

There was a fire here a while back, on the roof if I remember. They had a terrible contractor there I believe they were called Tri Star Construction. They are know for low quality work and double charging clients. At least that what was reported in the news at that time. 2 million in rent, no honest retail business would be able to afford that kind of rent and make a profit. Once again greedy landlord with empty spaces.