Somebody's been watching too many heist movies https://t.co/qrXMoZPhCE

The NYPD has arrested a man for attempting (unsuccessfully) to rob three local banks, two on the Lower East Side and one on Broadway near Astor Place.

"This was a very bad bank robber," a police source told The Post, who reported that cops arrested Richard Callison, 22, of Oradell, N.J., near 14th Street and Third Avenue.

During his attempted robbery Tuesday at the Bank of America on Delancey Street:

[He] also failed to make off with any dough, despite passing the teller a note that said: “Give me all the big bills, make the wrong move and you will get shot.”

The missive ended with the words: “Rapido, rapido.”

The teller was not intimidated by the note, and simply locked her drawer and walked away from the window, leaving the crook standing there empty handed, police sources said.

Neither here nor there but the suspect does have a passing resemblance to Spaulding Smails from "Caddyshack." 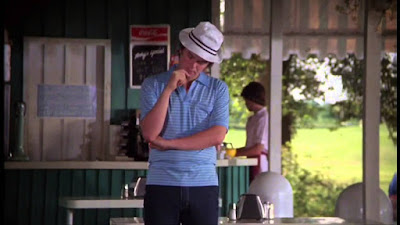 "The teller was not intimidated by the note, and simply locked her drawer and walked away from the window, leaving the crook standing there empty handed, police sources said."

Idiot teller if you ask me. The bank is insured and I sure as hell wouldn't risk my life to save a $238 billion company the hassle of having to fill out an FDIC form.

I was on 14th Street coming from Union Sq yesterday at that time and was amazed at the number of cop cars heading to 3rd Ave. they were parked behind each other from 3rd ave almost to Irving Pl. I crossed the 14th being a coward and not know if bullets would soon start flying.

The tellers at the BoA on Delancey are behind a partition, which I'd assume made him/her walking away far less of being at risk for harm...but I guess calling someone an idiot is another way to go.

Reminds me of that Woody Allen movie "Take The Money And Run": https://www.youtube.com/watch?v=l9OAx4ZQ3yg

This is why we need a wall between New York and New Jersey.

I think he looks more like Lawrence from Full Metal Jacket.

Reminds me of that Woody Allen movie "Take The Money And Run": https://www.youtube.com/watch?v=l9OAx4ZQ3yg

Isn't that the movie where he grew up in the house under the Thunderbolt at Coney Island, so he couldn't eat soup unless he timed every spoonful for when the coaster was on the opposite side of the structure?

And that he played a cello in the marching band? Classic.

People, it isn't that hard to make a clickable link: https://www.youtube.com/watch?v=l9OAx4ZQ3yg

I suspect there is something no right about that boy. Not that all bank robbers are mentally ill but he really didn't do the fun part, wearing a rubber mask of who ever is president, get into an awesome ninja outfit, not of it.

Hey Pinch the teller not taking the robber seriously she endangered the lives of everyone not protected by the partition. What if the robber had a gun? The teller should be fired.