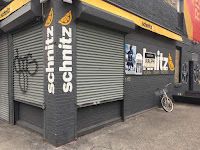 The applicants are on the January CB3 docket for a beer-wine license. (This item will not be heard during the committee meeting on Jan. 9. This was also a sale of assets.)

According to the questionnaire (PDF!) on file at the CB3 website, the restaurant will be open daily from 11 a.m to midnight. The owners also plan on operating a four-table sidewalk cafe with 12 seats from 11 a.m. to 10 p.m.

The application doesn't include a sample menu. Perhaps Little Tong Noodle Shop will be able to pick up a few of the customers waiting three storefronts away for Momofuku Noodle Bar.

Schnitz, which served old-fashioned schnitzel sandwiches with unconventional toppings, was in operation from March 2014 to August 2016.

Something Sweet, the family-owned bakery, was here until July 2012.

Welcome to Hong Kong on the Hudson. Anyway, the more Chinese food places the better, we already have more than enough sushi and Japanese street food places to keep everyone happy.

Sounds WAY better than schnitz. Not that schnitz wasn't good, but it's not something we eat often.