Crews will be around several streets tomorrow filming scenes for the CBS political drama "Madam Secretary" with Téa Leoni...

Among other places, they'll be filming on Third Street between First Avenue and Second Avenue, a block that has received a lot of attention already this week... and where EVG correspondent Steven spotted this filming notice... 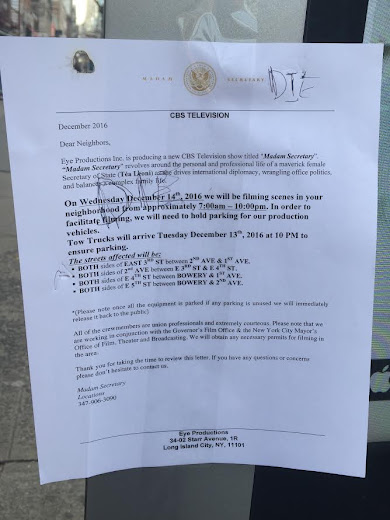 EVG reader Mr. Baggs noted that the film crew has placed their own cones along the block today. Hopefully there won't be any cone confusion.
Posted by Grieve at 1:00 PM

"Oh, a FILM shoot! Sure, go ahead and move the cone! Sorry for the bullet wound"

that explains the huge NYPD presence....don't want film crews frightened off when making their movies on the set that has become NYC....

Hey chris flash this is an example of someone legally securing parking spaces with cones, your pals at Hells Angels headquarters should try it sometime.

At least we know if someone tries to take one of these spots they won't be accosted by someone with a gun.

GTFO out of here CBS you geriatric fucks. "Tonight, on an all new Murder, She Wrote!"

I live across from the HA clubhouse and the noise from those stupid film trucks kept me awake last night, yet I slept through the gun firing on Saturday night. wtf.