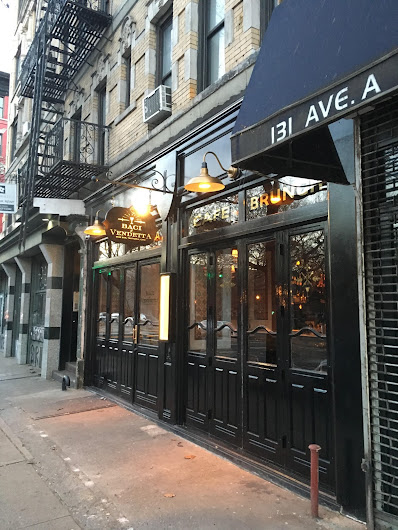 The plywood came down yesterday to reveal Baci e Vendetta, the new wine bar-cafe at 131 Avenue A between St. Mark's Place and Ninth Street.

This prime space across from Tompkins Square Park was the 10 Degrees Bistro until the fall of 2015 ... and the Flea Market Cafe before that.

Back in December, CB3 OK'd a beer-wine license for the owners of Shoolbred's and Kingston Hall (and formerly Ninth Ward) on Second Avenue. The CB3 meeting notes refer to the new establishment as "a New Orleans Cajun restaurant."

Baci e Vendetta, Italian for Kisses and Revenge, doesn't have much of a Cajun ring to it. Anyway, we're not sure at the moment who's behind this venture that debuted last night.

Be transported to another era. Our bar features 6 varieties of wines on tap including prosecco. #nyc #bar pic.twitter.com/ZiQdzHx0s2

Here's a look at the food and beverage menu... (click on images to go big) 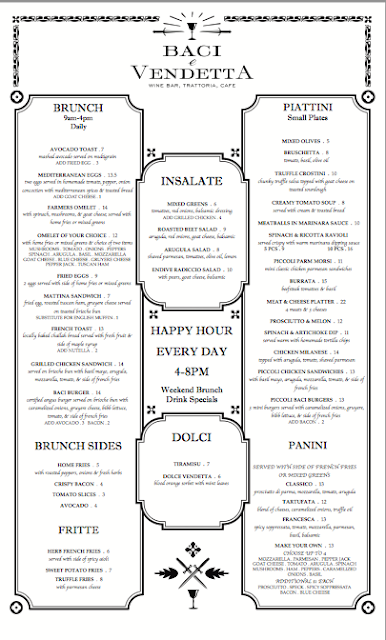 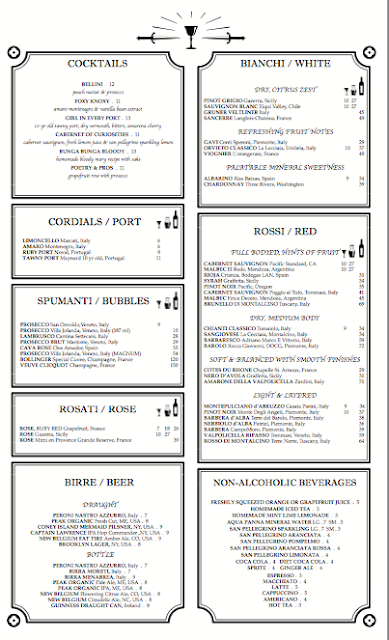 According to the Baci website, these are the hours:

Team behind Shoolbred's and Ninth Ward vying for 10 Degrees Bistro space on Avenue A
Posted by Grieve at 4:10 AM

Any bets on how long till the gas is turned off?

The menu with all its small plates looks like brunch everyday. My guess this place is geared to Gen X to early Millennials.

Why do they have gas and residents have no gas?

Seems chill and normal if it doesn't become a well-to-do douche fest. A little pricey but whatever. Rents are fucked.

Their other two, Shoolbred's and Kingston Hall were spilling out with Santas last week.

I'm unconvinced that wine on tap is a good idea.

Had brunch there today with my grown daughters -- it was delicious and not too pricey at all. C'mon - it's not a diner! Waitstaff was super pleasant and attentive, atmosphere was serene and quiet. Give it a shot - unless you want to see another 7/11 in the spot......

It's hard to understand why someone would bother opening a restaurant in the neighborhood with such a banal menu. A beet salad, a burger, avocado toast, chicken sandwiches - every item on it is as commonplace as can be. It's depressing - the east village used to be a place where people came to take risks, and here is a new restaurants with a menu that wouldn't be out of place in any airport, mall, or suburb in the country.

Seems like the previous owners had their say to name this place. It's like an F U to those who called out Ten Degrees bistro on how TDB manipulated its way of obtaining the liquor license from Flea Market bistro.

Hope this place will welcome the locals/natives and senior citizens, unlike Ten Degrees bistro, who only welcomed the pretentious brunchers and weekend warriors.