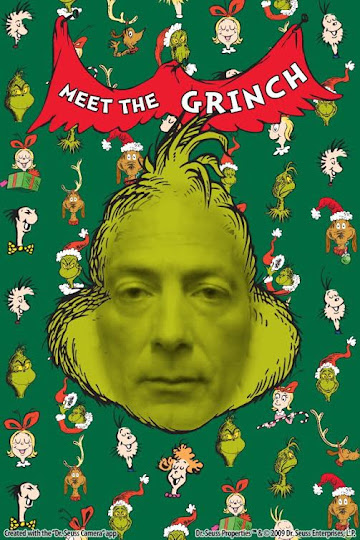 The following is from a group of tenants who rent from Steve Croman's 9300 Realty... several of whom say they do not currently have heat or hot water in their apartments... via the EVG inbox and with apologies to Dr. Seuss...

You're a mean one, Steve Croman
You really are a heel,
You're as cuddly as a cactus, you're as charming as an eel, Steve Croman,
You're a bad banana with a greasy black peel!

You're a monster, Steve Croman,
Your heart's an empty hole,
Your brain is full of spiders, you have garlic in your soul, Steve Croman,
I wouldn't touch you with a thirty-nine-and-a-half foot pole!

You nauseate me, Steve Croman,
With a nauseous super "naus!",
You're a crooked dirty jockey and you drive a crooked hoss, Steve Croman,
Your soul is an appalling dump heap overflowing with the most disgraceful
assortment of rubbish imaginable mangled up in tangled up knots!

You're a foul one, Steve Croman,
You're a nasty wasty skunk,
Your heart is full of unwashed socks, your soul is full of gunk, Steve Croman,
The three words that best describe you are as follows, and I quote,
"Stink, stank, stunk"!

Per The Lo-Down: "According to the tenant association, residents have been forced to endure collapsing ceilings, dust and debris, mold, rats and floods. The lawsuit also alleges that poor security has led to numerous burglaries."

Awww. That's not in the Christmas Spirit.

Meanwhile, the real Grinch is shrieking in protest at the comparison; he feels quite maligned at being compared to that predatory, soulless waste of skin.

Really? Go do something about it. Have a fundraiser to pay legal costs against him, protest outside his house, write op-eds to your newspapers and elected officials. Write a jingle?? No wonder he is trying to take advantage of you!

The Grinch saw the error of his ways. I don't expect a similar transformation here.

To 11:51s point. This is cute and cathartic but won't get results. Having done this type of work before, it's difficult. You need a leader with a vision, a strategy, time and can organize and manage a variety of personalities.

All Steve Croman wanted for Christmas is for his court case to go away. But he was a bad boy and so he didn't get what he wanted. Boo-hoo.

Steven - I thought you were a lot smarter than this - sell your buildings protect your family if you actually care about them if you prolong this you and your family will never survive emotionally your children and your wife are already tainted. Do you remember who you were when you were young and struggling, do you Harriet - or do you have a new face now too lol? Do you really know your children - no one is impressed with you - you're all B listers that was all you were ever going to be think about your children for once settle this before your sons your wife and you go down. Volkswagon?


Here's another song sung by Croman tenants.....
(sung to the tune of White Christmas).

I'm dreaming of a Warm Christmas,
just like the ones I used to know.
We had heat and hot water
and all the things we oughta....
Until Croman came along.

TO anon 1:55 PM...
Those Croman Tenants have done fine so far, Croman's been investigated and ARRESTED!
So please get real and off your high horse about " a leader with a vision and strong strategy...blah, blah, blah .. Those Stop Croman Coalition tenants have successfully accomplished having the " Bernie Madoff of Landlords " ARRESTED !!!!

He's just a thug, with an ugly mug
and a tenant's worst nightmare.
So lock the door's and shut the lights
Cause Falconite's coming tonight...

Here comes Falconight, here comes Falconite
He's stalking you today
He makes his living tailing tenants every night and day
So when you hear his knock at your door
that fills your heart with fright
Don't jump in bed or cover your head
Just send him on his way....